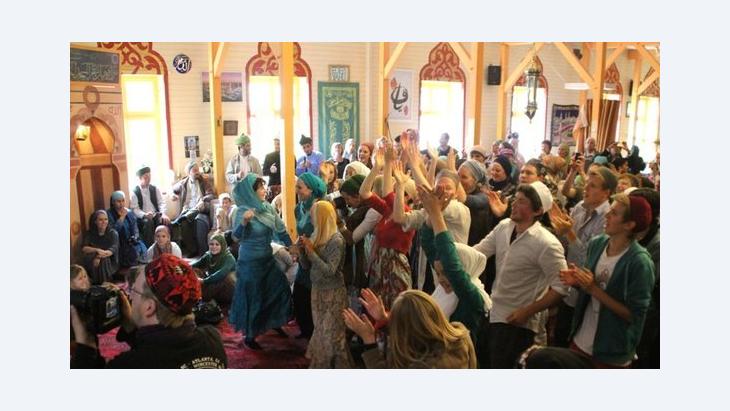 The Musical Path to Allah

﻿Once a year, on the last weekend before Ramadan, a hotel in a village in north-western Germany plays host to the "Sufi Soul Festival". Anyone who is interested is welcome to come and sample a wide variety of music genres: from hard rock to ballads and from Pakistani folk to Arab a-cappella. Marian Brehmer visited the festival in the Eifel region

There are a few astonished faces in the audience at the first gig. Those familiar with the "Osmanische Herberge" or "Ottoman Lodge", Germany's best-known Sufi centre, will know that enjoying life to the full is the law here. But the screeching sound emitted by "Peacock Butterfly" is more what you'd expect to hear at a hard rock concert. The band's bass player has pulled his cap low over his face and sways his hair to and fro. The words "Bismillah-ir-Rahman-ir-Rahim" drone from the loudspeakers.

The audience sits on chairs or cross-legged on the floor in front of the stage. A few dozen of them sway along to the music in a somewhat restrained manner. The men are wearing simple woollen robes and turbans wrapped around a pointed hat. At that moment, Sheikh Hassan Dyck enters the room. The director of the lodge is wearing a turban as white as his long beard. He takes in the gathering through circular spectacles.

Suddenly, the sheikh stretches a hand upwards, waving it like a heavy metal fan rocking to the beat of his favourite group. Then he calls on the crowd to dance. He pulls a long face, imitating the reserved spectators. The first of these are soon jumping up and hopping around on the carpeted floor. Koran verses are written above their heads, on the ceiling. In the corner, a wooden mihrab indicates the direction of Mecca. The windows are embellished with brightly painted ornaments.

﻿"The heart of Islam"

Once a year, on the last weekend before Ramadan, the "Osmanische Herberge" invites the curious to sample a diverse array of cultural offerings. For two days during the "Sufi Soul Festival", hard rockers and balladeers share a stage with Pakistani folk bands and Arab a-cappella groups. Sufis, devotees of the mystical dimension of Islam, travel from all over Europe to attend. A few people have come to Kall-Sötenich from the surrounding area. The centre of Naqshbandi Sufism in Germany is located in a village in the North Eifel region, around an hour's drive from Cologne. 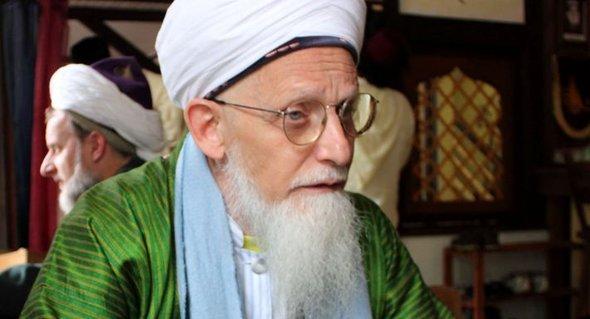 According to Sheikh Hassan Dyck, who came to Islam through his study of Indian music, "Sufism is the heart of Islam. There can be no Sufism without Islam, and no Islam without Sufism"

﻿"People are wary in each and every village in the world," says Sheikh Hassan, speaking in the lodge restaurant. His centre is open to everyone, at any time. But newcomers from out of town are rare. Many people here must regard the Sufis as they would aliens from outer space; long beards and brightly coloured turbans are otherwise only associated with carnival.

The Naqshbandi order is a mediaeval Sufi order originating in Central Asia. While most Sufi orders attribute their foundation to Ali, Mohammed's son-in-law, the Naqshbandi traces its direct spiritual lineage back to the Prophet himself. The supreme spiritual leader of the Naqshbandi Haqqani branch to which the Eifel centre belongs is the Grand Sheikh Nazim, who lives in Cyprus.

Sheikh Hassan, who serves as the Grand Sheikh's representative in Germany, has fetched himself a glass of tap water. He is modest and genuine. Skittle players used to sit at these old fashioned wooden tables. In the pre-lodge era, this used to be a country hotel. Now oriental cushions, Arabic calligraphy and black tea served in glasses lend a quite different ambience.

Sheikh Hassan, born Peter Dyck, found his way to Islam while studying Indian music. He still performs on his cello to this day. His concerts combine Sufi wisdom with the soft tones of his stringed instrument. "Sufism is the heart of Islam. There can be no Sufism without Islam, and no Islam without Sufism," says Sheikh Hassan. Faith needs rules, just like love and a mystical core, he goes on. "It's like a coconut: the sweet milk is surrounded by a hard shell that has to be penetrated first." As far as Sheikh Hassan is concerned, tolerance is the highest virtue, a basic prerequisite of the Sufi path. Without tolerance, he says, there can be no humanity. 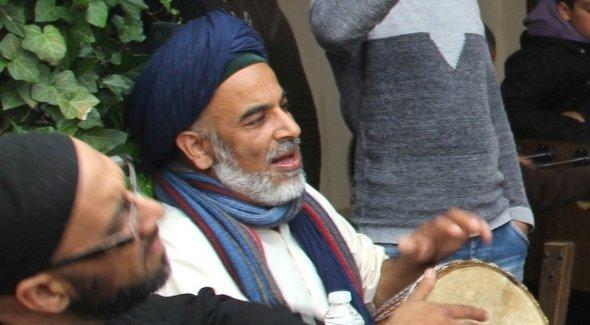 A plea for tolerance and dialogue: since opening its doors, the "Osmanische Herberge" has hosted numerous concerts, lectures and public discussions, seminars on mysticism, exhibitions and other cultural events – all of which are open to allcomers

The "Osmanische Herberge" was opened in the mid-1990s by order of the Grand Sheikh himself. After living in Mecca for a year, Sheikh Hassan went on to run a centre in Düsseldorf. "I do sometimes wonder how we ended up in the Eifel!" He shrugs his shoulders. God moves in mysterious ways.

You could be forgiven for wondering when and if you'll ever behold such a sight in such a nondescript village. Everyone is sitting on benches in the lodge courtyard: Germans, Turks, Arabs, Pakistanis, Afghans and Africans. Falafel and doner kebabs are on sale, the proceeds donated to the centre.

Suddenly music sounds from a corner of the room. A few singers have formed an impromptu ensemble. The rain beats down behind the tent roof. African drums and the rhythmic strokes of the harmonium, accompanied by loud clapping, merge to form a musical river. A Pakistani Sufi sings qawwali hymns, ecstatic Sufi chants from the Indo-Pakistan region. The sounds are electrifying. A small number of women dance joyfully through the tent, their eyes closed.

Mahmud Sabri performs on Saturday evening. The man with a colourful round cap on his head is always a hot ticket at the festival. Mahmud Sabri used to perform with the famous Sabri Brothers. The group, led by Sabri's brother, who has since passed away, enjoys legendary status in Pakistan. Now, Mahmud Sabri is ensuring his family's qawwali live on in Germany.

Sheikh Hassan also sits on the stage during Sabri's performance, swaying his head to the beat with evident pleasure. Anyone hearing the sounds produced by Sabri can appreciate just how inextricably music and faith are being woven together at this moment. The chanting goes on until two o'clock in the morning.

Then the hall is transformed into a dormitory for a few hours. Mattresses are rolled out, and the air is filled with the sound of general snoring. Everyone wakes up for morning prayers at 3.30am, before going back to sleep. 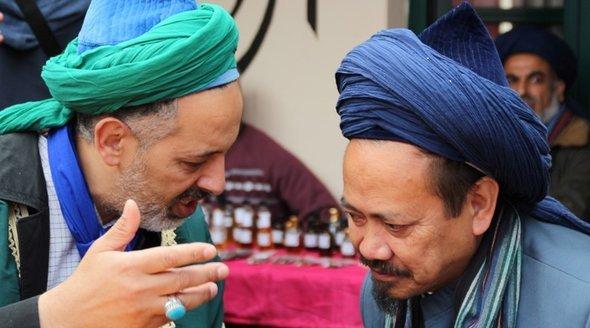 The Sufi Soul Festival is still the best-known event to be organized by the centre in the village of Kall-Sötenich; it has been held once a year since 1999 and plays host to a wide range of German and international artists

A thorn in the side of extremists

The Sufis direct experience of God was always anathema to the dogmatists. "The extremists represent a greater enemy to me than to anyone else," says Sheikh Hassan, throwing his hands in the air. It's a subject that gets him hot under the collar.

"For 1,300 years, Islam flourished and produced high culture. When else in history are you going to find a comparably successful period? And then a few people come along and declare it all invalid," he cries out. He's referring here to the Wahhabis and their spiritual brothers, the Salafists.

Sheikh Hassan and his lodge are used to receiving threats from fanatics. Sufism is not just a thorn in the extremists' side in Pakistan. Increasing numbers of Sufi shrines have been attacked there in recent years.

In actual fact, says Sheikh Hassan, the Sufis would be the ideal partners for Germany in the fight against extremism. He can only shake his head at the ongoing debate concerning the Salafist movement. To date, the German government has not consulted the Naqshbandis on the matter. The Sufis have not even been included in the general dialogue on Islam.

"We're living in the era of ignorance. Humankind is no longer being regarded holistically," says Sheikh Hassan with an emphatic look. The lodge would like to counter this ignorance with a culture of dialogue.

People continually come up to the table to greet their sheikh. He knows each and every one of them, asks after their families, their health. There are also many Germans who have found their way to Islam through the "Osmanische Herberge". Just as in the case of Sheikh Hassan, for many of them it was music that opened the door to Sufism.

Home
Print
Newsletter
More on this topic
Sufis in Germany: In Step with Everyday LifeNaqshbandi Sufis in North America: Going Back to Divine PresenceSufism in Jordan: A Prism of SpiritualitySufism: A Soft Form of Islam?
Related Topics
European Islam, Integration in Germany, Islam in Germany, Mysticism | Sufism
All Topics

Among Muslims, the image of women as "cossetted hijab-wearing princesses" is frequently invoked. But Muslim women have long wanted to be more. In her essay, Karoline Roscher- ... END_OF_DOCUMENT_TOKEN_TO_BE_REPLACED

Even in times of war and pandemic, refugees are still being deported to Afghanistan. Several deportation flights have taken place in recent weeks alone. Since those affected often ... END_OF_DOCUMENT_TOKEN_TO_BE_REPLACED

Surging coronavirus cases in many parts of the world have overshadowed the start of this year's Muslim holy month of Ramadan, with festivities once again curtailed by contagion ... END_OF_DOCUMENT_TOKEN_TO_BE_REPLACED

German Middle East analyst Guido Steinberg and television journalist Ulrich Tilgner have both published new books on the conflicts in the Middle East. Their analyses and their ... END_OF_DOCUMENT_TOKEN_TO_BE_REPLACED

On 27 March, Iran and China signed a 25-year accord intended to foster "strategic co-operation". Despite ongoing uncertainty over the deal's actual scope, content and chances of ... END_OF_DOCUMENT_TOKEN_TO_BE_REPLACED

Comments for this article: The Musical Path to Allah

END_OF_DOCUMENT_TOKEN_TO_BE_REPLACED
Social media
and networks
Subscribe to our
newsletter