A Literary Treasure from Hindu-Muslim Culture

"Hoshruba" is a fantasy epic written in 19th century Muslim India. Now Muhammad Ali Farooqi has produced the first ever translation of "Hoshruba" into any language. In this interview with Lewis Gropp he talks about this unique epic, Urdu literature, and the colonially induced Urdu-Hindi divide

​​"Hoshruba – The Land of the Tilism" was produced in 19th century Muslim India. In how far are the "magic" elements of the epic part of Islamic culture, and: is there evidence of protests of orthodox Muslims against this epic?

Musharraf Ali Farooqi: There is a difference between the reaction to magic and occult elements in the Christian and Islamic traditions. Some Islamic scholars in India did object to the reading of this epic but they grounded their opposition not on the influence of magic in the tale, as, for example, the Vatican does today with tales of sorcery.

When we look at the Islamic tradition we see that the Quran itself acknowledges the power of magic; a chapter contains the mention of witches who cast spells by blowing on knots. It refers to an event when magic spells were cast on Prophet Muhammad by his opponents. Similarly, the belief in the supernatural is also incorporated in Islamic tradition. Belief in the jinns – who are mostly invisible – is an article of faith for all Muslims.

The jinns are mentioned in the Quran, and there are, as well, recorded traditions of Prophet Muhammad's encounters with jinns. Equally, there is a 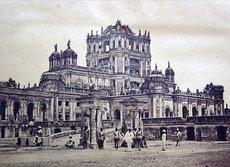 Lucknow in a mid-19th century photograph: it was here that the Hoshruba texts were first compiled. The epic was popular among both Hindus and Muslims

​​very strong tradition of occult sciences of divination that is traced back to Prophet Muhammad's son-in-law and the fourth caliph of Islam, Ali. These are some of the reasons why magic and the supernatural were not objected to in these tales.

The story was found objectionable for other reasons: for example women in particular were advised not to read it because of the prevalence of bawdy and raunchy elements which were unsuitable for their ears. These stories were also found objectionable because their reading did not morally or spiritually improve a person.

"Hoshruba" was written in Urdu – was its audience therefore as mainly Muslim?

Farooqi: No. The two cities, Lucknow and Rampur where these tales were first compiled had Muslim rulers but this was not a Muslim text. It was popular among both Hindus and Muslims. Anba Prasad Rasa, one of the authors of an early version of "Hoshruba", was a Hindu. 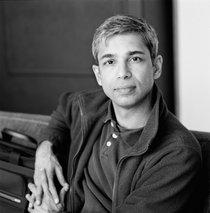 Musharraf Ali Farooqi, author, translator and initiator of the Urdu Project, an online resource for the study of Urdu language and literature

​​The language in which "Hoshruba" was written is now called Urdu but it has been given many names over the centuries including Hindi and Hindvi. It was never identified with any particular religious group until the sectarian linguistic identities were introduced by the colonists and a linguistic divide was encouraged with different scripts for the same language: Devanagari script for the Hindus which was given the name of Hindi, and the Perso-Arabic script for the Muslims which was given the name of Urdu.

So Hindi and Urdu are basically the same language that was linguistically divided by the English colonial rulers… What were the British trying to achieve by this?

Farooqi: Hindi and Urdu are the same language although the language politics in India and Pakistan over the last century has made it very difficult today to break away from the myth that they are separate languages. When people from India and Pakistan talk, they can perfectly understand each other, although one is speaking the Hindi and the other the Urdu language. By encouraging a divide along linguistic lines the British broke the communal harmony in India and greatly neutralized the chances of opposition to their rule from a communally united Indian people.

Belief in the supernatural as part of Islamic tradition: "Tilism-e Hoshruba", by Ustad Allah Bakhsh (1895-1978)

​​How did the British encourage this linguistic divide?

Farooqi: The British encouraged the Hindus to start using the Devnagari script and incorporate more Sanskirit words in their writings. Over a period of time this evolved into a kind of movement. Later on, right-wing Hindu fundamentalists also joined it. The British did it to cultivate sympathisers among the Hindus. Things would not have been damaged still had the Partition not occurred. After that it became very difficult to reverse this identity mess.

"Hoshruba" was modelled on the Persian-Arabian epic "The Adventures of Amir Hamza". What are the traces of Persian and Arabian storytelling, typical characteristics that found their way into Hoshruba?

Farooqi: While "Hoshruba" is a fantasy epic, "The Adventures of Amir Hamza" is a legend of the character named Hamza. There are few written records of this legend in Arabic and Persian traditions as it developed as an oral narrative. We can say that when the Indian storytellers cooked up "Hoshruba", they also stripped it of many characteristics of the legend. For example, in "Hoshruba" there is a greater reliance on human endeavour whereas in "The Adventures of Amir Hamza", divine help is solicited often and is frequently received.

What about current Urdu literature – is 'Hoshruba' still of interest to modern-day Urdu authors?

Farooqi: Unfortunately this is not the case at present. After its prominence in late nineteenth and early twentieth century, when Urdu's greatest poet Ghalib counted himself among one of its admirers, the dastan genre (an ornate form of oral history present in Central Asia) and the tale of "Hoshruba" was not critically studied or written about. No modern editions were published. In time the highly ornate language of these classical works also became inaccessible. 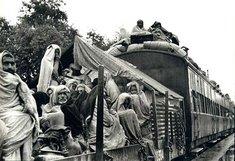 Identity mess: by encouraging a divide along linguistic lines the British broke the communal harmony in India, says Farooqi. Pictured: a refugee train on its way to Punjab, Pakistan

​​As a translator who spends a lot of time closely reading this text, I see many possibilities of literary exploitation of the narrative structure and components. The translation will allow foreign scholars of oral narratives, classics and linguistics to bring their critical apparatus to this text. But those who stand to benefit most from it are naturally those who write in Urdu. Urdu Project (www.urduproject.com) will soon publish a modern, edited version of the original "Hoshruba" text in the Urdu language.

Farooqi: The current body of translations from contemporary Urdu fiction is still relatively small. There are many works which need to be translated. A lot of contemporary Urdu fiction writers are regularly published in the Annual of Urdu Studies at www.urdustudies.com. But when we look at the classics of Urdu literature we find that very, very few translations of Urdu classics were made into English or any other language. It does not allow a comprehensive picture to emerge of how Urdu literature evolved and developed.

Musharraf Ali Farooqi's Story of a Widow (2008) was longlisted for the 2010 IMPAC-Dublin Literary Award. Farooqi's internationally acclaimed translation of The Adventures of Amir Hamza (2007) was the first complete translation of the major Urdu epic. His translation of Tilism-e-Hoshruba was published in June 2009. His company, Urdu Project is dedicated exclusively to publishing English translations of classical and contemporary works of Urdu literature.

The Adventures of Amir Hamza
The "Odyssey" of Mughal India
The "Hamzana" is considered the most significant oral epic of the Indo-Islamic world. The story narrates the fantastic exploits of Amir Hamza, the uncle of the Prophet Muhammad. Now a remarkable English translation by a Pakistani-Canadian author was published. Richard Marcus introduces the book