The 40th Cairo Book Fair
Competition between Center and Periphery

The Cairo Book Fair is still the biggest event of its kind in the Arab world. Though the Gulf States are barely represented in terms of literary works, major projects in the fields of translation and literature promotion are drawing attention. Mona Naggar reports

​​The United Arab Emirates, guest of honor at this year's Cairo Book Fair, was unable to include big literary names in its presentation. So far the young, wealthy country has left only a faint trace on the map of Arabic literature. To make up for it, the various exhibition halls of the Gulf Emirates' impressive, elaborately designed stands acquainted visitors not only with local traditions, but with ambitious cultural projects which various rulers have initiated in recent years.

The most recent example is the Kalima Project, intended to sponsor the annual translation of 100 classic and contemporary works into Arabic in cooperation with publishers. The first two translations were displayed in a showcase: "Kafka on the Shore", by Haruki Murakami and Umberto Eco's "Il Segno". The 2003 UN Report on Human Development in the Arab World pointed out the shockingly low number of translations into Arabic.

For Kalima's initiators, this was an important reason to become active in this field of cultural sponsorship. For its part, the Egyptian side presented the annual achievements of the National Center for Translation, which published the 100th title just in time for the Book Fair.

These translation programs are undoubtedly a positive phenomenon. One figure raises concerns, however: the print run of the National Center for Translation for the entire Arab-speaking world is only 3000 copies. This points to one of the biggest problems of the Arab book market: the lack of readership. The reasons for this are many: poorly-stocked public libraries, high illiteracy rates, low purchasing power and the excessive consumption of televisions and computer games.

However, Tarik Abdalbary, director of the Egyptian-German Cultural Center in Cairo, sees the catastrophic educational system as the main reason:

"Books are a despised element in the schools. They are poorly designed, filled with mistakes and lots of superfluous rhetoric. The students are supposed to learn everything by heart, something that people have never enjoyed. The information and the knowledge in the textbooks are forced upon children, they are not allowed to discuss. Any creativity gets lost. For that reason anything having to do with books is seen as dull and bothersome."

At the same time, popular mass culture is religiously-oriented. That was evident at the Book Fair as well. The best-attended event was a reading by the Saudi Arabian preacher Aid Algarne. Due to the huge crowd, many Egyptians had to listen to the words of the Salafite from Riad outside the auditorium in the rain.

No new stimuli or innovations in Cairo 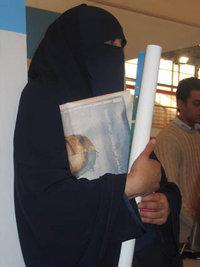 Trend of Islamization: at the Cairo Book Fair, the best-attended event was a reading by the Saudi Arabian preacher Aid Algarne

​​The presentation of the United Arab Emirates as guest of honor in large part demonstrated the competitive relationship between Cairo, the classic center of Arab culture, and the periphery. The small, wealthy countries on the Persian Gulf have long since ceased to regard themselves as developing countries in matters of culture.

The book fair on the Nile is still the largest in the Arab world, this year attracting nearly 700 Arab publishers, but it is hardly suited for creating new stimuli or serving as a platform for innovations.

In a counter-move, Abu Dhabi is attempting to establish itself as a book and publishing center in the Arab world. Thus, the three-day conference held in Cairo, at which Egyptian and international publishers discussed the license trade, could also be seen as an attempt not to idly leave the field open to Abu Dhabi.

However, the Egyptian columnist Sayyid Mahmud doubts that the Egyptian publishers' association and those responsible for the Book Fair will be able to compete with Abu Dhabi. He criticizes the fact that functionaries in influential positions are able to promote their interests anyway, and are hardly willing to work on effective mechanisms to benefit all the publishers.

The short list of the Arabic Booker Prize was announced during the Book Fair and provided a popular topic of conversation. The prize for the best Arabic novel, launched by the Emirates Foundation and the Booker Prize Foundation, will be awarded for the first time this year. The initiators' stated goal is to draw international attention to contemporary Arabic literature.

Headed by the Iraqi writer Samuel Shimon, the jury made a surprising selection. The top six candidates included no prominent names, but many new discoveries. Such as the novel by the young Syrian writer Khalid Khalifa, who explores the leaden epoch of the 1980s in Syria in "In Praise of Hatred". Or Makkawi Said, unknown outside of Egypt: in "Swan Song" he tackles the illusions of his generation of left-wing intellectuals.

The author with the greatest chance of winning the main prize in March is probably the Egyptian Baha Tahir, born in 1935. His "Sunset Oasis" is a gripping historical novel set in the oasis of Siwa at the end of the 19th century. The fact that two Egyptian authors have made it into the final round of the Arabic Booker Prize may well reconcile many Egyptians with the potent cultural sponsors from the Gulf.

Cultural Politics in the Emirate of Abu Dhabi
Frighteningly Giant Leaps
The new concept of the Abu Dhabi Book Fair is only a part of the new cultural policy in the emirate of Abu Dhabi. Mona Naggar examines the high-flying cultural ambitions of the UAE's richest emirate

Cairo Book Fair 2007
Trying for an International Image
The Arab world's largest book fair, which closed on 4 February, was offering books to the public at reduced prices. This year the featured country was Italy. Mona Naggar reports

The Cairo International Book Fair 2006
Censorship Is a Topic of Conversation
This year the Arab world's biggest book fair has a major change in store: Cairo will feature a guest of honor. The first guest of honor will be Germany. Mona Naggar reports from Cairo

END_OF_DOCUMENT_TOKEN_TO_BE_REPLACED
Social media
and networks
Subscribe to our
newsletter