Skip to main content
The Adventures of Amir Hamza

The "Odyssey" of Mughal India

The "Hamzana" is considered the most significant epic of the Indo-Islamic world. The story narrates the fantastic exploits of Amir Hamza, the uncle of the Prophet Muhammad. Now a remarkable English translation by a Pakistani-Canadian author was published. Richard Marcus introduces the book

The "Hamzana" is considered the most significant oral epic of the Indo-Islamic world. The story narrates the fantastic exploits of Amir Hamza, the uncle of the Prophet Muhammad. Now a remarkable English translation by a Pakistani-Canadian author was published. Richard Marcus introduces the book 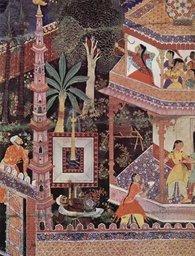 Fusion of Persian and Indian styles: Manuscript of the Hamzanama, Akbar period, 16th century, from the Collection Maria Sarre-Humann

​​ The Adventures of Amir Hamza, or the Hamzanama, is considered one of the great works of classical Urdu literature. The English translation I read was recently done by Pakistani-born Canadian writer Musharraf Ali Farooqi, who used the text first compiled by Ghalib Lakhnavi in 1855 and then expanded upon in 1871 by Abdullah Bilgrami as his source.

Although this version was written in the language of the Mughal Empire, the Muslim Empire that ruled over an area that stretched from what's now present-day Pakistan to as far south as Calcutta, the story predates the empire by a few hundred years. For while the Mughal empire was at its zenith of cultural enlightenment and achievement from the mid 15th century to the mid 17th century, it is claimed that versions of The Adventures Of Amir Hamza have been told since as early as the seventh century CE.

In his notes on the history of the text included with the translation, Farooqi tells how it's been thought that the story was originally composed in honour of the Prophet Muhammad's uncle Hamza Bin Abdul Muttalib who died in defence of the city of Mecca. However, another tradition claims that it's based on the exploits of an early ninth century Persian adventurer named Hamza Bin Abdullah.

What we do know for certain is that the style of work in question was known as a dastan, a type of oral adventure story. Over the years various episodes and adventures have been added as new people have taken up the tale. Interestingly enough even when the story was first written down, the manuscripts still served as a reference point from which story tellers would draw their inspiration.

A new language for a new empire 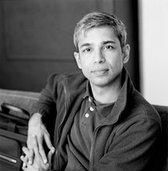 From Hyderabad, Pakistan, to Toronto, Canada: Musharraf Ali Farooqi, author, novelist and translator of the Hamzana

​​ While Ghalib Lakhnavi attributes his inspiration to a version originally composed during the reign of Mahud of Ghazna, who ruled an area comprised of modern Afghanistan, Iran, and Northern India from 971-1030 CE, the story itself probably only came to India with the establishment of the Mogul Empire. For it was in the 1600's that Urdu became the official language of the Empire, uniting the three dominant cultures of the region in one script. For although the vocabulary is Persian, the script used is Arabic, and the grammatical structure is Hindu.

Due to the nature of dastans, where each dastan-gos (dastan narrator) amends the story by either elaborating on existing stories or incorporating new adventures into the narrative, the story of Amir Hamza continued to evolve as long as there were dastan-gos.

Unlike most other oral traditions this one survived into the twentieth century, with the last of the dastan-gos Mir Baqi Ali dying in 1928. This means that there is no such thing as a definitive text when you're talking about The Adventures of Amir Hamza, although the version translated by Musharraf Ali Farooqi can be considered one of the latest and stands a good chance of incorporating the majority of the story.

Unlike adaptations that have been done of other classic epics (Ashok Banker's Ramayana for instance) what Farooqi offers us is a direct translation from the Urdu into English with no concessions to modernity. Therefore your experience reading the text comes as close as possible to being the same as if it were still in the original Urdu. All the flamboyance and extravagance of language that coloured the original narrative remains, and although accustoming yourself to it might take a while, you'll eventually find yourself enjoying the exclamatory flourishes and elaborate sentences.

​​ The Adventures of Amir Hamza begins before the central character is born, describing events that occur that will help shape his destiny. We also learn valuable information as to the various factions within the kingdom and how even before his conception there are those who are destined to be his enemies. Of course once he's born the action really picks up. At the age of five he's already having adventures that would put grown men to shame.

As Hamza ages his exploits continue to grow and his reputation expands as he fulfils the destiny foretold before he was born of rescuing the Emperor's throne and crown from the clutches of a notorious outlaw while still a teenager.

Amar, a teacher of humility

One of my favourite characters in the story isn't Hamza, but one of his boon companions, Amar bil Fatah. Amar is a great thief and trickster who delights in the discomfort of others. As an infant he contrived to steal the milk from the breasts of the wet nurse who was caring for him, Hamza, and another baby so that he grew plump while the other two stayed small. At first his trickery is indiscriminate and mean-spirited so that only through the friendship of Hamza is he saved from being exiled or cast aside. While he never loses his taste for stealing and trickery, as an adult he puts his talents to good use to take revenge upon those who would discredit or harm his dearest friend and patron, Hamza.

Not only does Amar provide comic relief from the seriousness of other events, he is also, like other trickster characters throughout history, a teacher of humility. He takes especial delight in deflating those, even his closest friends, who have let pride puff them up beyond their worth. He is a constant reminder to all the characters and the reader of what happens to you when you think too highly of yourself.

The Adventures of Amir Hamza is not only interesting to read because of its subject matter, it's a lot of fun. It contains all the adventure and excitement of some of the best of sword and sorcery stories while supplying an introduction to the legends and mythical heroes of a culture few know little or anything about. Musharraf Ali Farooqi's translation does an excellent job of recreating the sounds of the Urdu text thus allowing it to retain much of its original flavour.

Against the backdrop of global conflict, the war on terror and the threat of militant Islamism, the Hamzana – a tale that has evolved over centuries and empires and that so congenially blends different epochs and cultures – is a splendid reminder of the variety and mutability of Islamic culture.

Richard Marcus has published over 1300 articles. He currently edits Epic India Magazine, an online arts and culture magazine focusing on South East Asia in general and India specifically, is a contributing editor at the pop culture site Blogcritics.org and the mind behind the iconoclastic site Leap In The Dark. His work has appeared in such diverse places as the German edition of Rolling Stone Magazine and The Bangladesh Star.

From Lemberg to Pakistan
The Yiddish Jokes of Mohammad Asad
Leopold Weiss, the grandson of a rabbi, later also known as Muhammad Asad, became ideologically involved in the founding of the new state of Pakistan. Weiss also translated the Koran into English. A portrait by Joseph Hanimann

END_OF_DOCUMENT_TOKEN_TO_BE_REPLACED
Social media
and networks
Subscribe to our
newsletter