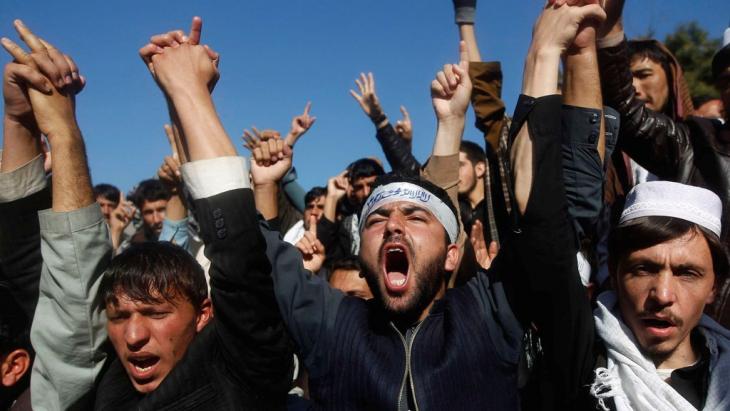 Afghanistan's neighbours must not play power politics within the country, in the hope of gaining some slight advantage over one another. That path leads only to chaos, from which no country benefits. By Jaswant Singh, former long-time serving minister in India

Despite some last-minute brinkmanship by Afghan President Hamid Karzai, the United States and Afghanistan seem to have worked out a security agreement to govern the 8,000-10,000 troops that will remain in Afghanistan from next year. But Afghanistan remains a source of significant uncertainty – and high anxiety – in an already unstable region.

Although the Afghan army has performed surprisingly well this year as it has prepared to assume full responsibility for the country's security, governments in the region remain deeply skeptical of its ability to resist a resurgent Taliban without the strong support that the US has provided. But the Americans are intent on withdrawal, and no other country is willing to assume the responsibilities that they are relinquishing.

In this context, the fear that Afghanistan will unravel once again risks becoming a self-fulfilling prophecy. In fact, a closer look at various key governments' approaches to Afghanistan reveals that only the US is maintaining a coherent stance.

Pakistani policy is practically at war with itself. Since the Soviet invasion of Afghanistan in 1979, Pakistan has viewed the country as a source of "strategic depth" in its decades-old enmity with India. 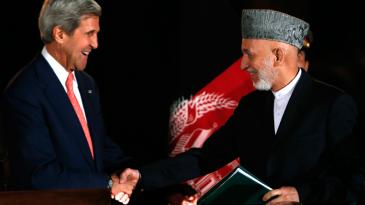 "A closer look at various key governments' approaches to Afghanistan reveals that only the US is maintaining a coherent stance." - Afghanistan's President Karzai and US Secretary of State Kerry in Kabul after announcing the results of the bilateral security agreement

As a result, it has been playing both sides of the US-Taliban conflict, permitting US drone strikes against Afghan Taliban leaders hiding in its western provinces but making little effort to confront the Taliban on the ground. This way, the logic went, Pakistan could retain enough influence with the Taliban to secure leverage over Afghanistan's government.

But it is the Taliban that ultimately gained strategic depth in its Pakistan-based guerrilla war with Afghanistan – a war that has become a serious threat to Pakistan's security. The Pakistani Taliban has killed hundreds of Pakistani soldiers this year. And Prime Minister Nawaz Sharif's new strategy – to seek a non-interference agreement with the Pakistani Taliban – will probably lead to even more domestic insecurity.

Meanwhile, India has been attempting to counter-balance Pakistan's influence with the Taliban by providing investment, military training, aid, and other support to the Afghan government. But this amounts to betting all of its chips on one hand, the Afghan government – an especially risky strategy in such a volatile environment.

China's Afghan policy also has its pitfalls. The People's Republic has invested billions of dollars in Afghanistan, including a $3 billion payment for rights to mine copper at Mes Aynak. Although the Chinese have offered rhetorical support for international forces' anti-terror efforts in Afghanistan, they have refused even the smallest military role. And they have provided only about $250 million in aid over the last decade – a paltry sum, given the potential consequences of Afghan instability for China's $6 trillion economy. 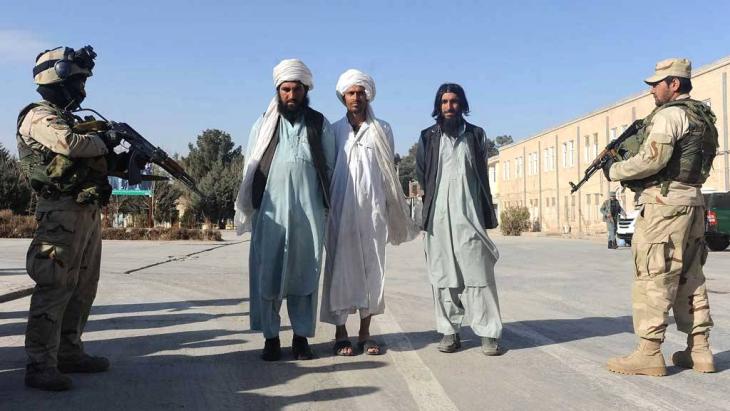 Afghan security forces guard captured Taliban fighters as they are presented to the media in Herat on January 24, 2013. Afghan police and other security forces are increasingly targets of Taliban attacks as they take a bigger role in the battle against the insurgents before NATO withdraws the bulk of its 100,000 combat troops by the end of 2014

To be sure, China claims to be upholding its doctrine of non-interference in other countries' domestic affairs. But, with the Afghan government asking the entire international community for assistance, Chinese aid would not violate this principle. Moreover, China's hands-off policy could end up jeopardizing its investments in Afghanistan – not to mention the security threat that would arise were a re-empowered Taliban to provide aid or sanctuary to the increasingly Islamist Uighur separatists in China's Xinjiang region.

Iran's discreet assistance for the US

Iran's Afghan policy has been reflexively anti-American for much of the last decade. But back in 2001, Iran's government, led by reformist President Mohammad Khatami, essentially consented to the US invasion of Afghanistan, even providing discreet assistance. Iran was scrupulous in closing its border to the Taliban – and about detaining Taliban and Al-Qaeda figures who sought refuge. Indeed, it was Iran that first suggested that Karzai lead the newly formed Afghan government, and Khatami's government pledged $560 million in assistance over five years at the first donor conference for Afghanistan in early 2002.

But US President George W. Bush's notorious "axis of evil" speech – delivered just days later, and citing Iran as one of America's three most dangerous enemies – spurred a reversal of Iranian policy. Khatami's successor, Mahmoud Ahmadinejad, repeatedly condemned the presence of US and NATO forces in Afghanistan, and even worked to obstruct their efforts. 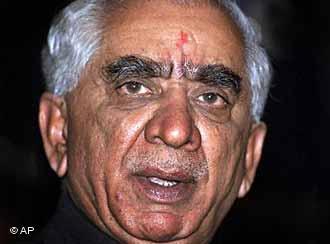 Jaswant Singh: "One hopes that the recent agreement concerning Iran's nuclear program portends a return to a more flexible Iranian policy toward Afghanistan – essential if there is to be a regional solution to Afghanistan's problems."

One hopes that the recent agreement concerning Iran's nuclear program portends a return to a more flexible Iranian policy toward Afghanistan – essential if there is to be a regional solution to Afghanistan's problems. Given America's looming departure, such a solution is becoming increasingly urgent.

But reaching a regional consensus will not be easy, given the disparate nature and interests of the regimes involved. Iran, China, Tajikistan, and Uzbekistan are all dictatorships – one religious, one market-communist, and two personal. India is a democracy, and Pakistan a wayward democracy. Nearby Russia is increasingly a one-man-show under President Vladimir Putin, who seems intent on refighting the Cold War with the US, rather than constructing viable strategic relationships that reflect Russia's diminished reality.

Nonetheless, all of these countries (perhaps with the admittedly large exception of Pakistan) can agree on certain core objectives. First, Afghanistan must not become a safe haven for terrorists. Mullah Mohammed Omar – the Taliban's leader, who is reportedly in hiding in Pakistan – must understand that if the Taliban uses any formal political influence it gains in Afghanistan to support terrorist activities, it will face united regional opposition.

Second, given their limited leverage, Afghanistan's neighbours must lean hard on countries that can influence any future Afghan government. The Gulf states, for example, have the means to invest in building an Afghanistan that provides real opportunities to all citizens – particularly the young men whose lack of options so often drives them into the arms of terrorist recruiters. Realistically, however, the potential for achieving such an outcome is limited.

Most important, Afghanistan's neighbours must not play power politics within the country, in the hope of gaining some slight advantage over one another. That path, as we have seen, leads only to chaos, from which no country benefits.

Jaswant Singh is the only person to have served as India's finance minister (1996, 2002–2004), foreign minister (1998–2004), and defence minister (2000–2001). While in office, he launched the first free-trade agreement (with Sri Lanka) in South Asia’s history, initiated India’s most daring diplomatic opening to Pakistan, revitalized relations with the US, and reoriented the Indian military, abandoning its Soviet-inspired doctrines and weaponry for close ties with the West. His most recent book is Jinnah: India – Partition – Independence.

In his book "Ground Zero: 9/11 und die Geburt der Gegenwart" (Ground Zero: 9/11 and the Birth of the Present) Islamic scholar Stefan Weidner analyses the consequences of the ... END_OF_DOCUMENT_TOKEN_TO_BE_REPLACED

To Afghans, the name "Panjshir" evokes associations with the Tajik resistance against the Soviets during the 1980s. But the special charm of the province lies in its landscape. ... END_OF_DOCUMENT_TOKEN_TO_BE_REPLACED

The USA and NATO plan to withdraw from Afghanistan by September. The operation is risky, the outcome uncertain. Many Afghans fear civil war. The quake on the Hindu Kush will also ... END_OF_DOCUMENT_TOKEN_TO_BE_REPLACED

Even in times of war and pandemic, refugees are still being deported to Afghanistan. Several deportation flights have taken place in recent weeks alone. Since those affected often ... END_OF_DOCUMENT_TOKEN_TO_BE_REPLACED

The Prophet Muhammad never executed anyone for apostasy, nor encouraged his followers to do so. Nor is criminalising sacrilege based on Islam’s main sacred text, the Koran. In ... END_OF_DOCUMENT_TOKEN_TO_BE_REPLACED
Author:
Jaswant Singh
Date:
Mail:
Send via mail

END_OF_DOCUMENT_TOKEN_TO_BE_REPLACED
Social media
and networks
Subscribe to our
newsletter