An extensive collection of Islamic artwork is making its way around the globe. Its organizers hope that it will arouse an interest in Islamic culture and foster understanding between Muslims and the western world. Silke Bartlick reports 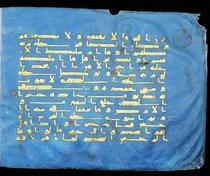 One of finest examples of Quranic productions, the Blue Quran is written on blue parchment in gold kufic script: folio from the Blue Quran — North Africa, possibly Qayrawan, 9 – 10th century

​​ His Royal Highness Aga Khan IV – the spiritual leader of the Shia Imami Ismaili Muslims – owns one of the world's largest and most precious collections of Islamic art. From 2013, it will be housed in the new Aga Khan museum in Toronto, but until then the collection is making its way around the world. Through June 6, the artwork can be viewed at the Martin-Gropius-Bau exhibition hall in Berlin.

The collection includes over 1,000 valuable works of Islamic art from a period spanning a millennium. Some 200 pieces were carefully chosen to show in Berlin, said Luis Monreal, director of the Aga Khan Trust for Culture.

Cultures manifest themselves in art

First of all, they were chosen "to present some of the fundaments of Islam: the value of the written word, the Quran, and the importance of the pilgrimage to Mecca," explained Monreal, "and secondly – and for me most importantly – to present to our western public the pluralism of the Islamic cultures." 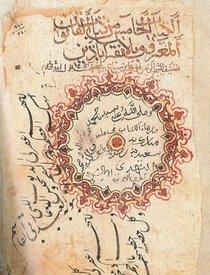 Used as a text-book in the universities of Montpellier and Louvain as late as 1650: "The Canon of Medicine" manuscript by Avicenna

​​ Indeed, in the exhibition manual, Aga Khan IV writes that the alarming and dangerous tensions between the Muslim world and the West make it necessary for both sides to make an effort to get to know each other better. He says that a museum makes this possible in an imaginative and intelligent way. After all, cultures manifest and express themselves in art.

Focus on the Quran

The exhibition makes it clear that the Quran is the guiding light for the Muslim way of life. To transcribe all of it or a part of it is considered a pious task – one that inspired people to create imaginative artwork over the centuries.

In this way, richly-illustrated scripts came into existence, as well as painted tiles, inscriptions in stone, portable miniature guides to Quran manuscripts, and delicately engraved mother of pearl shells and chestnut leaves. Many of these things have survived to this day. 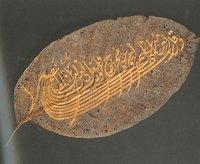 ​​ "Apart from the material on the Quran, we grouped the rest of the elements to show the routes of travellers through the Islamic world – travels which were sometimes Hajj pilgrimages, but also adventures and discovery expeditions," said Benoit Junod, the exhibition's curator.

The exhibition also depicts the travels of traders, from one Islamic dynasty to the next, and from Cordoba on the Iberian Peninsula to Morocco and Tunisia, to Egypt and Syria, to Constantinople and Baghdad, Delhi and Turkmenistan. Each of these regions had its own traditions and values that manifested themselves in the works of their artists.

Every object at the exhibition bears a unique history – such as, for example, "The Canon of Medicine" manuscript by Avicenna, a Persian physician, philosopher and scientist.

"This manuscript had an influence on Europe that we can't properly measure today," said Gereon Sievernich, director of the Martin-Gropius-Bau. "But it can't be overestimated because, translated into Latin, it was the handbook for European doctors for around 500 years."

According to Junod, the exhibition's organizers hope that western visitors return home with a feeling of curiosity about Islam and the development of its civilization. Junod himself hopes that many German Muslims also visit the exhibition and feel proud of their heritage.

Interview with Karim Aga Khan
"In Islamic Architecture You Can Often Sense a Spirituality"
He is the hereditary imam of Shiite Ismaili Muslims – and known for his development network and wealth. But Karim Aga Khan is also well-versed in architecture. Philip Jodidio spoke with him

Afghanistan's Bactrian Gold
An Ancient Heritage of Diversity
A current exhibition in Amsterdam is showing visitors a very different, unfamiliar image of Afghanistan. The 250 archaeological objects on display shine a light on the former glory of Afghanistan's ancient ruling dynasties. Nasim Saber reports

END_OF_DOCUMENT_TOKEN_TO_BE_REPLACED
Social media
and networks
Subscribe to our
newsletter