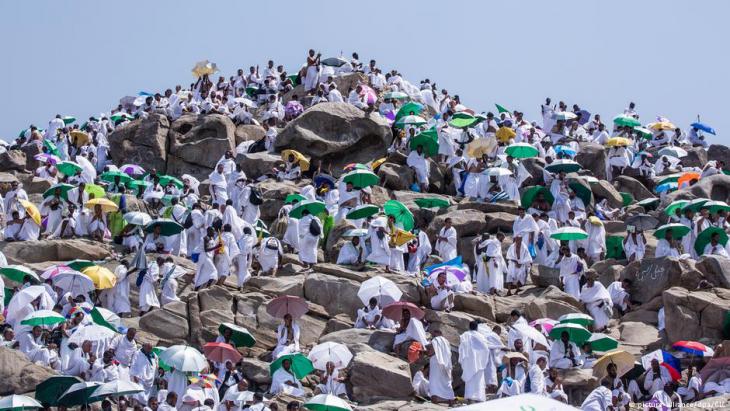 Millions of believers, heat and loud prayers: the hajj in Mecca. Once a year, the Saudi city becomes a pilgrimage hot spot and the site of the largest gathering of people in the world. Nermin Ismail was in Mecca

It is sweltering on Mount Arafat: 48 degrees Celsius (118 Fahrenheit). This year the Muslim pilgrimage falls at the height of summer. On the way to the epicentre of the hajj – a good 25 kilometres southeast of Islam's holiest city Mecca – young Saudi soldiers spray pilgrims with water to cool off. Volunteers distribute drinks, and older people, women and children are always given preferential treatment. I try to pass my bottle to let others have a drink as well, but the woman next to me, from India, refuses. She points to her large, gold-coloured water bottle.

Many have come with water, prepared for the long trek under the blazing sun. From time to time, though, you find yourself gasping for breath in this massive crowd. Time and again, I try to get more air by lifting my head up. Believers from all over the world have come for this journey. Some pilgrims have been saving their entire lives to be able to fulfil this religious duty.

At night, they sleep on the warm ground, covering themselves with their thin, colourful prayer mats. For sustenance, they rely on the Saudi food bank workers, who regularly distribute small portions of rice and meat to pilgrims on the road. On the "Day of Arafah" the concentration of pilgrims reaches is highest. Because of the fixed date of the pilgrimage – the second day of the hajj – all of the pilgrims gather together at one site at the same time. This year around 2.7 million made their way to Mecca. At the other sites, they can come on different days so the swells get staggered. 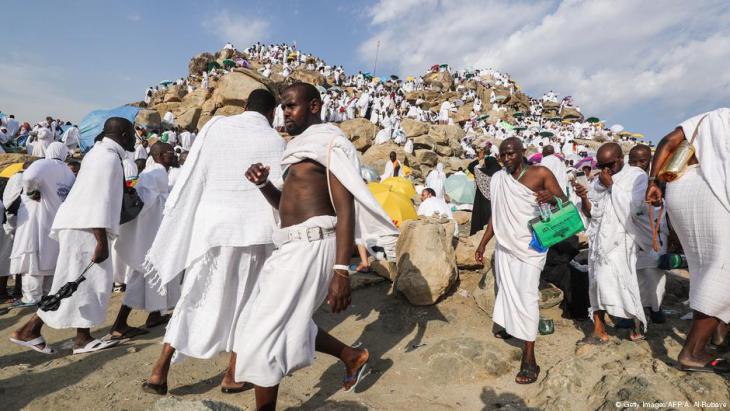 A predictable crush: on the "Day of Arafah" the concentration of pilgrims reaches its highest. Because of the fixed date of the pilgrimage on the second day of the hajj, all of the pilgrims – this year, some 2.7 million – all gather together simultaneously at the one site

Hoping for forgiveness on the 'Day of Arafah'

A visit to Jabal al-Rahma, the "Mountain of Mercy" near Mecca, is an obligatory step in satisfying the religious requirements of the hajj. According to legend, the site at the foot of the mountain is called "Arafah" meaning "to be acquainted with". This is where Adam and Eve are said to have met each other again after being driven out of paradise. This is also where the Prophet Muhammad is believed to have made his final address to his Muslim followers. In this farewell sermon, he spoke about equality, women's rights and the hajj.

Since Ali Khamenei, Iran's most powerful man, has openly and unconditionally come out in support of Putin's war in Ukraine, logistical help is on its way, with an allegedly ... END_OF_DOCUMENT_TOKEN_TO_BE_REPLACED

Tourists have been returning to Tunisia, Egypt and Morocco. But, given the global uncertainty caused by the Ukraine war, will the comeback be enough to save a struggling sector, ... END_OF_DOCUMENT_TOKEN_TO_BE_REPLACED

The highly controversial Indian blockbuster "The Kashmir Files“, on the exodus of Kashmiri Hindus in the 1990s, is characterised by unilateral representations, negative ... END_OF_DOCUMENT_TOKEN_TO_BE_REPLACED

"Flugt" is the world's first museum dedicated to the stories of those forced to flee. The new museum, which focuses on the fates of refugees then and now, is housed in a former ... END_OF_DOCUMENT_TOKEN_TO_BE_REPLACED
Author:
Nermin Ismail
Date:
Mail:
Send via mail

END_OF_DOCUMENT_TOKEN_TO_BE_REPLACED
Social media
and networks
Subscribe to our
newsletter