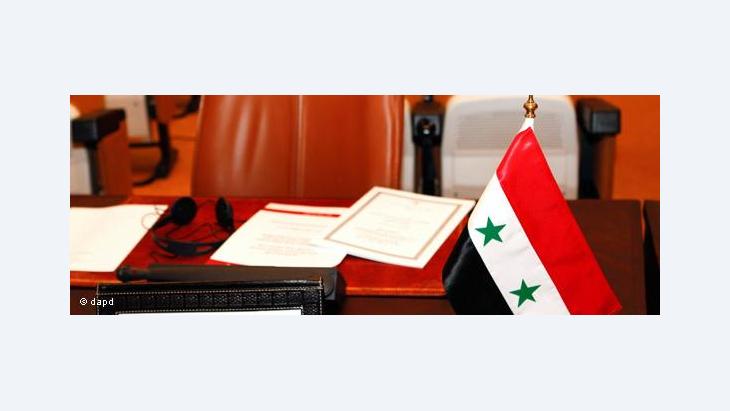 The Arab League and the Conflict in Syria

The Unexpected Renaissance of the Arab League

The Arab League is taking a remarkably firm line towards the regime of Bashar al-Assad in Syria, which is setting its face against reform. Loay Mudhoon argues that this is a reaction to the revolutionary events and the regional shifts in power in the Arab world

For decades, the Arab League has been seen as powerless, a federation of states with a worn-out organisation and without recognisable structures or political significance. It was an Arab paper tiger, something to laugh at on the international stage.

For many in the Arab world as well as for democracy activists, the League seemed to typify the "Arab sickness", a symptom of the malaise that was otherwise evident in the inertia that prevailed in the region's politics and the powerlessness of the people on the street. But the historic revolutionary events of the Arab Spring seem to have freed the institution from its self-imposed passivity and immaturity.

Libya intervention was the turning point

The unexpected new commitment on the part of the Arab League began in March during the Libya conflict, when, for the first time in its 66-year history, it approved an outside intervention in the affairs of one of its members. 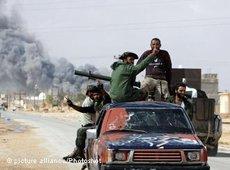 From paper tiger to active regional player with a strong voice: for the first time in its 66-year history, the Arab League approved an outside intervention in the affairs of one of its members during the Libya conflict

​​In demanding a no-fly zone over Libya, it gave legitimacy to the NATO operation in the eyes of the Arab world and, in the process, abandoned the principle of non-involvement in the internal affairs of other Arab states. The change was remarkable: it was due primarily to the regional shifts in power brought about by the wave of revolutions, but also to the fact that the Arab people had once more become a power factor on the political stage.

Now, in the post-revolutionary Arab world, the possibility that public opinion might again cease to be part of the political decision-making process is no longer imaginable and has not been so ever since the overthrow of Ben Ali in Tunisia and Mubarak in Egypt, and since the Qatari news station Al Jazeera became a mouthpiece for the Arab revolution. It was only when it came to Bahrain that Al Jazeera made an exception, dismissing the uprising there as "riots with a religious background".

Spectacularly decisive towards the Assad regime

As far as the Gaddafi regime in Libya was concerned, it was hated by most of the league's members and found itself largely isolated in the region. But Syria is a different case. Both historically and culturally, it is part of the Arab core and one of the cradles of Arab nationalism. The Assad regime has always known how to put itself over to the people as a defender of Arab interests against the hegemony of the West. Syria also had strategic alliances with Iran and the Lebanese Hezbollah – both powerful allies in the region.

It's against this background that one must judge the decision of the Arab League to exclude Syria as long as it fails to comply with the league's mediation plan. The move has an entirely different quality to the move against Libya.

Qatar and Saudi Arabia are the driving forces 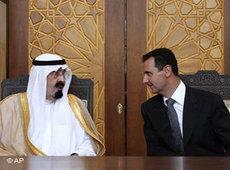 According to Loay Mudhoon, Saudi Arabia is one of the driving forces behind the Arab League's new found energy; in isolating Syria, a close ally of Iran, Saudi Arabia hopes to reduce Iran's influence in the region

​​But this unusual commitment by the league has little to do with enthusiasm for democracy in the countries that currently hold the most influence in the organisation, nor is it driven by support for the Syrian opposition. After all, almost all the members of the league have no qualms about suppressing peaceful protests and rejecting basic democratic reforms in their own countries. Indeed, it was Saudi Arabia and the United Arab Emirates that sent troops to Bahrain in mid-March to help the government there put down the uprising against the rule of the Sunni royal house.

It's rather that the rich petro-monarchies, Saudi Arabia and Qatar, want to exploit the opportunities presented to them by the uprisings. The ruling family in Doha wants to turn its mini-emirate into a regional power and is making clever use of both chequebook diplomacy and Al Jazeera, which it deploys as an instrument of soft power.

The strategists in Riyadh, on the other hand, see this as a historic opportunity: the overthrow of Saddam Hussein in Iraq led to an increase in Iran's influence; the fall of Iran's ally, Bashar al-Assad in Syria, could well see Tehran's power in the region decrease again. Those in power around King Abdullah are firmly convinced that a post-Assad Syria would be dominated by Sunni powers who would feel closer to the "Sunni heartland of Islam" in Saudi Arabia than to the Shia theocracy in Iran. Furthermore, the Shia Hezbollah in Lebanon, which is Iran's Trojan horse in the Arab world, would be a more manageable entity without the Assad regime. This line is reinforced by the fact that the Hamas movement, which is a Palestinian branch of the Sunni Muslim Brotherhood in Egypt, has refused to support the brutal repression of the anti-Assad protests.

But it is not just the Arab Gulf monarchies' obvious fear of Iranian domination that has led the Arab League to its new interventionist policy; it is also the current weakness of the West. For the first time since the Second World War, the West is playing no real role in defining relationships in the Middle East. That should confirm the Arab League in its new course.

Home
Print
Newsletter
More on this topic
Uprising against the Assad Regime in Syria: What Support for the Protest Movement?No-fly Zone over Libya: An International Legal DilemmaThe Arabs and the Libyan Intervention: Don't Steal Our Revolution!
Related Topics
Arab Spring, Arabellion, Democracy and civil society, Syrian Civil War
All Topics

Education is the key to the future. Muzoon Almellehan has known this since she was 14 years old. But she lives in a Jordanian refugee camp. And since then she has been fighting ... END_OF_DOCUMENT_TOKEN_TO_BE_REPLACED

The Kurdish YPG militia did the heavy lifting in the fight against the "Islamic State", yet many foreign YPG adherents, including Germans, have come home to find themselves under ... END_OF_DOCUMENT_TOKEN_TO_BE_REPLACED

The terror attacks in Paris, Brussels and Berlin were all carried out by men radicalised in jail. In Germany, politics and the judiciary are trying out new approaches to prevent ... END_OF_DOCUMENT_TOKEN_TO_BE_REPLACED

The assassination of the Iranian general Qassem Soleimani in a surprise U.S. drone strike is being used by the Islamic Republic of Iran to political ends, says Iranian journalist ... END_OF_DOCUMENT_TOKEN_TO_BE_REPLACED

With "Assad or We Burn the Country", Sam Dagher has furnished the world with some genuine ammunition against the Syrian regime's on-going campaign of disinformation. The only ... END_OF_DOCUMENT_TOKEN_TO_BE_REPLACED

There are only a few thousand Aramaic Christians left in south eastern Anatolia. And they are intent on preserving their ancient culture dating back one-and-a-half millennia. ... END_OF_DOCUMENT_TOKEN_TO_BE_REPLACED
Author:
Loay Mudhoon
Date:
Mail:
Send via mail