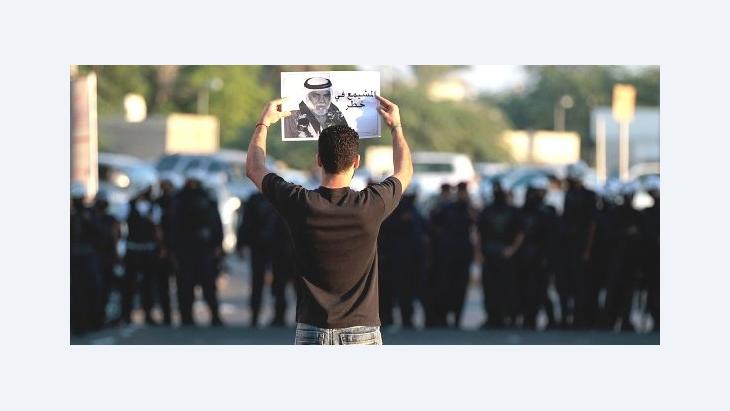 The Arab Spring and the Media
Distorted Images

﻿Why have Al-Jazeera, Al-Arabiya and most western media neglected to report on the uprisings in Bahrain? Is it true that in Syria, Alawites are fighting against Sunni Muslims? And who were the real victims of the Houla massacre? Amira Mohsen Galal takes a look at some of the most striking flaws in reporting on the Arab Spring, two years after the uprisings began

﻿There has been much criticism of western mainstream media coverage of the Syrian conflict. For the most part, reports have been very simplistic. The commonly touted messages of the main players have largely been reflected with clear-cut, Hollywood style 'good' and 'bad' guys. The basic storyline being: "The dictatorial Syrian government is torturing and killing unarmed protestors and civilians, including women and children and the West and the Arab League are making attempts to protect these civilians."

While it is undeniably true that innocent civilians are paying the ultimate price in their quest for freedom, and many are being killed by government forces, inevitably this is not the whole picture.

Numerous commentators have written about the lack of objective reporting on the horrifying events taking place in Syria. Known as the 'Angry Arab' columnist, As'ad Abu Khalil has written a number of criticisms of western media coverage, whilst Emirati commentator Sultan al-Qassemi recently published a particularly scathing piece for Foreign Policy magazine on Al-Jazeera and Al-Arabiya's biased coverage of events.

However, it would be naïve to believe that Syria has been singled out in this respect. Media coverage of the Arab Spring and its aftermath, as a whole, has been very poor. A few common flaws stand out. 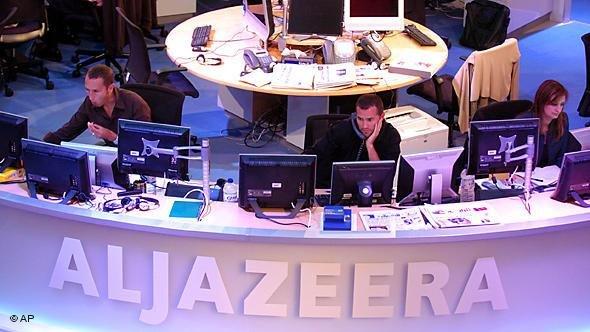 Despite a clear code of ethics, Al Jazeera has patently abandoned the basic standards of journalism, failing to run even the most basic of fact checks, Amira Mohsen Galal writes

​​Despite a clear code of ethics, prominently displayed on the Al-Jazeera website, the channel has patently abandoned the basic standards of journalism, failing to run even the most basic of fact checks. Both the Arabic and English channels have overwhelmingly relied on reports from anonymous callers and unverified video footage.

These, in turn, have been run on high profile channels across the world, including the BBC, which also claims a strong ethical mandate. Syria has not been unique in this respect. In fact the trend of relying on activist videos and anonymous calls was first used by CNN's iReport when covering Iran's 2009 'Green' Revolution.

In an interview with Qantara.de, Dr Thomas Pierret, a lecturer at the University of Edinburgh, points to the fact that "the most violent aspects of the (Egyptian) revolution were not reported … in particular, the torching of police stations and killing of many policemen in Alexandria on January 29."

Pierret also points to an exaggeration of the numbers that turned out for protests in Egypt. "Figures for the numbers of demonstrators on Tahrir Square were absurdly exaggerated, you simply can't put a million people in Tahrir Square, probably not even half of that – it's a small place. At times the camera that was filming the square from the top of one of the surrounding buildings was closing up on the crowd so as to conceal the fact that the square was half-empty."

Another issue that has been overstated are the tribal and sectarian differences present in many Arab countries. This has been the case in Syria where the conflict has often been simplified into a clash between the 'Alawite dominated government and Shabiha militias' and the predominantly Sunni protesters. Brooke Anderson, a journalist based in Beirut, told qantara.de that the problem lies in overemphasising references to Alawite, Christian or Sunni neighbourhoods.

"I understand that it's sometimes necessary to bring up people's religious and ethnic backgrounds, to give context to a story – but not all the time! Such coverage makes it look like brave or fundamentalist Sunnis are fighting against the Alawite bogeymen, and meanwhile Christians are apathetic – which is unfair to all of them." The fact of the matter is that many Alawites are anti-Assad just as many Sunnis are pro. 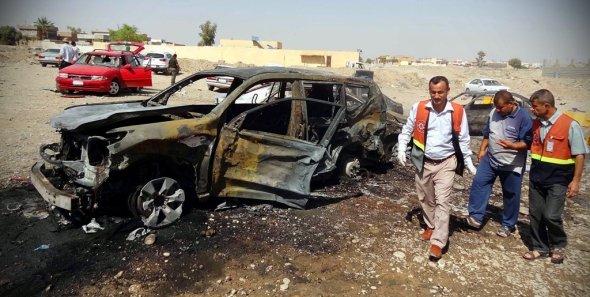 Overemphasising the role of sectarianism: in the Iraqi conflict, it is not Shiites and Sunnis targeting one another but violent Jihadis targeting both, Amira Mohsen Galal argues. Pictured: a car bomb attack in Kirkuk, 7 September 2012

​​Again, this issue is not unique to Syria's conflict but has been repeated in media coverage which has emphasised tribalism in Libya and sectarianism in Iraq. In his 'Comment is Free' article in the Guardian, Hayder al-Khoei maintains that the role of sectarianism has been overemphasised in the Iraqi conflict and that "political competition, rather than sectarianism, dominates Iraqi politics". It is not Shiites and Sunnis targeting one another but violent Jihadis targeting both.

The importance of follow-up coverage

Brooke Anderson goes on to identify an additional flaw in international media coverage of the Arab Spring. She says that little effort has been made in the follow-up to major stories, including the 'success' stories in Yemen, Tunisia and Libya. Follow-up coverage is important in order to be able to check whether newly appointed leaders have kept their promises and if the country is underway in rebuilding itself.

The lack of analytical countervailing within reports or discussion programs has been a systemic problem in the coverage of the Arab Spring and its aftermath, without exception. There has been a marked absence of pro-regime speakers across all the media outlets.

And whilst many activists and observers have welcomed this as a response to biased state-run TV channels –which even blacklisted certain members of the opposition from being mentioned in their broadcasts – this is not acceptable from professional media outlets.

Many news outlets have been guilty of reporting on events before the information is clear. This was most famously true of the Houla massacre, which was quickly reported as another regime offensive against innocent civilians. It later turned out that the situation was not quite as clear and that many news outlets, including the BBC, had relied on sources that were not checked beforehand and later turned out to have been manipulated.

BBC World News Editor, Jon Williams, issued an apology for the report, concluding that: "A healthy scepticism is one of the essential qualities of any journalist – never more so than in reporting conflict. The stakes are high – all may not always be as it seems." 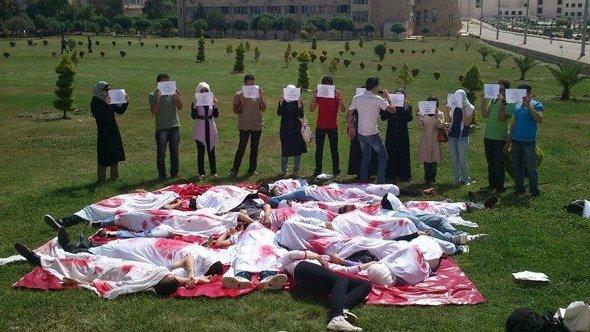 The Houla massacre took place on 25 May 2012. According to the UN, 108 people were killed, including 34 women and 49 children. On 1 June, the UN Human Rights Council voted to condemn Syria for the massacre in the town of Houla and called for an international criminal inquiry into the events. Later, on 27 June, the council published a report on rights violations in Syria where it tempered its previous position on the culpability of the Syrian government in the attacks

​​Several media outlets have ignored other very important regional developments in favour of back-to-back coverage of the "cause du jour". Again, this is not a new phenomenon; Moroccan writer Hassan Masiky published a scornful critique on Morroccoboard.com of Al-Jazeera's bias, referring to the manner in which Al-Jazeera ignored and sidelined important stories, such as that of Mustapha Salama Ould Sidi Mouloud who was arrested on September 21, 2010 by Algerian authorities and that of Polisario figures who spoke out in favour of the Moroccan Autonomy Plan for the Western Sahara.

Masiky concluded: "The Moroccan public, which initially endorsed Al-Jazeera, is dismayed with its obvious anti-Moroccan biases. It will take more than shouting matches and anti-Israeli rhetoric to convince some viewers of Al-Jazeera's objectivity and balance."

More recently, certain political affiliations have been made obvious by the absence of coverage of events in countries such as Bahrain. In a recent article in the British daily 'The Independent', Fatima Kanji decried the absence of media interest. "The uprisings in Bahrain have seen little media coverage and a continuation of western political allegiances with the current regime, despite widespread acknowledgement of the use of torture against detainees, violence against demonstrators and inequitable arrests and trials."

This has certainly been the case with Al-Jazeera and Al-Arabiya, channels that have all but ignored the brutal crackdowns on Bahraini protesters in favour of maintaining favourable relations between their respective countries and not encouraging protests in their own capitals. Al-Jazeera reporter Ali Hashem resigned in March 2012 over coverage of Bahrain and Syria, along with iconic presenter Ghassan bin Jeddo who stated that Al-Jazeera had "ended a dream of professionalism and objectivity".

Like the quest for freedom and democracy, objectivity in the media is a one way street. It is not negotiable. You are either for it or, against it.

Amira Mohsen Galal is a broadcast journalist and political analyst focusing on the Middle East. She is a graduate of Wadham College, Oxford. She holds Masters Degrees in both Middle East Studies and International Journalism.

Alaa Abd el-Fattah, arguably Egypt’s most prominent democracy activist, has just been handed another lengthy prison sentence. Despite this, a book of his writing has recently been ... END_OF_DOCUMENT_TOKEN_TO_BE_REPLACED

People in Arab countries have been talking more openly about sex and sexuality for some time now, especially on social media. And for the first time ever, they have the vocabulary ... END_OF_DOCUMENT_TOKEN_TO_BE_REPLACED

Research project "The Global Qur'an", brainchild of Professor of Islamic Studies Johanna Pink and sponsored by the European Research Council, analyses the history and ... END_OF_DOCUMENT_TOKEN_TO_BE_REPLACED

A prominent rights group in Egypt, the Arabic Network for Human Rights, is ending operations just as the country braces for a controversial NGO law. Is this the beginning of the ... END_OF_DOCUMENT_TOKEN_TO_BE_REPLACED

Arab youth express their hopes and wishes for the New Year, spanning everything from civil and political rights, to education, to arts and culture. By Rafiah Al Talei END_OF_DOCUMENT_TOKEN_TO_BE_REPLACED

Her grandparents are Jews – born in Tunisia and Algeria. Director Cleo Cohen has now broken the silence about this with a very personal debut. By Nadine Wojcik END_OF_DOCUMENT_TOKEN_TO_BE_REPLACED
Author:
Amira Mohsen Galal
Date:
Mail:
Send via mail

END_OF_DOCUMENT_TOKEN_TO_BE_REPLACED
Social media
and networks
Subscribe to our
newsletter