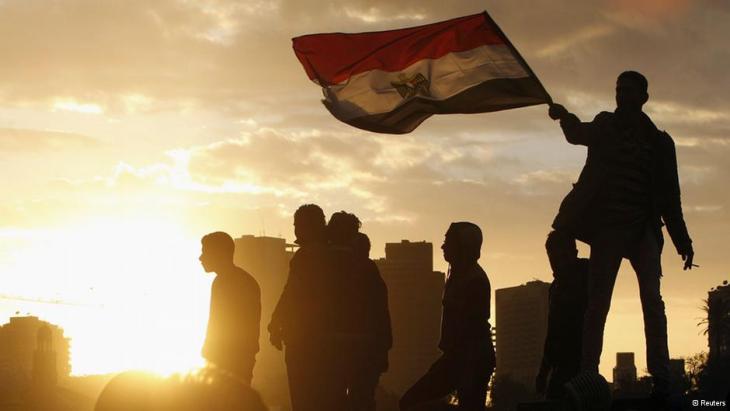 Analysts have gleefully declared the Arab Spring to have failed. What they don't understand however, is that fundamental societal changes don't occur over night. In her essay, Ingrid Thurner pleads for more time for the Arab Spring

The media as a whole, including the more serious press, has taken pleasure of late in burying the Arab Spring. Commentaries have practically invoked an Arab Winter. One can read headlines such as "Democracy has no chance in Egypt" or "The experiment has probably failed for the foreseeable future."

All the while, change is fully underway in Syria, Egypt, Tunisia, and Libya, people are fighting and dying, yet there are also negotiations. Nothing has been decided one way or the other in any of the countries that have undergone revolution. However, the tone coming from Europe sounds decisively derisive. "There is no way you can succeed." Why is it that we won't give them any time?

The great fear is that still more refugees are on the way. Of course, more refugees are now coming. But there would be far fewer if conditions in their homelands were more favourable or even tolerable. In the medium-term, things will only get better when the entire population can participate in the decision-making process and have a say in controlling the national wealth. 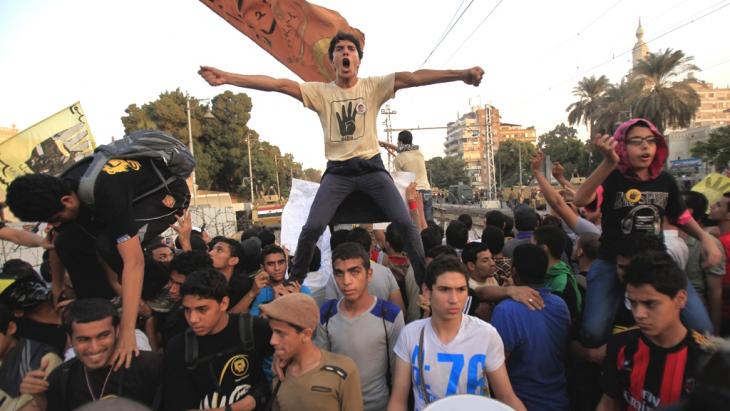 Caution against short-sighted generalisations: "The fact that the Muslim Brotherhood's entire political echelon turned out to be complete dilettantes when it came to governing, doesn't mean that democracy in Arab or Muslim countries is always doomed to failure," Ingrid Thurner writes. Pictured: protest march of supportes of the Muslim Brotherhood

The talk is about the failure of all of the political actors. Of course, they have all failed – all of them, worldwide. Yet, one would at least expect moral support and encouragement for the grand project of Arab democracy from the part of intellectuals instead of the gloating grins that have met every setback, which, without saying, could have been expected.


There are allusions now to the anti-intellectualism of the Egyptian Muslim Brotherhood. But what are a few dimwits in comparison to the 1400 years of Arab-Islamic spiritual history? They weren't even given the opportunity to learn from their mistakes. And the fact that the Muslim Brotherhood's entire political echelon turned out to be complete dilettantes when it came to governing, doesn't mean that democracy in Arab or Muslim countries is always doomed to failure nor in no way proves that Islam is fundamentally incompatible with democracy.

Persistent efforts will nonetheless be needed until most people realize that democracy is not a state of affairs that emerges at one stroke, but is rather an on-going process requiring daily toil and continual negotiation for compromise.

Most regard the French Revolution of 1789 as the mid-wife of European democracy, with the Enlightenment as its precursor and its roots to be found in antiquity. Yet, how long did the populations of the Western world have to wait before enjoying the right to participate in the political process? Revolutions were followed by counter-revolutions and restorations, endless setbacks, and two world wars, complete with extermination camps and genocides. 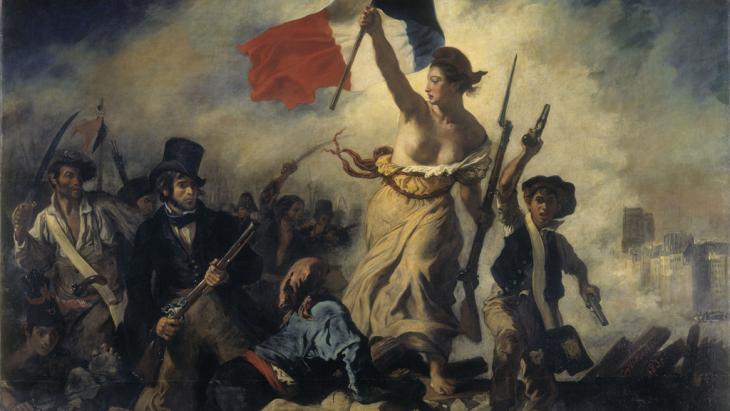 The French Revolution is considered to be the mid-wife of European democracy – but the populations of the Western world had to wait long before enjoying the right to participate in the political process, Thurner remarks. "Revolutions were followed by counter-revolutions and restorations, endless setbacks, and two world wars, complete with extermination camps and genocides," she writes. Pictured: Eugène Delacroix' "Liberty Leading the People"

In recent months, churches and buildings belonging to the Coptic Church have suffered numerous arson attacks, been stormed, torn down, and laid to waste. Europeans have been quick to name the culprit. Blame for the misdeeds and desecrations has been place on a diffuse group, known here as "Islamists". Europeans have no doubt that it was the religious fanatics and allow for no presumption of innocence.


In Cairo, by contract, there are other theories. There are persistent rumours that the perpetrators were not (only) religiously motivated extremists, but rather government hired thugs responsible for sowing the violence. It has been a tradition since Mubarak that certain sensitive jobs were reserved for tough mercenaries. These men for doing the dirty work possess a particular expertise in sexualized violence.

In recent years, criminal gangs (Baltagiya in Egyptian) were always involved in incidents where many lives were lost, such as at Tahrir Square, the stadium in Port Said in 2011, the storming of the protest camps in mid-August, and the subsequent "Friday of Rage". It remains unresolved whether the violence against Copts and the destruction of their churches and official buildings can be attributed in large part to these paid hooligans – and, correspondingly, their employers. Their intentions are easily discernable and their methods – divide and conquer – have been tried and true since antiquity. It is simply a matter of driving a wedge between different segments of the population and then playing them off one against the other.

Such scenarios are all too familiar from history books. What is tragic, however, is that people always seem ready to accept negotiations as a way of solving conflicts only when the shooting has not led to any satisfactory results. One would like to cherish the hope that similar incidents won't always have to end in bloodshed. 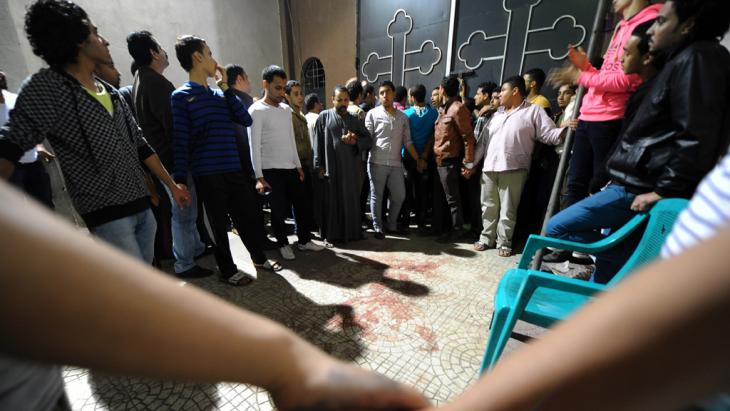 In recent months, churches and buildings belonging to the Coptic Church have suffered numerous arson attacks, been stormed, torn down, and laid to waste. Europeans have been quick to name the culprit. Pictured: Egyptians gather at a Coptic Christian church in Cairo on 20 October 2013 after gunmen on motorcycles opened fire, killing a woman and wounding several people

Yet, it appears that Egypt is currently experiencing a variation of that phase in which the revolution devours its own children. Where now are the thousands who filled Tahrir Square in early 2011? Somehow, those upon whose shoulders rested so much hope, the so-called "liberal" forces, have since disappeared from the streets of Cairo and from the media. Some have defected, while others have retreated into private life.


More time for the Arab Spring

Sooner or later, they will once again arise out of anonymity and voice their discontent. They will demand bread and self-determination, in other words, popular sovereignty, as only this can guarantee the political and economic participation of the whole population.

Stabile democracies in many Western countries were only established after 1945 – a whole century-and-a-half after the French Revolution. And even still, the maintenance of democracy requires constant efforts. Populism, special interests, and right-wing extremist groups continue to pose a threat to the achievements of political participation, the welfare state, and human rights.

It is only natural that developments in North Africa and the Middle East will unfold at a different pace and with their own structures in contrast to those already familiar democratization processes. But the Arab struggle for popular sovereignty is not even three years old. The spark that lit the Arab revolutions first appeared on December 17, 2010 with the self-immolation of Mohamed Bouazizi, a Tunisian vegetable vendor. Bouazizi immediately became a hero across the Arab world and today every school child in the region knows his name.

Ingrid Thurner is an ethnologist, lecturer at the Institute for Cultural and Social Anthropology of the Vienna University, and member of the Participatory Media Observer Initiative in Vienna (www.univie.ac.at/tmb).

This article was previously published in German by Neue Zürcher Zeitung on 31 Oktober 2013.

Abortions are illegal in Egypt unless they are necessary to save a married woman's life. But that doesn't stop local women from having one. Egyptian society needs to acknowledge ... END_OF_DOCUMENT_TOKEN_TO_BE_REPLACED

Food prices doubled, salaries halved, banks restricting withdrawals: Egyptians now have the same problems as the Lebanese. But if things get worse here, the fallout will be far ... END_OF_DOCUMENT_TOKEN_TO_BE_REPLACED

Giessen, Eichsfeld, Kusel, Berlin – cars bearing old German number plates are the latest trend on the streets of Cairo. Many Egyptians regard the discarded plates as chic. What ... END_OF_DOCUMENT_TOKEN_TO_BE_REPLACED

Egyptian Sufis have been on the defensive against the country's Islamists for decades. Meanwhile, interest in mysticism is growing among the young members of Cairo’s middle and ... END_OF_DOCUMENT_TOKEN_TO_BE_REPLACED

Chinese President Xi Jinping's visit to Saudi Arabia in December 2022 may have rattled Washington, but it simply highlighted the Arabs’ desire to diversify their foreign relations ... END_OF_DOCUMENT_TOKEN_TO_BE_REPLACED

END_OF_DOCUMENT_TOKEN_TO_BE_REPLACED
Social media
and networks
Subscribe to our
newsletter