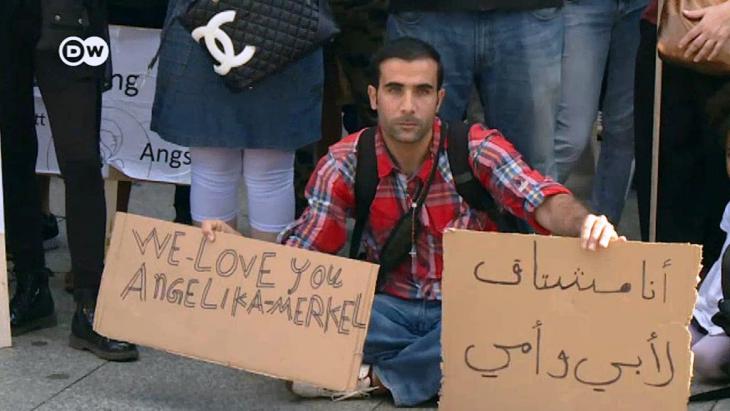 The Arab view of the European refugee crisis
Ludicrous squabbling

Syria’s Middle Eastern neighbours have to date absorbed four million Syrian refugees. For this reason the EU should make it plain that despite images of train stations full of refugees, Europe is only shouldering a relatively small part of the current burden. A contribution to the debate by Karim El-Gawhary

Pictures of Angela Merkel with angel wings and German trains sprayed with the words "you are very welcome" in Arabic are currently circulating social media in the Arab world.

Arabic tweets are also full of praise for the role of Austria in the crisis: "Although most of the refugees have a different religion, look different and speak a different language, 20,000 Viennese people came out onto the streets for the refugees," read one appreciative Arabic tweet.

Arguments that "the European boat is full" are on the other hand met with incomprehension, particularly since Syria's neighbours - with four million registered refugees - bear a burden in this crisis that goes well beyond Europe's imagination.

Right now in the small nation of Lebanon, at least one in every four residents is a Syrian refugee. In German terms, this would translate into 20 million, and in Austria two million refugees. Two million Syrians live in Turkey. And even the small country of Jordan has taken in around 630,000. Viewed in this light, from the perspective of these nations, the European refugee problem looks rather like a mini-crisis.

And it is these nations in particular, which so far have absorbed the majority of the refugees, that presently feel left in the lurch by the rest of the world and also by their European neighbours. For this year alone, the UN refugee agency needs donations totalling 4.5 billion US dollars to provide refugees there with the bare minimum. But so far, it has received less than 40 percent of that sum. In concrete terms, this means that refugee assistance such as that being offered in Lebanon will have to be curtailed, with education programmes likely to feel the impact first. 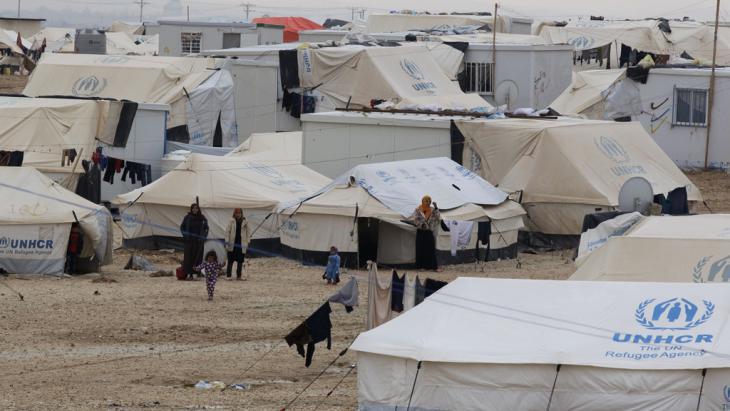 Huge burden for the Hashemite kingdom: the UN puts the total number of refugees in Jordan at 600,000. Observers assume that there are many more unregistered refugees in a nation with a population of just 6.5 million. The UN organisations World Food Program (WFP) and UNHCR have already had to repeatedly scale down their support for people in the camps due to a lack of funds, drastically cutting back on food rations, for example

At the moment, 750,000 Syrian school-age children are not attending school. An entire generation is going to the dogs, a generation that should actually be the one to rebuild its nation in the future. Those who cry out today that "the European boat is full" should at least take financial measures to ensure that the Lebanese, Turkish and Jordanian boats don't sink!

Seen from the Middle East, the European refugee problem is a relative one. Yet images of public-spirited behaviour in Germany and Austria are nevertheless also encouraging people to critically examine their own.

A photo montage has been doing the rounds of Arabic Facebook pages for a week: a Syrian refugee child washed up on a beach lies on an Arab League conference table, the image usually furnished with the comment, "And what are you doing?!"

The main criticism is aimed at the oil-rich Gulf States, who are partly responsible for causing the problems in Syria, but who are now keeping their distance from the refugee crisis and not supporting Syria's neighbours. An alleged quote by Merkel is also circulating on Arab social media: "Tomorrow we will tell our children that the Syrian refugees came to us – although Mecca, the heart of Islam, is much closer." 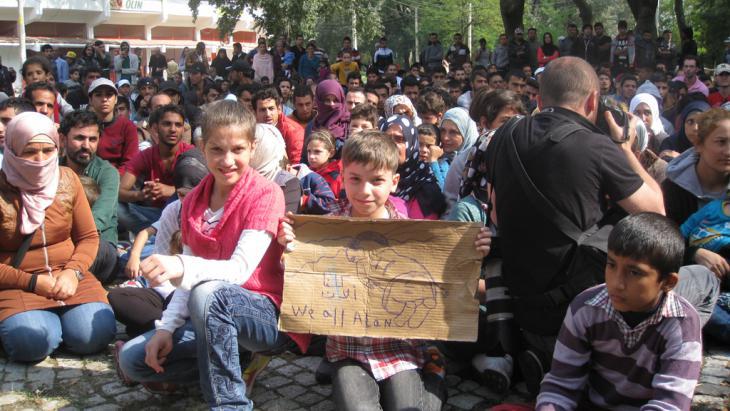 Transit nation Turkey: the OECD says that many people are waiting outside their homeland for an onward journey. Around two million Syrian refugees are currently living like this in Turkey. There are also some 300,000 people from Afghanistan, Iraq and Pakistan waiting for an opportunity to travel to the EU

Merkel never said any such thing, but in the Arab world too, the social media don't just reflect reality, they also create it themselves. In this vein, a discussion as to why the Gulf States are smashing world height records building shimmering skyscrapers, when they are apparently incapable of building camps for refugees was one hot topic recently.

Not a question of "either Europe or the Gulf"

For the Arab public, it not only took the reports from Syria's over-burdened neighbouring states, but also the images of the many helping hands in Europe, to accost the Gulf States with a "shame on you campaign". The Gulf States have never been the object of so much internal Arab criticism as they are now.

And the summary of the external perspective on the European refugee crisis? In the EU, one must be aware that despite the full railway stations and corpses lying at the edge of a motorway, the region is only shouldering a relatively small part of the refugee problem. Undoubtedly, the Arab Gulf States in particular could be doing more to relieve Syria's neighbours. But this is by no means a question of "either Europe or the Gulf": this refugee crisis is too large to allow anyone to opt out of pitching in and helping out.

Even in times of war and pandemic, refugees are still being deported to Afghanistan. Several deportation flights have taken place in recent weeks alone. Since those affected often ... END_OF_DOCUMENT_TOKEN_TO_BE_REPLACED

On 7 March, Switzerland became the latest European country to vote in favour of a so-called "burka" ban. It was yet another feather in the cap of the right-wing populist Swiss ... END_OF_DOCUMENT_TOKEN_TO_BE_REPLACED

What drives young men into the arms of Islamist extremists – and how can they be re-integrated into society? Five years after the deadly attacks in Paris, urgent questions remain ... END_OF_DOCUMENT_TOKEN_TO_BE_REPLACED

Austria's chancellor is seeking to criminalise "political Islam". The move would put non-violent, non-radical Muslims under blanket suspicion and is hardly helpful in the fight ... END_OF_DOCUMENT_TOKEN_TO_BE_REPLACED

Rather than suspecting Muslims in general, we need to co-operate more with Islamic scholars, Muslim congregations and associations, writes Muhammad Sameer Murtaza in his ... END_OF_DOCUMENT_TOKEN_TO_BE_REPLACED

END_OF_DOCUMENT_TOKEN_TO_BE_REPLACED
Social media
and networks
Subscribe to our
newsletter