The Arabs and Nazi Germany
Collaborators and Antagonists

The involvement of Arabs with the 'Third Reich' has been much politicised. The fact is, however, that there were collaborators such as the notorious Grand Mufti of Jerusalem, but also Arab 'Schindlers', like the Tunisian Khaled Abdul-Wahab. Sonja Hegasy gives an overview 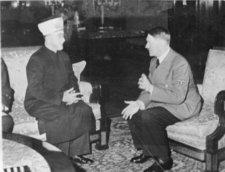 Sordid alliance: In 1941 Mohammad Amin al-Husayni, Grand Mufti of Jerusalem, met with Adolf Hitler and requested that Nazi Germany oppose the establishment of a Jewish national home in Palestine

​​Through the sources available, we know of Arab collaborators in the Holocaust as well as Arab protectors of Jews. But to make a statement about wider Palestinian and Arab collaboration with Nazi Germany that holds up to historical verification, one must, of course, not draw conclusions from the propaganda the Nazis delivered themselves.

Many local sources such as daily newspapers, cultural magazines, cartoons or memoirs from the 1930s and 1940s actually display strong opposition to European anti-Semitism. They describe Germany's assault on its neighbours as part and parcel of fascist imperialism, which Arabs had already experienced with the rise of Mussolini and his expansionist operations in North Africa.

Robert Satloff, Director of the Washington Institute for Near East Policy, discovered several stories of Arabs who saved the lives of their Jewish neighbours. In 2007 Satloff had the Tunisian Khaled Abdul-Wahab nominated as the first Arab to be declared a Righteous among the Nations at the Jewish Holocaust Memorial Yad Vashem. But his efforts were rejected two years later on the grounds that Abdul-Wahab did not risk his life, as he did not act against Tunisian law while caring for two Jewish families when their house was confiscated during the German occupation. 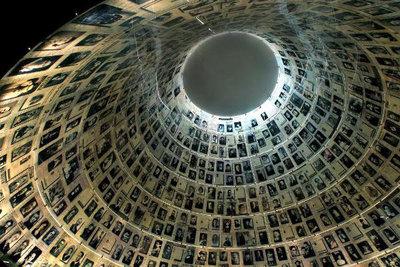 Despite the fact that a considerable number of Arabs helped save Jews from being deported to death camps, not a single Arab is honoured by the Holocaust Memorial Centre Yad Vashem

​​This sparked a debate between Mordecai Paldiel, former director of Yad Vashem's Department of the Righteous, and its current director Irena Steinfeldt on the interpretation of the "risk to one's life principle" that has been an elemental condition for the Righteous title at Yad Vashem.

Paldiel argued in favour of Wahab's recognition as being 'Righteous', as other Europeans had been awarded the title on the grounds that they were "in jeopardy of eventual punishment" – just like Abdul-Wahab. Still, for now, the posthumous award has been denied to Wahab.

Like all French overseas colonies and protectorates, Morocco, Algeria and Tunisia came under Vichy rule in 1940. Anti-Semitic laws and policies were introduced immediately. It was the second great European war unfolding before North African eyes, with Italy and Germany competing in their greed for North African territory. The Israeli historian Nir Arielli reconstructed the Italian government's ambitious plan to divide up the Middle East – after an expected victory – drawn up in July-August 1940 from two separate documents prepared by the Royal Italian Army's Ufficio Operazioni. 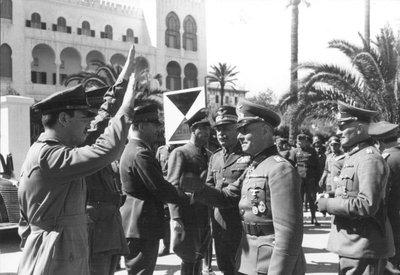 ​​The plan's expansionist aspirations even saw the Arab East under direct Italian domination in addition to the "classical strongholds" at the Horn of Africa and in Libya and Chad; a plan that clearly collided with Hitler's own ambitions. Both leaders' aspirations were of course concealed from regional actors and wholly contradicted the latter parties' struggle for independence.

For some of the rising national movements it was an open question whom to turn to for support. Many believed in the Allied Powers' goal of liberation and independence. The Wafdist government in Egypt, for instance, turned out to be a staunch pro-British ally all through the war.

For Moroccan nationalists, both Italy and Great Britain were feasible alternatives in order to fight the French. Some advocates of independence saw the fascist ideology at the time as a form of ultra-nationalism and as such an option in the national struggle. But this does not really tell us anything about underlying convictions of Arab movements. 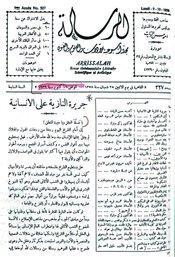 ​​Some nationalists at the time were outright anti-Semites. But many Arab leaders and intellectuals had no doubts about the ultimate goals and racist nature of fascism and Nazism. They were struck by how the enlightened German nation gave itself up to, in the words of Ahmad Hasan al-Zayyat, a "barbaric crowd of warriors".

Al-Zayyat was the owner and editor of the most important intellectual weekly in 1930s Egypt and the Arab world, Al-Risala. He expressed stands against Nazi Germany and Hitler in a most lucid manner, particularly on the eve of the war and its outbreak.

Israel Gershoni, a professor of history at Tel Aviv University, has researched a number of Egyptian cultural magazines from the inter-war period, including al-Hillal (The Crescent) and al-Risala (The Message). According to Gershoni, here the persecution of Jews in Germany was a central theme early on, and it was mostly critically reviewed.

Pro-fascist inclinations and the fall of the cotton price

However, large segments of society were apolitical. In Egypt, people were primarily occupied with a drop in the cotton price due to the war economy and later feared that British occupying forces would draw them into the war. As in Europe, information about the Holocaust leaked out only sparsely and it can safely be assumed that many Arabs regarded this information as impossible to believe, as did even members of the underground resistance against the Hitler regime in European countries. 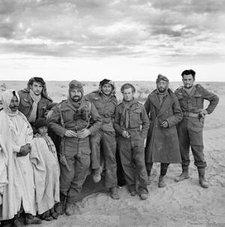 "Almost universal approval": Many Arab sources from the 1930 and 1940s describe Germany's assault on its neighbours as part and parcel of fascist imperialism. Pictured: French SAS troops

​​James Jankowski analyzed reports by British officials travelling through the country to assess pro-fascist inclinations within the Egyptian public. Anti-British and pro-German voices were mostly found in the entourage of King Faruq and the abducted minister Ali Mahir, as well as in some clandestine cells in the army. But the "potentially dangerous movement of the Muslim Brothers had reached agreement with the Wafd and remained politically quiescent," according to Jankowski.

Jankowski's sources speak of "almost universal approval" of the advances of the British and Free French forces in 1941.

The British embassy's Assistant Oriental Secretary, John Hamilton, reported in 1939 that the Egyptian State Radio was "by far the most popular source, foreign stations being listened to only by 'selective listeners'." Of foreign stations, his sources cited Italy's broadcasting as the most popular; in contrast, according to his informants, "German broadcasts are immediately switched off as being offensive rubbish." 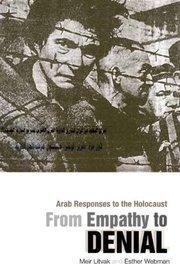 The rise of Holocaust denial as a counter-reaction to the hardening of the Israeli-Palestinian conflict: Cover of From Empathy to Denial

​​Even before the end of WWII, Arab regimes recognized and condemned the German genocide. In preparing the foundation of the League of Arab States in 1944, the Arab committee signed a statement saying, "that it is second to none in regretting the woes which have been inflicted upon the Jews of Europe by European dictatorial states. But the question of these Jews should not be confused with Zionism, for there can be no greater injustice and aggression than solving the problem of the Jews of Europe by another injustice, i.e., by inflicting injustice on the Arabs of Palestine of various religions and denominations."

With regard to the Middle East conflict, a dangerous conviction is beginning to emanate from the distorted reading of Arab reactions to fascism. The allegation of Arab participation in the Holocaust is now being directly connected to the land dispute between Israelis and Palestinians. In 2009, as Ha'aretz has reported, Israel's foreign minister Avigdor Lieberman sent out the prominent photo of Hitler greeting the Grand Mufti of Jerusalem Mohammad Amin al-Husayni in 1941 to the PR departments of Israeli embassies, "to counter world criticism of a Jewish building plan for East Jerusalem".

A recent publication, From Empathy to Denial: Arab Responses to the Holocaust by Meir Litvak and Esther Webman, shows the rise of Holocaust denial as a counter-reaction to the hardening of the Israeli-Palestinian conflict.

Alleged "Arab participation" in the Holocaust is being blown out of proportion for political reasons. Collaboration can of course not be neglected. But to construct the collaborators as representative for a majority of Arabs and to deliberately forget Arab victims and resistance does not do justice to historical accounts.

Dr. Sonja Hegasy is vice director for external relations of the 'Zentrum Moderner Orient' (ZMO) in Berlin. She holds degrees in Islamic Studies and Political Science. Currently she is heading a research project about remembrance culture in the Arab world.

Holocaust Research
The Arab Righteous of the Maghreb
Was there an Arab Raoul Wallenberg? This question was the inspiration for Robert Satloff's five-year research into the "lost stories of the Holocaust's long reach into the Arab lands". Götz Nordbruch takes a look at Satloff's findings

National Socialism
Are Arabs Turning a Blind Eye to History?
A recently published study conducted by the Centre for Modern Oriental Studies in Berlin illustrates the complexity of the relations between Arabs and National Socialism. Lennart Lehmann read the study for Qantara.de

Comments for this article: Collaborators and Antagonists

END_OF_DOCUMENT_TOKEN_TO_BE_REPLACED
Social media
and networks
Subscribe to our
newsletter