"The Arabs and the Holocaust"
War of Narratives

"The Arabs and the Holocaust" is the first comprehensive study in Arabic of the complex relationship of the Arabs to the Holocaust. Lebanese historian Gilbert Achcar set out with his research to shed light on the Holocaust above all for the benefit of the Arab World. Samir Grees read the study and spoke with the author

​​ The theme of the Holocaust triggers mixed feelings and associations in many Arabs. Some think it's a case of Zionist propaganda designed to legitimate the existence of the State of Israel. Others recognise the Holocaust as a historical fact, but as one that belongs to the past; it's more important, they say, to deal with the injustices taking place in our present day and to talk about the acts of violence and the crimes perpetrated by Israel itself.

Still others point out that the horrors of the past, including the Holocaust, should not be used to grant anyone "moral immunity" or a "special status" under international law.

The problem with these arguments is that they have a tendency to downplay or relativise the crimes of the past – even going so far as to deny them in some cases. Holocaust deniers such as Roger Garaudy, David Irving and Mahmoud Ahmadinejad are celebrated as heroes by many Arabs. It's more problematic still, though, when people talk about the Holocaust or the Nazis although they know little – very little – about them.

It is this very gap in knowledge that Gilbert Achcar, a Lebanese historian at the School of Oriental and African Studies in London, wishes to fill with his insightful and well-researched book. "The Arabs and the Holocaust – The Arab-Israeli War of Narratives" is the first broad-based study by an Arab historian of the complex relationship the Arabs have to the Holocaust. It is an objective and scholarly examination of major significance, as Ulrike Freitag, director of the "Zentrum Moderner Orient" (ZMO) in Berlin, confirms.

Is there such a thing as "the Arabs"?

The "Arabs" do not exist as a political unit and do not have a homogeneous identity – says Achcar – just as one can hardly speak of "the Muslims" or "the Jews".

Achcar thus endeavours in his study to explain the differences between various Arab stances on the Holocaust and on Zionism. For the 1940s era he has distinguished four major standpoints, which he classifies as liberal, Marxist, nationalist and religious/Salafist. 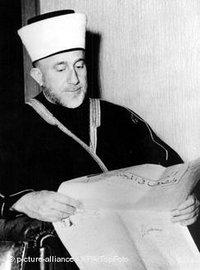 We must not assume that all Arabs shared the Nazi-friendly attitude of the Mufti of Jerusalem, says Achcar

​​ Amongst these can be found positions ranging from explicit condemnation of the Nazis to declared hostility toward Jews. According to Achcar, 1940s Arab liberals and Marxists differentiated between Jews and Zionists and unambiguously condemned the Holocaust. The nationalists, however, found favour with the Nazi/fascist "role model" and attempted to emulate it. The religious/Salafist current in turn selectively interpreted certain Koran suras to develop a discourse hostile to Judaism, infusing it with content taken from anti-Semitic writings such as "The Protocols of the Elders of Zion".

The attitudes of these various groups by no means provide grounds for accusing the Arabs of being directly involved in the Holocaust, however. Achcar describes such allegations as a "caricature". Admittedly, the Grand Mufti of Jerusalem, Sheik Amin al-Hussaini, had close contact with Nazi leaders including Hitler and Himmler.

But this is all well known and documented, noted Achcar in an interview with Qantara.de: "The Mufti played an important role in pro-Nazi and pro-fascist propaganda in the Arab and Islamic world. He participated in racist Nazi campaigns against Jews and in the formation of two battalions of Muslim soldiers in Bosnia that fought alongside Nazi troops." Nevertheless, we must not assume that the attitudes of the all-pervasive Mufti were shared by all Arabs. Even back then, many in fact denounced this position.

Placing the Mufti in historical perspective

This appraisal of the situation is also shared by historian Ulrike Freitag, who points out the importance of the historical context at a time when the Palestinians were confronted with the mass immigration of Jews into their homeland. Only "a minority" of the Arabs supported the Mufti's pro-Nazi views, she says.

"The Holocaust is a German crime," says Ulrike Freitag. "It is the crime neither of the Arabs nor of others."

​​ The role of al-Hussaini has been "grossly exaggerated", Achcar argues in his book. As example he cites the Holocaust Encyclopaedia published by the Yad Vashem Memorial, which devotes to the Mufti of Jerusalem the second-longest article after Hitler, as though he had borne direct responsibility for the Holocaust. "The Holocaust", Freitag adds, "is a German crime. It is the crime neither of the Arabs nor of others."

Furthermore, Achcar notes that the number of Arabs who joined forces with Nazi troops amounted to no more than 6,000 men. There were however some 9,000 Palestinians who fought alongside the British, as well as about a quarter of a million Moroccans who joined the French in battling the Nazis: "Despite these facts, books are still published in all languages that try to convince us that the Arabs were Nazi sympathisers. That is libel," Achcar states.

Achcar cites the long history of anti-Semitism in Europe, while in the Arab countries hostility against Jews did not exist in this form until the Palestine question arose.

It is well known that the position of Jews in the Islamic world was in general better than in Christian climes, says Achcar: "Where did the Jews flee to when they were driven out of Spain? To the Islamic world." This is confirmed by the director of the Zentrum Moderner Orient, who adds that Jews lived in the Arab world without any problems until the 1930s. "The picture only changed with increasing Jewish immigration into Palestine."

On the other hand, Achcar criticises the "philosemitism" that prevails in some European countries. He attributes this attitude to the Europeans' guilty conscience, but believes that this form of "emotional and uncritical love" and anti-Semitism are two faces of the same coin.

The motives of those in the Arab world who did sympathise with the Nazi regime is another area Achcar illuminates in his book. Despite the Arabs' belief that an alliance with the Nazis would help them in their conflict with the British and the French, the author was unable to detect widespread support for Nazi ideology in the Arab realm. 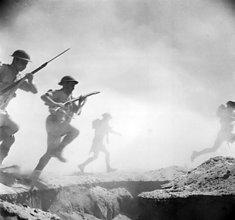 The enemy of my enemy is my friend: Some Arabs hoped that an alliance with Nazi Germany might be useful in their conflict with the British and the French. Pictured: British infantry in El Alamein in 1942

​​ How, then, to explain the popularity of Hitler with the Arab common man? Why did demonstrators in the streets of Cairo shout out "Go, Rommel, go!" during the Battle of El Alamein in 1943? Can this enthusiasm be explained away merely by the idea: "The enemy of my enemy is my friend"? Or was there in fact a deep-rooted anti-Semitism in the Arab countries at the time?

Here as well, accounts have been very exaggerated, Achcar said in the interview. "Yes, part of the populace, those who were extremely naïve politically, thought Hitler was a hero." But similar views were also held in countries under British colonial rule.

"I believe that the main reason for Arab support of Nazi Germany was actually the hostile attitude of the Germans toward the colonial powers", Ulrike Freitag agrees. She adds: "We also have to remember, though, that there were certain groups in the Arab world who adopted parts of the Nazi mindset."

Holocaust denial as ignorance and lack of information

For many Arabs, the Holocaust is a "myth" used to justify the founding of the State of Israel. Achcar convincingly explains the reasons behind this point of view in his book. Here as well, he distinguishes between four different stances that have emerged over the decades and emphasises: "Yes, denial of the Holocaust is spreading, but we must not present this attitude as if all Arabs were Holocaust deniers. Most believe that the Holocaust was a barbarous atrocity."

That some Arabs knew about the Holocaust is incidentally revealed by a diary entry made by al-Hussaini after a meeting with Heinrich Himmler in summer 1943: he notes that Himmler told him that around three million Jews had already been annihilated. So the Mufti himself did not deny the existence of the Holocaust. 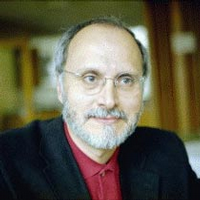 Filling the gaping lack of information on the Holocaust in the Arab world: Gilbert Achcar

​​ What moves many today to deny it or to doubt the number of victims has to do with the instrumentalisation of that atrocity by Israel in the Middle East conflict: the Israelis use the Holocaust to justify their policies, says Achcar. The former Israeli Prime Minister and Foreign Minister Menachem Begin hence once stated that, after the Holocaust, the international community had forfeited any right to call Israel to account.

It is this very attitude that moves many in the Arab world to deny this horrific crime or to relativise the number of victims. All of this, however, "is in the end detrimental to the Palestine question", says Achcar.

Perhaps this is why, in a declaration presented by the poet Mahmoud Darwish on the 50th anniversary of the founding of Israel, the leading Palestinian politicians underscored that:

"If it is our moral duty to accept the Jewish account of the Holocaust as it is without entering into discussion about the statistical aspect of the crime, and to intensify our expression of sympathy for the victims, then it is also our right to ask the children of the victims to recognise the position of Palestinian victims and their right to life, liberation and independence."

"But there is also another reason to deny the Holocaust", comments Ulrike Freitag: "Namely, this stems from the fact that there is still not enough information on the Holocaust available in many Arab countries." It is precisely this gaping lack of information that Gilbert Achcar's study is now able to address. We can only hope that the book will find a large number of readers in all Arab countries.

German Mines in the Egyptian Desert
The Legacy of the Battle of El Alamein
65 years ago, one of the biggest tank battles in the Second World War took place between Rommel's Africa corps and Allied troops near El Alamein on Egypt's northwest coast. The mines that were left behind still claim victims among the civilian population. Frederik Richter describes the background

Global World War Research and the Middle East
"World History Is Historiography against the Grain"
The role of the Middle East and its inhabitants in the two world wars has barely been studied to this day. The Berlin 'Zentrum Moderner Orient' has been attempting to fill these gaps in historical research since 1995. By Sonja Hegasy

END_OF_DOCUMENT_TOKEN_TO_BE_REPLACED
Social media
and networks
Subscribe to our
newsletter