Faith Market before the Courts

The Archbishop of Canterbury created a furor by voting for the application, within limits, of the Sharia. The idea is not a new one, however. Critics maintain that for some time England has been under pressure to combine aspects of the Sharia with civil law. Gina Thomas reports 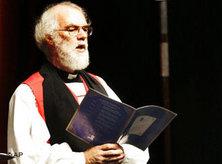 Rowan Williams, Archbishop of Canterbury, is the principal leader of the Church of England, as well as the symbolic head of the worldwide Anglican Communion

​​During his lifetime, James I was known as the wisest fool of Christendom, "deeply learned, without possessing useful knowledge; sagacious in many individual cases, without having real wisdom," as his compatriot Sir Walter Scott wrote several centuries later. Some are saying similar things about Rowan Williams, the Archbishop of Canterbury, whose much-praised intellectual finesse is accompanied by a generous portion of naiveté.

There is no other viable explanation for his surprise at the uproar he recently unleashed – the defender of the Anglican faith referring to the integration of aspects of Islamic law into the British legal system as inevitable, warning against "inflexible or over-restrictive applications of traditional law" and stating that "a universalist Enlightenment system has to weigh the possible consequences of ghettoising and effectively disenfranchising a minority, at real cost to overall social cohesion and creativity."

Idea of a pluralist jurisdiction

The winding thoughts of an hour-long lecture for legal scholars cannot, of course, be reduced to a straightforward call for the parallel existence of Sharia and British law, as the headlines would have us believe. Yet the Archbishop's idea of a pluralist jurisdiction and a "legal market", where the consumer decides on one system or the other, appears to question the basic principle of equality in the eyes of the law.

Only a few weeks ago, the Pakistan-born Bishop of Rochester, Michael Nazir-Ali, complained that the British had lost their faith in the Christian vision – the basis of the majority of the achievements and values in their culture – in their enthusiasm for integrating immigrants from other cultures under the banner of multiculturalism.

This was prompted by Nazir-Ali's concern over the rekindled Islamic extremism that he claims has made parts of Britain into no-go areas. The Bishop commented that there was already pressure to link aspects of Sharia law with British civil law, and asked whether the consequences had been seriously considered. The head of the Anglican Church was the least likely candidate for confirming that breakdown in trust in the Christian tradition.

In Oxford, temperatures have been rising over Imams' wish to call to prayer via megaphone. Three senior judges are currently deciding whether the Sharia marriage of a Muslim who was not capable of giving his consent due to learning difficulties is "so offensive to the conscience of the English court" that it should not be recognised.

The British government recently approved additional . Sharia mortgages are now also permitted, as Islam bans interest charges. The Catholic Church, in contrast, has had to submit to the law granting homosexuals wanting to adopt children the right to equal treatment.

The Catholic adoption agencies had been unable to align this principle with their belief – and are giving up their activities in the area as a consequence. So it's no surprise that the Archbishop's statements have rocked the boat.

Great Britain
Protecting the Veil
The UK gives female police officers the option to wear the hijab on duty. With the government and British Muslims joining ranks against a ban on the headscarf, Britain prefers integration to assimilation. Tareq Al-Arab reports

Integration Policy in Britain
The Influence of Common Law
The British find it difficult to understand the arguments about Islamic headscarves which are currently blazing in France and Germany. Lennart Lehmann about differences of British, French and German approaches to integration policy.

Muslims in Britain
The Development of a Radicalised Identity
It is especially the youth of Britain's 1.5 million Muslims that feels marginalised and caught between cultures. In trying to compensate for feeling weak, they increasingly turn to dogmatic schools of thought. An analysis by Tahir Abbas

END_OF_DOCUMENT_TOKEN_TO_BE_REPLACED
Social media
and networks
Subscribe to our
newsletter