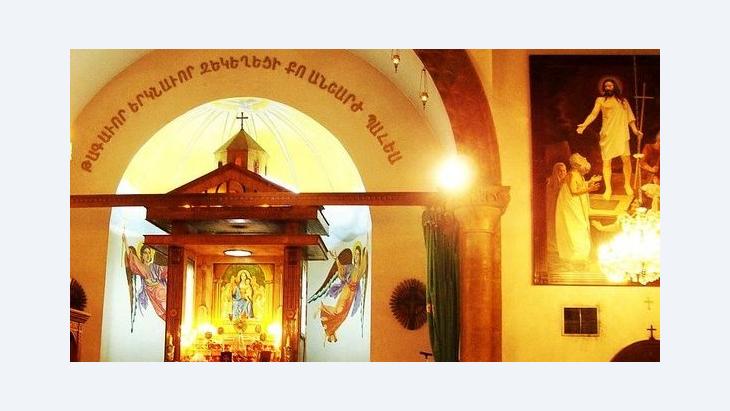 The Armenian-Syrian Musician Hrach Macoushian
''It is Craziness to Support the Assad Regime!''

﻿Hrach Macoushian is a musician from Aleppo in Syria. The Armenian with Syrian citizenship came to Yerevan two years ago to escape military service in Syria. Lennart Lehmann talked to him about the prospects for the Armenian minority in Syria and about his experiences under the Assad regime

What does the Armenian minority in Syria think about the Assad regime?

Hrach Macoushian: The Armenians in Syria live outside the combat zone. Many of them support Assad.

What do the Armenians in Syria think about the civil war?

Macoushian: The Armenians are very detached from what is happening in Syria. They are very blinkered. They tend to keep themselves to themselves; stay within their own communities. Most Armenians don't have Arab friends. And that means more paranoia! 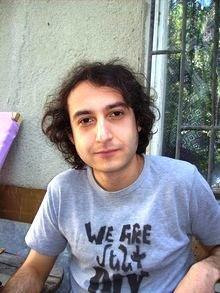 "Critics say the opposition is disorganised, but I say it is decentralised." Hrach Macoushian during the interview in Yerevan

​​They find out about what is happening outside their neighbourhood from the President and from the state media. They are told that there are terrorists out there, and if they get into power they will kill all Armenians, Christians and other minorities.

What made you turn your back on the Baath regime?

Macoushian: I have always been impressed by articulate people with persuasive ideas. I started playing concerts when I was 17 and spent a lot of time in the company of musicians. One evening, when I was 18, the security forces came to our house and they lied to my father. They said there had been burglary somewhere near his shop and asked him to accompany them to the Political Security Directorate. They said he should take me along as well. When we got there, they told my father to go. I was forced to stay; they abducted me.

They began to interrogate me. There were seven or eight of them, asking me questions and threatening me. They wanted to know the names of all my friends. The people I know. It went on for seven hours. Finally, I had to sign a piece of paper that said that I promised to stand by my country. After that, they took me home.

Why does the regime not trust you?

Macoushian: We played Western music. Metallica, Led Zeppelin. We would meet in houses. There are generally very few reasons for people to gather together in Syria, apart from family celebrations or religious ceremonies. The security forces saw that a group of young people were meeting and they saw it as a threat. They wanted to know what we were thinking, what we were talking about. 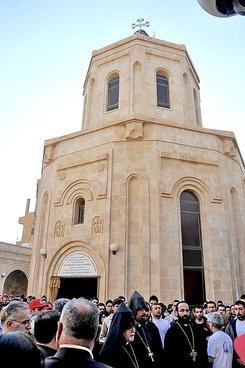 Armenian Genocide Martyrs' Memorial in Deir ez-Zor, Syria, a complex dedicated to the memory of the victims of the Armenian Genocide. According to estimates there are 150,000 Armenians in Syria

​​Sometimes we also met in the street, five people only, no more, and the police would ask us what we were doing there. I mean, people getting together is the most natural thing in the world – and they wanted to know why!

Your friends were tortured, you say?

Macoushian: Yes. And I have seen the torture devices. These things don't have proper names, only nicknames. One of them was called the "Flying Carpet", for example. It slowly bends your back until you can't breathe. I also met someone once who had been beaten on the soles of his feet with electric cables. The wounds were terrible. Another friend of mine lost an important document during his military service. They threw him into a small, dark cell, with no light at all, for three months. They call it the "Polish Prison".

He could hear the screams of people being tortured. He was only allowed out for a couple of minutes, once a day. For a long time afterwards, he wasn't able to walk. He hadn't committed any crime, you know. He hadn't killed anybody, but they stuck him in a black box.

I met a Kurdish girl whose brother had been abducted, just like I was. They tortured him and pulled out his fingernails. At least he came home. Others were not so lucky. Everybody in Syria knows stories like this. Everybody knows what is going on. If you are a dissident living in a rented apartment in a high-rise block – then they will come and just shoot up the whole building. It is craziness to support Assad. You support this regime? You support these procedures? Of course not! That's why I say the Armenians are stupid.

Some political groups in the world are reluctant to openly oppose the Assad regime. At the beginning many people were pinning their hopes on the young President Bashar al-Assad...

Macoushian: The Baath Party was founded by nationalist Muslims and Christians. Then one of them grabbed all of the power for himself. If you talk about the Baath Part today, then I don't see any socialism, unity or freedom anymore. I see only one greedy, power-hungry man and his family who have ruled Syria for 60 years. When Hafiz al-Assad had 50,000 people killed in Hama back in the 1980s it was more an ideological thing. But what is going on in Syria now is very different. Bashar al-Assad is only fighting for power.

If you grow up like Bashar, as son of a dictator, then you live in a phoney reality. Everyone lies to you; no one is honest with you. I think Bashar has problems recognising the truth. And I doubt whether there is anyone in the world who would want to be governed by someone who has problems recognising reality. And the system will go on. When some journalists asked Bashar how he explains what is happening in the country to his children, he replied that he tells them that the people he is fighting against are all terrorists. So he is passing on his own distorted picture of reality to the children who are supposed to one day govern Syria.

How do you assess the situation of the Syrian opposition?

How do the Armenians in Syria see the conflict going?

Macoushian: They believe that the regime will crush the rebellion and that everything will go back to the way it was before. But Syria will never return to the way it was before. Syria is going to be different. You have a common goal, and that is to fight oppression. Afterwards life will be different. Now it is time for the Syrians to make their voices heard, to say what they think. They have not been able to do that for many years. It is very possible that everything will not be as we might hope after the Assad regime falls. But it cannot be any worse than it is now.

Home
Print
Newsletter
More on this topic
Interview with the Syrian composer Malek Jandali: ''A free Syria can only exist without Assad''Syria's Minorities and the Uprising against the Regime: In Assad's FortressMinorities in Syria: United against Assad
Related Topics
Arab Spring, Arabellion, Assad regime, Democracy and civil society, Human rights, Minorities in the Muslim world, Syrian Civil War, Syrian opposition
All Topics

Fariduddin Attar’s "The Conference of the Birds", one of the seminal works of Islamic mysticism, has recently been published in sumptuously illustrated German translation. It ... END_OF_DOCUMENT_TOKEN_TO_BE_REPLACED

In "Iran. Die Freiheit ist weiblich", journalist Golineh Atai describes the dogged resistance of courageous Iranian women against the Islamic Republic and the mullahs who have ... END_OF_DOCUMENT_TOKEN_TO_BE_REPLACED

The violent death of 22-year-old Mahsa Amini has achieved something the entire opposition has failed to do during the 43-year rule of the ayatollahs in Iran: almost the entire ... END_OF_DOCUMENT_TOKEN_TO_BE_REPLACED

Like Christianity, Europe's history is one of migration. Both have strong roots in the Orient and in cultures thousands of years old. Cultural historian Bernhard Braun invites us ... END_OF_DOCUMENT_TOKEN_TO_BE_REPLACED

A lot is happening in Syria’s Sweida Governorate – foreign intervention there is unprecedented both in terms of scale and number of actors – yet Damascus remains the dominant ... END_OF_DOCUMENT_TOKEN_TO_BE_REPLACED

Russia is leaving no stone unturned in its attempts to make the Islamic Republic an ally in the war against Ukraine. Fortunately for Vladimir Putin, the mullahs in Tehran are ... END_OF_DOCUMENT_TOKEN_TO_BE_REPLACED
Author:
Lennart Lehmann
Date:
Mail:
Send via mail

END_OF_DOCUMENT_TOKEN_TO_BE_REPLACED
Social media
and networks
Subscribe to our
newsletter