The Assad Dynasty in Syria
From Father to Son

A trend is emerging in the authoritarian countries of the Arab world: political power is being handed down from generation to generation. Kristin Helberg takes a closer look at the phenomenon, highlighting the case of Bashar al-Assad in Syria

​​It is 10 June 2000 and the news-reader on Syrian state television is struggling to hold back the tears as he reads out the news of Hafez al-Assad's death. "His courage remained unbroken, his visions were boundless, his convictions unshakeable."

The shock of the president's death plunged Syria into a kind of paralysis. For 30 years, Hafez al-Assad had governed the country, making it a significant regional power abroad and stabilising it at home by ruling with an iron fist.

The "Lion of Damascus", as he was known (a play on his surname "Assad", the Arabic word for lion) was considered not only a clever strategist with a talent for pulling strings, but also a man who was unyielding and merciless to his political opponents. Those who saw the announcement of his death on television knew that it was the end of an era.

It was an era that had been dominated by the influence of the military, a reflection of Assad's military career. Born in 1930, Assad trained as a pilot in the 1950s, completing some of his training in the Soviet Union, and was later appointed head of the air force and minister of defence. He was made president following a military coup in 1970. 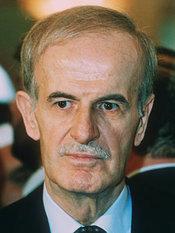 ​​At the time, Syrians wanted stability more than anything else. Between gaining independence from France in 1946 and Assad's grab for power, the country had seen 14 presidents; sometimes only a few months separated each coup.

For this reason, Hafez al-Assad built his power base on the military and the secret services, transforming the multi-ethnic state into a self-confident nation.

Ideologically, he preached Arab nationalism, which made religious, denominational, and ethnic differences fade into the background.

As a member of the Alawi community, which long suffered discrimination, Hafez al-Assad adopted the socialist secular ideas of the Baath Party. Under his rule, the influence of the mainly Sunni urban educated middle classes, which had dominated Syrian society until then, was eroded.

Relics of the Cold War

In the year 2000, however, it seemed as if time had stood still in Syria. Ten years after the collapse of the Soviet Union, socialism was still alive and well and prevalent in Damascus.

Syria's apparatus of state, the public administration, secret police, and one-party system seemed like relics of the Cold War; the country was at risk of being left behind while the rest of the world entered the modern era.

This is why the circumstances of Bashar al-Assad's ascension to the presidency at the age of only 34 were completely different: where the father had sought continuity; the son now sought change.

But Bashar was inexperienced. Tall, thin, and with a receding chin, he appeared uncertain and youthful; many doubted his ability as a statesman. Originally, it was not Bashar, but his older brother Basil, who had been in line to take over from his father. When Basil was killed in a car crash in 1994, Bashar stepped into his shoes, abandoning his specialty training as an ophthalmologist in London.

Smooth transition from father to son

The transition of power was carefully planned over many years: since 2000, Syria has been ruled by Hafez al-Assad's son Bashar

​​In order to safeguard the long-planned generational change in Syria's presidency, Hafez al-Assad had prepared the transfer of power well in advance.

Before he passed away, he got rid of influential figures within the regime who could have posed a threat to his son. On his death in June 2000, he left behind a leadership that unanimously supported Bashar, thereby ensuring a smooth transition of power from father to son.

Immediately after the announcement of his death, the parliament voted to reduce the minimum age for assumption of the presidency from 40 to 34; a week later, the Baath Party appointed Bashar al-Assad its secretary general, presidential candidate, and commander in chief of the armed forces.

One mother later, Bashar was elected president in a poll that did not meet minimum democratic standards, receiving 97 per cent of the votes cast. On 17 July 2000, Bashar al-Assad was sworn into office and became president of Syria.

For those who had stood by his father down through the years and were still at the helm of power in the country when the young Assad assumed power, Bashar was a welcome consensus candidate. Despite the fact that he was young, he seemed to the old guard to be easy to influence and steer.

According to Peter Harling, Syria expert at the International Crisis Group (ICG), this explains why the 34-year-old had to liberate himself from their influence: "In a system like the one in Syria, power cannot simply be passed from father to son."

Harling goes on to say that in a system like this, the son has to build up his own power base and earn the respect and trust of the elite. "Unlike pre-2003 Iraq, this is no tyrannous state where an all-powerful dictator imposes his will on the country," emphasises Harling, who goes on to say that Syria has a collective decision-making structure in which the president has to demonstrate his leadership skills.

While Bashar al-Assad struggled with his father's legacy within the system, he quickly won the support of the people. As a computer enthusiast, he made the Internet available to the general public and permitted satellite television and privately owned media.

Above all, he showed himself to be a man of the people. Sometimes he and his wife go to the opera, sometimes they take their children to a restaurant. The image being portrayed is not one of a couple looking for exaggerated, staged photo opportunities, but one of a model Syrian family going about its business. This is how the Assads appear in public, says Janbulat Shakai, political editor of the Syrian daily, Al Watan.

"Every few weeks, Bashar al-Assad pays a surprise visit to somewhere in Syria," he says. Turning to the changed role of Syria's first lady, he continues: "The Syrian people only saw the face of Hafez al-Assad's wife on one occasion, namely on a state visit to the Soviet Union."

A public figure and a women who works actively to combat poverty: Asma al-Assad, the president's wife

​​Bashar al-Assad's wife, on the other hand, is one of the most prominent people in the country. Asma Al-Assad, a former investment banker who was raised in London and completed her studies there, works actively to combat poverty and promotes rural development and the role of women in Syria.

A sophisticated woman, the 34-year-old mother of three feels at home on the international stage and embodies the generational change at the top of the Syrian state more clearly than any other.

According to Syria expert Peter Harling, the presidency of Bashar al-Assad has also resulted in a new style of government. In terms of the way he deals with people and talks to them, Bashar is completely different from his father.

"He is considerate, a good listener, answers questions assiduously, and is very convincing on a number of topics," says Harling. According to the ICG representative, while Hafez al-Assad always talked down to foreigners and answered their questions with meandering lectures on history and its effects on the present day, it is possible to conduct a structured conversation with Bashar al-Assad.

He also adds that in his experience, this manner of communication has spread throughout the system and is now practiced by most official representatives.

Changes on the domestic front, however, are rare. While Bashar al-Assad has established himself as a young, open president, the ultra-powerful secret services are still silencing his critics behind the scenes.

According to Kristin Helberg, the state of emergency imposed in 1963 remains in place in Syria, overruling regular laws and resulting in arbitrary legal decisions and political persecution

​​The Baath Party still rules the country; the state of emergency imposed in 1963 remains in place, overruling regular laws and resulting in arbitrary legal decisions and political persecution.

According to Peter Harling, however, Bashar al-Assad is indeed in a position to change things because the era of the old guard has ended. "In recent times, the president has shown that he is in control; he has made a number of clear decisions that go against the will of the council and against the interests of other high-ranking decision-makers within the apparatus of power."

Harling goes on to say that Bashar al-Assad has introduced a new generation of government representatives and has filled posts within the regime with people he can trust and who share his views.

Assad now needs these people urgently in order to push through overdue economic and social reforms. In recent years, he has above all managed crises and resisted pressure from abroad, adds the Middle East expert.

Now, however, Bashar must call to mind the reason he stood for the presidency in the year 2000, namely to modernise Syria. According to Harling, this will be the real test of the young Syrian president's leadership skills.

Kristin Helberg has been living and working in Damascus as a freelance correspondent for a number of German and English media since 2001.

END_OF_DOCUMENT_TOKEN_TO_BE_REPLACED
Social media
and networks
Subscribe to our
newsletter