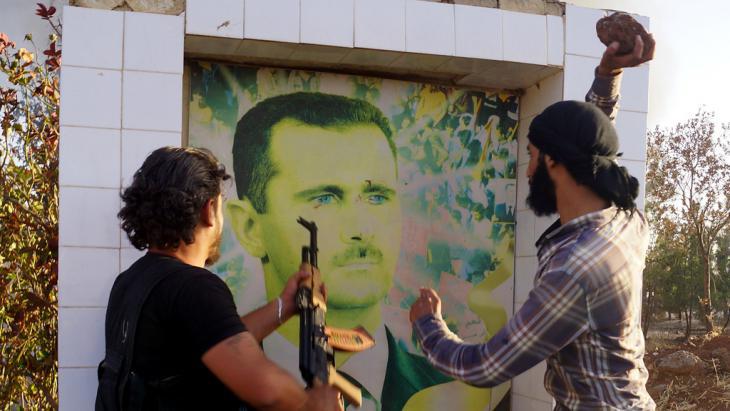 Over the past four years, Assad has razed Syria to the ground. According to Lebanese intellectual Elias Khoury, Assad's regime has reached the end of the line, and the region finds itself in a situation similar to that at the end of the Ottoman Empire

In the early days of the Syrian revolution, when, after the overthrow of Ben Ali in Tunisia and Mubarak in Egypt, optimism still prevailed, people believed that the peaceful popular uprising against Assad in Syria would also ultimately win the day, despite all the repression. We all thought the Damascus Spring was right around the corner. Soon there would be a mass freedom party on Damascus's Merdje Square or Abbasiyin Square, the regime would fold, and councils of young revolutionaries would lay the groundwork for a new, freedom-loving political system.

But after long months during which many lives were sacrificed, we were forced to realise that the regime had eliminated the state. The number of prisoners grew immeasurably, and more and more weapons started appearing at demonstrations. We had a premonition that the overthrow of this regime would be more akin to a funeral than a celebration, and instead of flocking to Merdje Square, we would first have to go to Homs, the capital of the revolution, to dry our tears and bow down before the soil that had soaked up the blood of so many martyrs.

But the criminal imagination knows no bounds. Instead of the regime or factions thereof seeking a settlement in order to save Syria from utter destruction, Assad deployed chemical weapons and barrel bombs, thus making it clear that the only prospect ahead was even more bloodshed and demonstrating that the regime consisted of a clique of thieves, murderers and slaughterers. At the same time, Syria became a playground for dark elements from all over the world.

The regime crushed the co-ordination councils, the fundamentalists dashed any hope of a new, patriotic army, and the opposition leaders wore themselves out, because they were inept and cowardly and because they let themselves be seduced by black gold and a still blacker Wahhabi ideology.

Meanwhile, the tyrannical regime turned to its mullah allies in Iran for help. And thus did a revolution for freedom deteriorate into a brutal religious war. Today, the regime is tottering, having used up all its reserves and alienated all its allies. It will finally collapse when all these things come together: pain, destruction and the need of a miracle to wrest Syria out of the hands of the regional and global powers that have pounced on the country like ravening dogs. 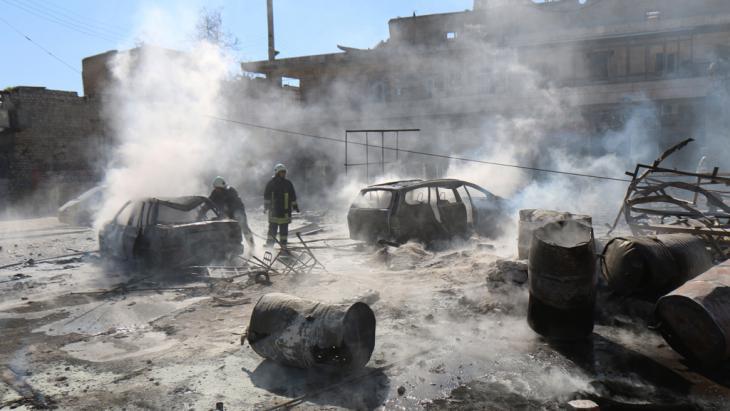 A country torn apart: "Today, the regime is tottering, having used up all its reserves and alienated all its allies. It will finally collapse when all these things come together: pain, destruction and the need of a miracle to wrest Syria out of the hands of the regional and global powers that have pounced on the country like ravening dogs," writes Elias Khoury

"Assad or else we burn down the country!"

The slogans the regime militias came up with in the early days of the uprising were no empty threat: "Assad or no one" or "Assad or else we burn down the country!" They expressed precisely what the tyranny had in store. These were slogans that recalled the final days of Hitler, who was likewise of the opinion that a failure of his Nazi ideology would inevitably spell the shattering defeat of the German people.

Hitler remained uncompromising to the end; his suicide became a symbol of the downfall of Germany and of the German people, because this people did not live up to the delusional fantasies of his Third Reich. This is exactly what Assad Junior has proclaimed since the beginning of the uprising against his tyranny. He took the violence against an unarmed protest to extremes and drove Syrian society to the brink of civil war.

The fact that Assad has managed to burn down Syria is not, however, owing to the genius of his secret service mafia, which has prevailed in Syria for decades, but was also the result of a historical circumstance: the Sunni-Shia divide, which was in turn fuelled by the US invasion of Iraq. The invasion allowed the Sunni Gulf monarchies to invest in Syria and to turn the antithesis between people and regime into a conflict in which all of the regional powers are now involved. On the other hand, the invasion also enabled the regime to withstand all resistance, thanks to support from its Iranian allies and its Lebanese and Iraqi militias.

The clash of civilisations touted by US neo-conservatives as part of their strategy for justifying their barbaric war against Iraq soon proved instead to be a "clash of barbarisms", as the French-Lebanese political scientist Gilbert Achcar put it, even before this barbaric war became a monument to the decline of the era of tyrannical military dictatorships enveloped in nationalist propaganda. Eras usually end in brutality and bloodshed. This is particularly true when they hinge on the conflict between two self-contained fundamentalisms that express a delusional longing for a distant past – a past that rises again over the ruins of towns, villages and the dead bodies of innocent people. 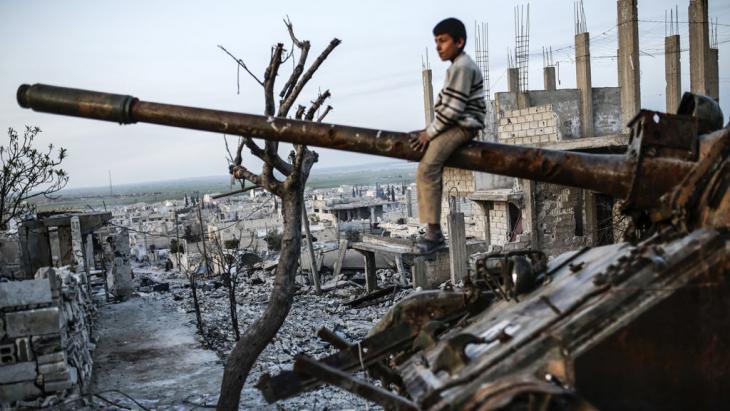 "We live in a time that stops at nothing, one that thrives on religious snippets, and one whose blood lust is insatiable. This is the scenario for the end of the Assad regime, and this is what his mafia has been working towards ever since the Syrian revolt for freedom broke out," writes Elias Khoury

"We live in a time that stops at nothing"

The end of the tyrannical military state bears all the hallmarks of the end of an era: violence, destruction, displacement and madness. It also brings to mind the end of the Ottoman Empire.

Historians have long studied the failure of the King Faisal Project in Syria, which they designated as a colonial conspiracy. But they forgot, whether intentionally or unintentionally, the enormous tragedies that our countries suffered during the dying days of the Ottoman Empire: from locusts to the famine that cost Lebanon a third of its population and drove another third to flee the country, and not forgetting the genocide perpetrated on the Armenians and the Assyrians. Our world was marked by blood and corpses before the British and French "liberators" came in order to divide it up among themselves, and before the Palestinians were butchered in their shadow.

Today, we once again find ourselves in a phase like that of the downfall of the Ottoman Empire. Assad's nationalist military tyranny is at the end of its powers, but it refuses to cede the stage without first destroying everything in its wake and handing over the country it used to rule to forces that are as barbaric and brutal as itself, and which in their ideology yearn – just as Assad's military tyranny does – for a "rebirth" (Arabic: Baath) of the past, even if this revival is understood in purely religious and sectarian terms.

We live in a time that stops at nothing, one that thrives on religious snippets, and one whose blood lust is insatiable. This is the scenario for the end of the Assad regime, and this is what his mafia has been working towards ever since the Syrian revolt for freedom broke out. 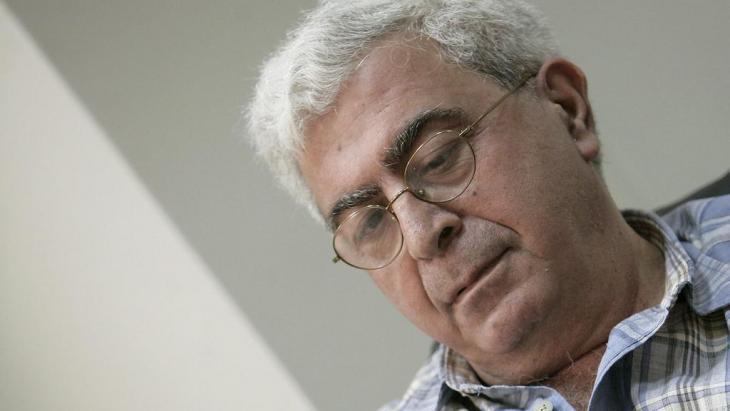 Elias Khoury is one of the most highly acclaimed contemporary Arab intellectuals. He was co-editor of numerous political journals, and for a time the artistic director of the Beirut Theatre. Today he is the senior literary editor of the Beirut newspaper "An-Nahar". Khoury's works also include the book "The Kingdom of Strangers", published in English translation, as well as "Bab al-Shams" (Gate of the Sun), his epic novel about the history of the Palestinians, for which he was awarded the Prize of Palestine in 1998

The shadow cast by the conflict

At the same time, this downfall is casting its dark shadow across the entire region. The best evidence for this was perhaps the speech given by the Secretary-General of Hezbollah, Hassan Nasrallah, in May of this year. It's already sad enough that he gave this speech on the anniversary of the liberation of southern Lebanon in the year 2000.

What a contrast between then and now! While back then, a struggle was waged against invaders, today we are reminded of the Battle of Siffin in the seventh century. Instead of resistance to occupation and domination, we are reverting to religious warfare, and instead of a feast of liberation we have a cult of victims where freedom is sacrificed on the altar of tyranny. Sectarianism cannot make states; it can only destroy nations.

Despite all this, an era is coming to an end, and tyranny will fall – albeit in a slow and beastly manner, and only when there is nothing left of Syria. But the struggle against tyranny will also go on – no matter what the tyrants are called, what slogans they spout and what religious delusion they pursue.

Home
Print
Newsletter
More on this topic
Four years of war in Syria: Where the uprising began and still lives onThe economic impact of the Syrian war: Escaping the Middle East's violence trapPolitical prisoners in Syria: Around-the-clock tortureSyria and the international community: The least we can do for SyriaInterview with Rafik Schami: Defending the Assad kingdom
Related Topics
Arab Spring, Arabellion, Assad regime, Democracy and civil society, Elias Khoury, Hezbollah, History of the Near and Middle East, Human rights, Syrian Civil War, Syrian opposition
All Topics

November 2022 sees the Arab world firmly in the spotlight with the COP27 in Egypt and the FIFA World Cup in Qatar. Public trust in MENA governments is weak, thanks to their ... END_OF_DOCUMENT_TOKEN_TO_BE_REPLACED

"You are not my guide... I am the compass. Iranian women have spoken, freed themselves, and unleashed a revolution despite smelling death. They have cut their braids in anger; ... END_OF_DOCUMENT_TOKEN_TO_BE_REPLACED

In “The Wrong End of the Telescope”, Rabih Alameddine draws us away from the headlines and into the personal story of one individual. Mina is complex, compelling and very real. By ... END_OF_DOCUMENT_TOKEN_TO_BE_REPLACED

How are comic book artists in the Arab world responding to the political situation in the region? Lena Bopp talks to illustrators Lina Ghaibeh and George Khoudry about young ... END_OF_DOCUMENT_TOKEN_TO_BE_REPLACED

The clashes in Baghdad between supporters of Muqtada al-Sadr and pro-Iranian militias show that an intra-Shia power struggle is in full swing. An analysis from Cairo by Karim El- ... END_OF_DOCUMENT_TOKEN_TO_BE_REPLACED
Author:
Elias Khoury
Date:
Mail:
Send via mail

END_OF_DOCUMENT_TOKEN_TO_BE_REPLACED
Social media
and networks
Subscribe to our
newsletter