Skip to main content
The Assassins of Persia and Syria

From the 11th Century to September 11th? 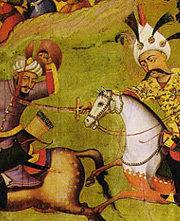 The Assassins caused fear and loathing in the Middle Ages, they were notorious as a gang of under-cover killers – a Satanic secret society

​​Persia in the 11th century was characterised by the rise and fall of Muslim dynasties: Turkic peoples conquered the large cities in the East of Iran and forced the Abassid Caliph of Baghdad to submit to them. The Seljuq sultanate emerged as a new empire, spreading from Central Asia to Syria.

The Muslim world was divided among several centres of power: the Sunni Seljuq Empire in the East, the opposing Caliphate of the Fatimids in Egypt, and Maghreb and Andalus in the West.

This period saw the birth of a radical Shiite sect, the so-called Nizariyya Ismailis under their leader Hassan-i Sabbah – better known as the Assassins. "A sect within a sect" – they are a splinter group of the Shiite Fatimids, who are themselves seen as heretics by orthodox Sunnis.

Fortresses against the Seljuq rulers

In the centre of Seljuq power, in the remote mountain regions of Northern Iran, Hassan-i Sabbah and his supporters built fortresses against the Seljuq rulers. Thomas Scheffler of the Otto Suhr Institute in Berlin says the Ismaili heretics soon became a thorn in the sides of the Seljuq rulers.

"That led to the persecution of the sect," he says, "and they sometimes sent messengers to murder their persecutors. The messengers would worm their way into the court of the political leaders, such as the Seljuq sultans, win the trust of the Caliph, and then stab them to death. They often did not try to flee, so that one can see them as an early version of the suicide attacker."

Assassination became an effective way of ensuring power – the Assassins caused the structure of the Seljuq empire to falter. The killing of high-ranking Muslim officials and regents often led to long wars between those who hoped to succeed them, and thus an interregnum which the Assassin sect could use to secure their power further.

Many myths and legends are told about their leader, Hassan-i Sabbah, who won people to carry out his attacks by promising paradise on earth to his faithful supporters – the so-called fida'is. Those chosen for the task were allegedly drugged with opium and led into a Garden of Eden which had been specially constructed for the purpose.

War against the declared "Enemies of the Imam"

The murder of the Seljuq Grand Vizier Nizam al-Mulk in 1092 was the start of a series of killings of orthodox Sunnis which lasted for decades. The Assassins saw themselves, not as ruthless murderers, heretics or conspirators against Islam, but as elite fighters in the war against the declared "Enemies of the Imam." 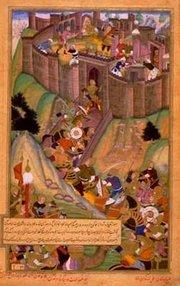 The Assassins lived in remote mountain regions of Northern Iran and built fortresses against the Seljuq rulers, like in Alamut

​​They wanted to build a messianic state according to Shiite principles. The fact that they killed alleged Sunni "oppressors" and "usurpers" only proved the strength of their faith and their loyalty, which would help bring them straight to paradise.

In their cult of martyrdom and sacrifice, many contemporary writers see the Assassins as an early form of modern radical-Islamist movements, from the Palestinian Hamas to the suicide pilots of September 11th . The writer and scholar of Islam, Navid Kermani, thinks the comparison is invalid:

"There is a cult of martyrdom in Islam," he points out, "and within this cult, the Assassins were a special form. However this cult of martyrdom is firmly placed in Shiism, in other words, you do indeed find among the Shiites a willingness to undergo ostentatious suffering or self-sacrifice. This cult of martyrdom emerged in opposition to Sunni Islam. So one can't simply say that there's a clear continuous line here – from the Assassins, who were a decidedly Shiite cult, to the Sunni attackers of today. One is mixing things out of entirely different contexts."

Suicide attacks in the Middle East

If one looks at the history of suicide attacks in the Middle East since the beginning of the eighties, it becomes clear why it is misleading to assume a tradition which links current attacks with those of the Assassins.

On 11th November, 1982, Ahmad Kassir drove a truck into the headquarters of the Israeli occupying troops in the Lebanese city of Tyre: 140 people died.

A few months later, attacks on the US embassy and on US barracks in Lebanon received even more attention. All these attacks were carried out by a radical Shiite terror group attached to Hezbollah, the "party of God." 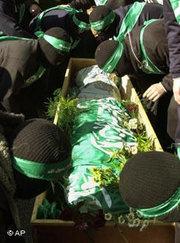 There is no text either from Al Qaeda, Hezbollah or Hamas, in which they try to draw a link in any way whatever to the Assassins

​​It was Hezbollah's aim to liberate Lebanon from foreign occupiers and to found a religious state. It received ideological and material support from the Iranian government. The Shiite clergy under Ayatollah Khomeini had taken power there in 1979 and had set up a theocracy.

Both before and during the revolution, Khomeini had succeeded in mobilising the masses with the cult of the martyr, or Shahid, which was deeply rooted in Shiite Islam. The cult became a matter of existential significance when the war with Iraq broke out in 1982. Thousands of volunteers, many of them children and young people, hurled themselves to their deaths, in the expection that their self-sacrifice would lead them to heaven.

If religous martyrdom was here a mass phenomenon to defend theocracy, in the hands of Hezbollah, it was turned into a carefully aimed weapon in an irregular war against the Israeli occupying power. The Shahid operations of Hezbollah were generally directed at military targets and were deployed infrequently and only after detailed preparation. The suicide attacks were a valuable weapon which was to be deployed with circumspection.

The radical Islamist Palestinian groups like Hamas and Islamic Jihad have an entirely different policy. They took up the suicide attack as a tactic in the nineties and deployed it with increasing lack of restraint: against Israeli soldiers as well as against civilians, in the occupied territories as well as in Israel proper - whenever they could find a potential Shahid.

The suicide terrorism carried out by the international terror network Al Qaeda seems to be carried out even less selectively. Its struggle is not directed against a concrete occupation or repression, but generally against the value system of the West, and especially against the USA.

But can one see a tradition of suicide attacks in political Islam which leads from the Assassins of the 11th century to September 11th? Thomas Scheffler believes not.

"There is no text," he says, "either from Osama bin Laden, or from Al Qaeda, or from Hezbollah, or from Hamas, in which they try to draw a link in any way whatever to the Assassins. It would be opposed to the entire ideology of these groups, because these Assassins were heretics in the view of both orthodox Sunnis and Shiites, with whom one would not wish have anything to do."

Faded myth of the "Old Man of the Mountain"

And Navid Kermani believes that the memories of the "Old Man of the Mountain," who equipped his emissaries with daggers and sent them to martyrdom, have faded away in the Muslim world.

"The Assassins, Hassan-i Sabbah and Mount Alamut – all of these things have practically no relevance any more in the Shiite world of today," he says. "I believe people scarcely know about them any more. I think if one goes to Iran and asks where Alamut is, only a very few people would know the answer because it's simply not part of cultural memory any more."

The Assassins may still have a place in the history of the Middle East as a terror sect surrounded with myths and as spectacular killers. But they have no role as the ideological basis for modern radical Islamism.

The theory of a tradition of Muslim suicide attacks going back to the Middle Ages turns out to be merely another newspaper legend about the world of Islam which is likely to be detrimental to any serious research into the Islamist terror of the present.

END_OF_DOCUMENT_TOKEN_TO_BE_REPLACED
Social media
and networks
Subscribe to our
newsletter