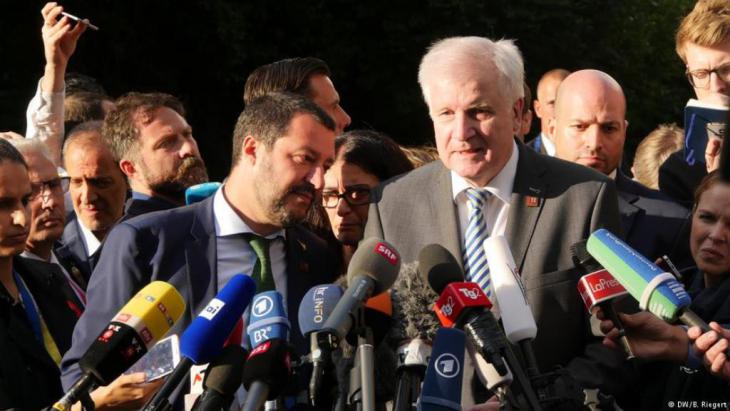 The axis of the right
Europeʹs new isolationist front

Europe is shifting to the right. Border security and isolation increasingly dominate the migration policies of the European Union. At a national level, right-wing parties are peddling a symbolic identity policy to distract from cuts that undermine the very fabric of society, says political scientist Farid Hafez

Whereas in the past, most European right-wing parties were confined to the benches of the opposition, several of these groups now hold the reins of power. One of their chief goals is to alter the character of the European Union: work on consolidating Fortress Europe should continue. At the same time, these right-wing populists are engaged in neo-conservative restructuring at a national level, deploying identity politics as a useful smokescreen.

Since the start of this year, Austria's right-wing populist Freedom Party (FPO) in a governing coalition with the Christian democrat People's Party (OVP) has been showing how it plans to turn the state inside out. The social safety net and education system are being undermined (for example, with cuts to minimum benefits and unemployment benefits) and labour rights curtailed. Companies, on the other hand, are benefitting from a reduction in corporate tax.

Staging a distraction with identity politics

Deploying symbolic identity politics, the government is attempting to distract the electorate from these socially unjust measures. The former not only include a planned headscarf ban in kindergartens and primary schools. A theatrically-staged media conference celebrating the closure of mosques as a blow to political Islam also falls into this category. 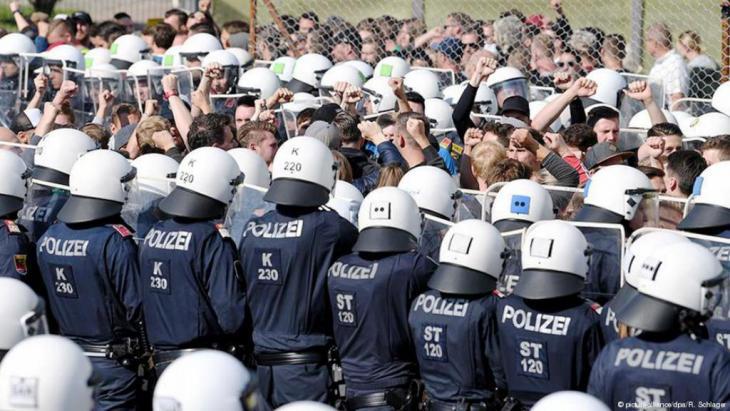 Turn back now: deploying 500 police officers and 200 soldiers, Austria's right-wing conservative government has demonstrated its determination to reject refugees at the border. The image shows a corresponding exercise held at the Austrian-Slovenian border crossing in Spielfeld on 26 June 2018

Furthermore, the decision taken in July to abolish the Turkish-language driving test because the costs were purportedly too high should also be viewed in the light of this strategy. These are just a few examples of announcements made in the last six months, with the hope that they will serve as a diversionary tactic.


A tactic that's not only in evidence in Austria. In Bavaria, CSU State Premier Markus Soder introduced a regulation, which came into force in June 2018, stipulating that all public administration buildings must display a crucifix as "an expression of the historic and cultural character of Bavaria".

In Italy, the right-wing populist Lega followed suit and introduced a draft bill stipulating the display of crucifixes in public buildings such as train stations and airports. Any infringement can be penalised with a fine of up to 1,000 euros. As the Italian ruling party said, Italy cannot do without "symbols of our history, culture and tradition".

Home
Print
Newsletter
More on this topic
Refugee crisis in Europe: The price of European indifferenceMigration and human rights: Refugee versus migrant: what's in a name?Migrating across the Mediterranean: Escape at all costs
Related Topics
AfD | Alternative for Germany, European Union (EU), Front National, Immigration, Migration, Migration in Germany, Policy on refugees and migration, Right-wing populism, Xenophobia
All Topics

Even in times of war and pandemic, refugees are still being deported to Afghanistan. Several deportation flights have taken place in recent weeks alone. Since those affected often ... END_OF_DOCUMENT_TOKEN_TO_BE_REPLACED

On 7 March, Switzerland became the latest European country to vote in favour of a so-called "burka" ban. It was yet another feather in the cap of the right-wing populist Swiss ... END_OF_DOCUMENT_TOKEN_TO_BE_REPLACED

What drives young men into the arms of Islamist extremists – and how can they be re-integrated into society? Five years after the deadly attacks in Paris, urgent questions remain ... END_OF_DOCUMENT_TOKEN_TO_BE_REPLACED

Austria's chancellor is seeking to criminalise "political Islam". The move would put non-violent, non-radical Muslims under blanket suspicion and is hardly helpful in the fight ... END_OF_DOCUMENT_TOKEN_TO_BE_REPLACED

Rather than suspecting Muslims in general, we need to co-operate more with Islamic scholars, Muslim congregations and associations, writes Muhammad Sameer Murtaza in his ... END_OF_DOCUMENT_TOKEN_TO_BE_REPLACED

END_OF_DOCUMENT_TOKEN_TO_BE_REPLACED
Social media
and networks
Subscribe to our
newsletter