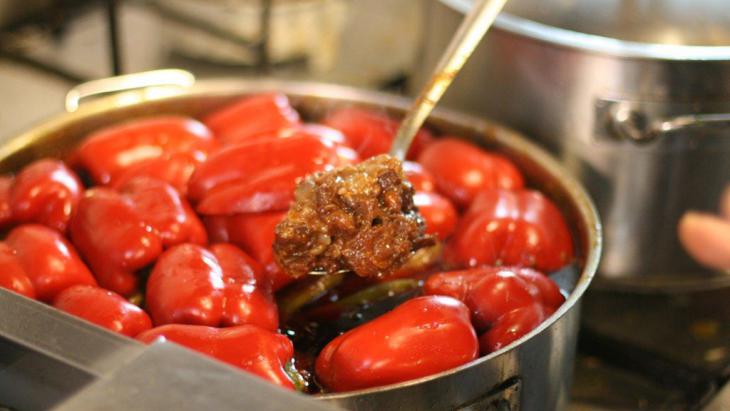 The ″Azura″ restaurant in Jerusalem
Cooking between the extremes

In the midst of the ongoing Middle East conflict, there are many places where Jews and Palestinians have worked together peacefully for years. At the restaurant "Azura", for example. Daniella Cheslow reports from West Jerusalem

Moshe Shrefler runs "Azura" together with his three brothers and his father, Ezra, who emigrated to Israel from the Turkish city of Diyarbakir in 1939. For more than half a century, people have been flocking to their restaurant at the Mahane Yehuda Market in West Jerusalem to relish hearty meat stews that have been simmering for hours over the kerosene stove.

Half of the 30 employees are Palestinian: cooks, cleaning staff and dishwashers who all live in the eastern part of the city. The other half are Israeli waiters. "My Palestinian employees come here to make money," says Shrefler. "They have been working for me for years and I trust them. Naturally, one of them might end up going off the rails, but what can I do about that? I have a business to run!"

Since the beginning of last month, Palestinians have killed seven Israelis in shootings, stabbings and attacks with cars. At least 31 Palestinians – including the attackers – were killed in clashes with the Israeli security forces. A renewed wave of violence has shaken Jerusalem. Israel has deployed hundreds of extra police officers, and the army has set up checkpoints in many East Jerusalem neighbourhoods.

Israelis and Palestinians – united by work

One day, "Azura" was suddenly deserted. Shrefler took six dishes off the menu and made 80 percent less turnover than usual. "I'll just close at four o'clock and go home," said the 39-year-old. "I don't like this atmosphere." 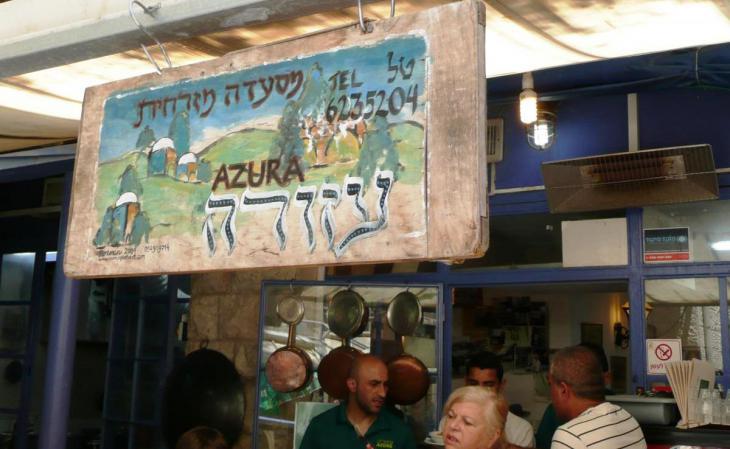 Established culinary attraction: Moshe Shrefler runs "Azura" together with his three brothers and his father, Ezra, who immigrated to Israel from the Turkish city of Diyarbakir in 1939. For more than half a century, people have been flocking to their restaurant at the Mahane Yehuda Market in West Jerusalem

Mosab Almator, the veteran chef at "Azura", is Palestinian. He says he tries to ignore the news as much as possible. Almator lives in the Shuafat refugee camp and has worked for Moshe Shrefler for 15 years. He starts work at 6 o'clock in the morning, working side-by-side with his boss to prepare dishes such as beans with rice, beef lung and Kurdish dumplings. "It's true, there's a war going on out there," he says. "But at work we are brothers."

Dishwasher Rami Frukh remarks that the pay at "Azura" is better than at most Palestinian restaurants. He got a taste of the volatile atmosphere currently prevailing in the city when he was recently stopped by the police three times on his way to work. Frukh lives in Wadi al-Joz, a neighbourhood near Jerusalem's Old Town. "They detained me for half an hour and searched me for knives," he says.

Inequality between East and West

Two-thirds of Jerusalem's 850,000 residents are Jewish Israelis. The rest are Christians and Muslim Palestinians living in East Jerusalem. Israel conquered this part of the city during the Six Day War in 1967. Most people here do not have Israeli citizenship and do not vote in elections in Jerusalem. But they do pay municipal taxes, hold the so-called Jerusalem ID and have a right of residence, and they have access to health care, insurance benefits and the school system. For decades, the Palestinians have complained of unequal treatment, for example in terms of education and infrastructure. The poverty rate in East Jerusalem is more than 70 percent.

The inequality between East and West Jerusalem forces people to work together. According to the daily paper "Haaretz", half of the Palestinians who live in East Jerusalem and have a job work in the western part of the city or in other cities in Israel. They form the lion's share of the city's hotel staff, construction workers, and bus and train drivers. "Blocking off East Jerusalem would plunge the entire city into an immediate and severe economic crisis," says Nir Hasson, Jerusalem correspondent for "Haaretz".

Caught up between mistrust and understanding 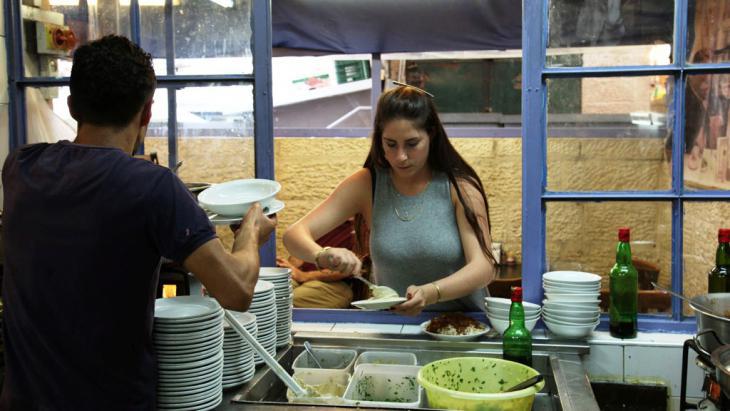 Showing understanding for the situation of the "others": Natalie Geva, a waitress at "Azura", spends a great deal of time with the Palestinian cook Mosab Almator. Through their frequent conversations, she learns about the lives and everyday problems of the Palestinian population in the occupied territories

The recent climate of violence in Jerusalem has had a noticeable impact on the people here. Natalie Geva, a waitress at "Azura", says that on her way to work during the past few weeks she kept looking behind her. Out of fear. Surrounded by her colleagues, though, she feels at ease. Through her work at "Azura" and her conversations with Almator the cook, she has learnt more about the lives of the Palestinians. "I know what his life is like and that he wants his children to get a good education," she says. "He works really hard for it. I know that life for the Palestinians is very difficult."

The food at "Azura" is so good that the Israeli emigre Barbara Arama always stops by when she's visiting from Florida. "I don't think about whether one of the Palestinian cooks might have spat in my food," says the 72-year-old. "I just eat and enjoy. If I started thinking like that, I couldn't eat in most restaurants, because almost exclusively Palestinians work there."

While Arama chats with her husband, the dishwasher Omar Abu Sbitan passes by to take his lunch break. During lunch, he checks his mobile phone for the latest news. He says he can understand why Palestinians would attack the Israelis. "I support them. Without them, we will never liberate our homeland," says Abu Sbitan, who lives on the Mount of Olives, near the Old Town. "Inshallah, I will one day join them." But his statement has a hollow ring to it because he goes on to say that he is training as a chef. "I'm happy here," says Abu Sbitan. "My boss is a good man." 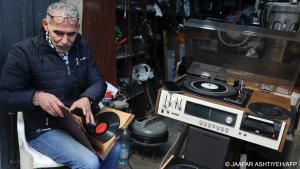 From Jamal Hemmou's ramshackle workshop in Nablus's Old City in the occupied West Bank, classic Arabic songs blare into the surrounding cobbled streets. For how much longer ... END_OF_DOCUMENT_TOKEN_TO_BE_REPLACED

Asmaa al-Atawna's debut novel "Missing Picture" has been published in German translation (Keine Luft zum Atmen – Mein Weg in die Freiheit). In it, she describes life in Gaza from ... END_OF_DOCUMENT_TOKEN_TO_BE_REPLACED

At the end of every year, the team at Qantara.de gives you a run-down of the ten most-read articles on the site over the past 12 months. Here is a quick overview of the stories ... END_OF_DOCUMENT_TOKEN_TO_BE_REPLACED

END_OF_DOCUMENT_TOKEN_TO_BE_REPLACED
Social media
and networks
Subscribe to our
newsletter