Both Symbolic and Important

The call for an arrest warrant against Sudanese President Omar al-Bashir may just be a symbolic move, but Bashir and his cronies will still have to react to the genocide charges, says Stefanie Duckstein 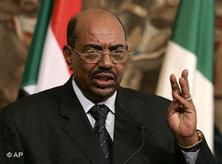 ​​The chief prosecutor of the International Criminal Court, Luis Moreno-Ocampo, has brought out the heavy guns in asking the court for an arrest warrant for Sudanese President Omar Hassan al-Bashir. His reason: The campaign of genocide in the Darfur region. In addition, Ocampo cited evidence that the president is guilty of 10 counts of war crimes and crimes against humanity.

It's a brave step for Ocampo, but one that will likely not put the government in Khartoum under as much pressure as one would wish. Despite this, it is a symbolic and long-overdue move. Up to now, the position of the international community has been rather cloudy. The bloody massacre of the Sudanese people has made for shocking headlines for years now, but clearly not shocking enough to take any action with consequences.

Any past attempts to put a stop to the murder in Darfur have ended in failure, and any political solutions to the crisis have been blatantly ignored by Bashir. The United Nations couldn't bring it upon itself to impose economic sanctions. And military measures? A farce. The Chinese are flouting a weapons embargo and diligently delivering ammunition, equipment and training for Sudanese soldiers. 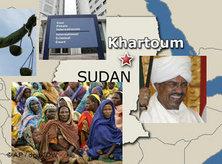 Why is this man smiling? - The United Nations estimates that the conflict has left as many as 400,000 dead from violence and disease

​​UN General Secretary Ban Ki-Moon had to practically beg troop donor nations for the joint peace mission made up of soldiers from the UN and the African Union, with the result that today, not even a third of the planned 26,000 soldiers have actually arrived in Darfur. Making matters worse - the UN troops have no mandate to disarm the black African rebels or the Janjaweed militia. So far, there have been nothing but helpless attempts to bring an end to the crisis, now in its fifth year.

Ocampo's offensive is all the more remarkable, because for the first time in its 10 year history, the ICC has charged a sitting head of state. It shows that top-ranking politicians - even national leaders - are not immune to criminal proceedings when they are guilty of human rights violations.

But two previous arrest warrants show how much bite - or rather, how little bite - the charges against Bashir will have. The ICC has already brought charges against two alleged Sudanese war criminals, but the long arm of international criminal law isn't long enough. Khartoum refused to extradite the men and even appointed one of the accused, Ahmad Harun, minister for humanitarian affairs. A slap in the face for anyone with a sense of justice.

This push from The Hague, then, is unlikely to result in any more security for the people of Darfur. Sudan refuses to recognize the ICC, and Bashir can continue to count on the support of his friends. The African Union has already warned of the risk associated with putting the Sudanese leader on trial. And the Chinese will not want to forgo their continuing lucrative business with Sudan.

China's Involvement in Sudan
Criticism of the Red Giant
While the governments of China and Sudan have been celebrating record levels of trade, there's increasing unhappiness among the people of Sudan about China's role in the country. Human rights activists criticise China's behaviour in the Darfur conflict and elsewhere. By Marc Engelhardt

The Tragedy of Darfur
Double Standards Being Applied
Why is it that - in contrast to the attention given to the Middle East conflicts - Arab media and politicians are largely ignoring events in Darfur? Moataz El Fegiery and Ridwan Ziyada look for answers

END_OF_DOCUMENT_TOKEN_TO_BE_REPLACED
Social media
and networks
Subscribe to our
newsletter