The Bedouin Jerry Can Band
Preserving the Bedouin Heritage

The sounds of the major ethnic group of Saharan nomads remains relatively unknown in the West. Now for the first time Bedouin musicians from the Sinai Peninsula are taking their music out across the Egyptian borders. Stefan Franzen caught up with the Bedouin Jerry Can Band at a gig in Marseilles

The major ethnic group of Saharan nomads remains relatively unknown in the West. Now for the first time Bedouin musicians from the Sinai Peninsula are taking their music out across the Egyptian borders. Stefan Franzen caught up with the Bedouin Jerry Can Band at a gig in Marseilles

The Bedouin Jerry Can Band from the Sinai

​​They come from very different parts of Sinai. Some are from the coastal town of El-Arish, the others from the settlement of Abo El Hossain. They were brought together by Egyptian Zakaria Ibrahim who with his El Mastaba organisation is involved in working for the preservation of many of the threatened traditions in the area between Sinai and Sudan.

"Back home these musicians play at weddings and other special occasions, but I formed the band to make Bedouin culture internationally known," says Ibrahim. "I see Egyptian music becoming more and more westernised and I would like to preserve a broad spectrum of our heritage."

He quickly dispels any notion that he is simply trying to create a new hype for desert music by hitching on to the success of the Tuareg bands. Indeed, while the blue knights of the desert are busy adapting their electric guitar sound to suit Western ears, the Bedouin are determined to remain true to their own traditions. All the instruments are acoustic and their being brought together in an ensemble is itself a novel move.

A magroona shawm, ney flute and wolfskin fiddle are all here, along with the bubbling, driving rhythm of the smallest version of pharaonic harp. The name of the instrument, Simsimiya, is derived from "simsim", the Arabic word for sesame seed – because of its smallness.

The percussion section has become, in rather a bizarre way, beneficiary of the Sinai Peninsula’s political difficulties. "Whenever something is found that might be useful as an instrument the Bedouins will give it a try out," says Mehdat El Issawy, creative leader of the group. 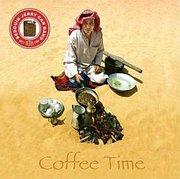 Cover of the Jerry Can Band's most recent album, "Coffee Time"

​​"The jerry cans were left behind, lying in the dunes, after the end of the Israeli occupation. We discovered that each one had a different tone, depending on age, size and dents – put together with the old ammunition boxes they creat a great sound!"

Their songs are all traditional: they are about unfulfilled and forbidden love, the atmosphere on a full moon night in the desert, or the proper way to enjoy coffee. Clearly, in their drinking culture too, they like to be differentiated from the Tuareg. Tea is seen as a relatively new fashion, but in Sinai it is the dark brew from Yemen that is most highly prized.

Coffee, black and strong, ground with a mortar in classic Bedouin fashion. Latte macchiato and cappuccino don't really do it for the Bedouin as the title track informs us. Coffee, El Issawy explains, belongs to both weddings and funerals. "If the deceased was an elderly person one may add sugar, in the case of a young man the coffee will be left bitter to signify the greater grief."

There is a real Arabian Nights enchantment to a show by the Bedouin Jerry Can Band: a tent hung with lamps, and feel-good dancing to the swaying accompaniment of colourful camel driving sticks. But there is a nostalgic tinge to it all also as the nomadic lifestyle is under threat due to economic pressures on the homeland. Singer Goma Ghanaeim reflects:

"We are happiest when we are living close to the sand, that is our element. The Koran, after all, says that Adam was created from sand. Even though there are lots of modern influences in our lives: stone buildings, refrigerators, we still prefer cooking over an open fire to going to a restaurant."

Can the Bedouin culture survive in a globalised Arab world? The group’s international success has certainly brought a renewed sense of pride in Sinai’s heritage. El Issawy has a modest wish for the future:

"Sinai is like a crossroads. People come here from Morocco on their way to Al-Quds (Jerusalem), or from Palestine, travelling through on pilgrimages. And what about us? Most people from our tribes who live in Sinai don’t even have passports. We would like to see them have the opportunity to move freely in the world."

The "Babel Med Music" World Music Forum
A Program Filled with Diversity
The "Babel Med Music" world music forum is a symbol of the rapid transformation of Marseilles. The port city has long been regarded as something of a street urchin. Now it is being upgraded to a cultural metropolis of the Mediterranean region within the framework of the Euro-Mediterranean Partnership. David Siebert reports

Comments for this article: Preserving the Bedouin Heritage

Very good and useful for a great amount of work super site and be the best!!!

END_OF_DOCUMENT_TOKEN_TO_BE_REPLACED
Social media
and networks
Subscribe to our
newsletter