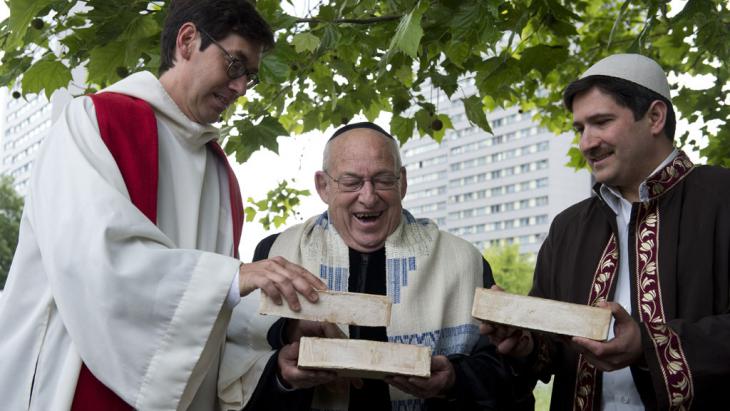 The Berlin Project "House of One"
Three religions under one roof

Berlin is set to host Germany's first ever house of worship to unite synagogue, church and mosque. With the "House of One" project, Jews, Christians and Muslims aim to send out a signal of tolerance from Berlin's historic centre. Jannis Hagmann on the ambitious and refreshingly pragmatic project

The pub on the edge of the site serves blood sausage with fried potatoes, the words "Iron Union" have been daubed on a nearby house wall, and a faint smell of exhaust fumes wafts over from the six-lane Gertraudenstrasse. You might imagine a place of tranquillity, retreat and prayer to look rather different. But pastor Gregor Hohberg, imam Kadir Sanci and rabbi Andreas Nachama are still some way from realising their vision – five years and more than 40 million euros to be exact.

Kair Sanci thinks these numbers are incidental. For the imam, the "House of One" exists already, even if it has not yet been built. "The journey is the reward," he says optimistically. In the place where a sacred building for Jews, Christians and Muslims will one day tower skywards, he and his colleagues, the rabbi and the pastor, preach from a small improvised stage.

United under one roof

They've brought prayer books and a candle; a keyboard player strikes up a hymn. The three didn't expect many worshippers to attend their peace service called due to the refugee crisis, but the 25 chairs they've set out have filled up nicely.

The "House of One" is an ambitious and thoroughly bold project. It would not only be Germany's first sacred building to bring church, mosque and synagogue together under one roof. The site itself also has symbolic resonance. What isn't immediately obvious from the rather desolate plot of land is that Petriplatz, a place few Berliners these days know anything about, is the historic heart of the capital. It formed the centre of what used to be the double city of Berlin-Colln. 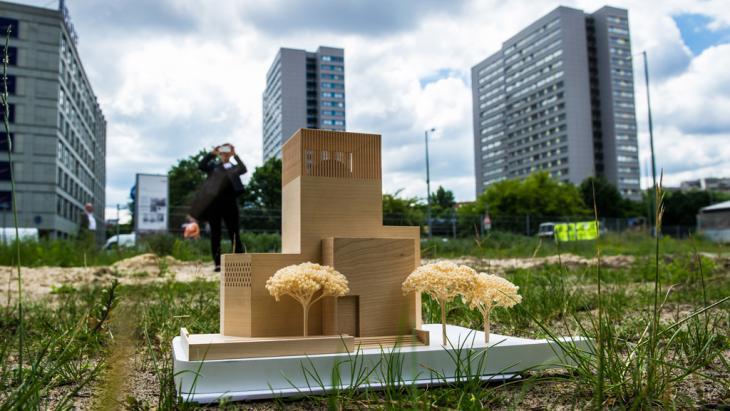 Three monotheistic religions under one roof: a model of "House of One" in Berlin. The cubic design foresees a three-stage building. The concept is the work of the Berlin architect firm Kuhn Malvezzi, which took first prize in an architecture competition three years ago. The site marks the historic centre of Berlin – the remains of which have been thoroughly excavated and documented in recent years. The city intends to exhibit the finds in an archaeological centre next to the ″prayer and education centre″

There used to be a majestic church here, the Church of St. Peter or Petrikirche; badly damaged during the war, it was torn down by the East German authorities in 1964. This robbed Petriplatz of its last historic monument and condemned it to a slumber of insignificance lasting decades. The multi-religious "House of One" on Petriplatz would be a history-conscious show of hands by the faithful in the reunified, largely secular and socially diverse German capital.

The plans to finance the "House of One" are also ambitious. The initiators are proud of the fact that this is not a political prestige project, but a grassroots endeavour. Construction costs are to be raised through crowd-funding. And these are considerable: the project needs 43.5 million euros. The donation campaign has been running since last year. But things don't look good: The current amount of money raised is one million euros, with more than 800,000 of those pledged by the Bundestag, which will only pay out once the foundation stone has been laid.

Building work will begin once 10 million euros have been collected. But this still remains a distant prospect. Sanci is nevertheless confident: "We have momentum in Berlin," he says. The diversity of the city and the many people keen to engage in dialogue are the perfect conditions for the "House of One", he adds.

House without a master

At the vicarage of the parish of St. Peter and St. Mary, just a few metres away from the building site, the bikes are now being stored in the entrance hall. What used to be the bicycle room has been refurbished and now serves as an office for the few staff of the "House of One".

The protestant parish is one of the partners in the project's founding association. The Jews are represented by the liberal Jewish Community in Berlin and the Muslims by a rather unusual representative: in Kadir Sanci, Islam is not represented by a mosque community or one of the big associations, but by a graduate of theology who has a doctorate from the University of Potsdam and who is a member of the small Berlin initiative – the Forum for Intercultural Dialogue.

These are not big names. But Sanci is keen to stress that there is considerable support within each of the communities. "I've not heard any institutional criticism from the Muslim side, only individual critical voices," he says. It is not yet certain whether and how the major Islam associations will take part. Sanci says he is conducting talks with Aiman Mazyek from the Central Council of Muslims in Germany. "Mazyek is in favour of the project and believes it to be a good thing,” says Sanci. But he is not yet in a position to say what form the Central Council's involvement will take.

Imam Sanci views his dialogue work with Jews and Christians as a religious duty: "It's no industrial accident, but the will of God that we are different," says Sanci. "Muslims understand God as the almighty and this almighty would have been capable of creating us as uniform." 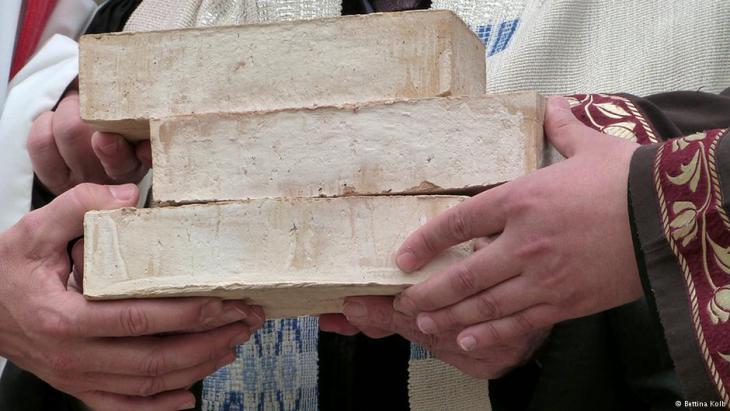 Bricks for the three faith centre: over a million euros have already been donated to build the place of worship for Jews, Christians and Muslims in Berlin. Over 1,400 individuals have already contributed, as the "The House of One” association shows on its website. The total cost of the project is 43 million euros. Construction work will start as soon as donations reach the 10 million mark

For that reason it is no problem for him that others espouse different views on a theological level. At the "House of One" association, all religions carry the same weight. "The concept of equality is key," explains Sanci. "There have been many examples in Islamic history where different religions have worshipped under one roof. But in line with the zeitgeist of the moment, no one is master of the house, we all shape things together."

But nevertheless, this does not include all religious denominations. Shias and Catholics are not involved thus far, which is probably owing to the pragmatism of the project. Sanci insists there is no intention to exclude them. "The house is open to all. We won't send Shias and Catholics away because they're Shias or Catholics. If a Shia group wants to hold Friday prayers in the mosque, that's possible. Catholics can also hold mass," he says.

The parity concept is also reflected in the architecture of the house of worship. The models submitted by architects for the competition are still displayed on a shelf at the vicarage. Almost all the models are a structural realisation of the number three. Three building complexes, three towers, three corners. Mostly, the church, synagogue and mosque are of equal height. None of the religions should assume a particular role.

The contest was eventually won by a Berlin architectural office with a streamlined modern building that will be clearly distinct from the classicism and East German architecture in the direct vicinity. The fact that of all the three parts of the winning design, it is the section designated for the mosque that is taller than the synagogue and the church, takes into account the constant squabbling over the height of church spires and minarets, and speaks for the relaxed way the members of the "House of One" are approaching their project.

"There will only be one shared entrance," explains Ulla Albrecht-Kraß from the parish responsible for the "House of One" public relations campaign. "Church, synagogue and mosque can only be reached via a shared common room." From this room, three doors will lead to the individual houses of worship.

But at the same time – and this is an important point for all those involved – nothing should be mixed. Each religion has its own space. "We don't want to give rise to a new religion, a unity religion," emphasises Sanci. "We aim to uphold tradition."

Giessen, Eichsfeld, Kusel, Berlin – cars bearing old German number plates are the latest trend on the streets of Cairo. Many Egyptians regard the discarded plates as chic. What ... END_OF_DOCUMENT_TOKEN_TO_BE_REPLACED

Tunisia has been going through a severe economic and political crisis in recent years. More than one in three young people there are unemployed. For many skilled, qualified and ... END_OF_DOCUMENT_TOKEN_TO_BE_REPLACED

German imams have publicly expressed their solidarity with the women of Afghanistan. In a letter of protest, the clerics say that the Taliban regime's decree barring women from ... END_OF_DOCUMENT_TOKEN_TO_BE_REPLACED

At the end of every year, the team at Qantara.de gives you a run-down of the ten most-read articles on the site over the past 12 months. Here is a quick overview of the stories ... END_OF_DOCUMENT_TOKEN_TO_BE_REPLACED

Social engagement is often motivated by religious factors. A new book explores the background to these community efforts and appraises how effective they are in helping to ... END_OF_DOCUMENT_TOKEN_TO_BE_REPLACED

The government in the Netherlands, one of the last European nations to abolish slavery, has made an historic apology. But some feel that there is still a long way to go. By Ella ... END_OF_DOCUMENT_TOKEN_TO_BE_REPLACED
Author:
Jannis Hagmann
Date:
Mail:
Send via mail

END_OF_DOCUMENT_TOKEN_TO_BE_REPLACED
Social media
and networks
Subscribe to our
newsletter