The BJP pretends that this is a neutral exercise, emphasising that the Supreme Court supervised the process, even as it celebrates the identification of "foreigners". But the move is anything but unbiased, as it will determine who can own land, hold jobs and vote in BJP-ruled Assam. And whatever the size of the final NRC – there is still time to appeal its findings and correct some errors – it is already clear that those ultimately excluded will be overwhelmingly, if not entirely, Bengali Muslims.

In fact, it has been suggested that a principal purpose of reviving the NRC process has been to strip as many Bengali Muslims as possible of the right to vote ahead of the next general election. In a state of some 30 million, disenfranchising four million people could have a major impact on the BJPʹs electoral fortunes, as it has scant support among Indiaʹs Muslims. But it is almost impossible to tell a Bangladeshi Muslim and an Indian Bengali Muslim apart. Also, the legal implications of the move to strip so many inhabitants of their voting rights have yet to be assessed and court challenges await.

In any case, the Bengali Muslims excluded from the NRC stand to lose more than their voting rights. Some speak glibly of deporting them to Bangladesh. But there is no bilateral deportation agreement in place and Bangladesh has made clear that it assumes no responsibility for people who are not on its territory. The last thing India needs is to create a migration crisis or, worse, try to force deportations to Bangladesh – one of the few neighbours with which the BJP government has managed to maintain good relations. 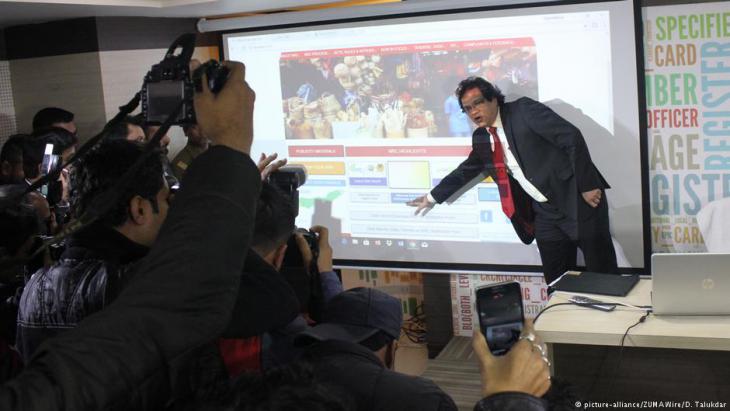 Potential for widespread social unrest: "So far, the crisis created by the NRC has been non-violent. But as tensions mount, the risk of an eruption is growing. Can Indiaʹs democracy afford to disregard the human rights of people who have been living on its territory for decades?" asks Tharoor

Still, it seems possible that those who are excluded from the NRC will be driven from their homes in Assam – which they may have inhabited for more than four decades – with no place to go. Some have suggested that India establish camps to house these people until they can return to Bangladesh – a prospect that horrifies human-rights groups, not least because there is no guarantee that that day will ever come. More fundamentally, is it really justifiable to strip people of the rights they have exercised in democratic India for most of their lives?

So far, the crisis created by the NRC has been non-violent. But as tensions mount, the risk of an eruption is growing. Now, the government must confront difficult questions. Is an accord reached in 1985 to address actions taken since 1971 really the best framework to resolve the issue in 2018? Can Indiaʹs democracy afford to disregard the human rights of people who have been living on its territory for decades? As laudable as it is to protect Indiaʹs sovereignty and the integrity of its citizenship, does it justify throwing millions of lives into limbo?

There are no clear answers to these questions, despite what passionate voices on both sides of the argument would have one believe. What is clear is that, at a time when the BJPʹs majoritarian assertiveness is already raising serious concerns, the decisions the government makes regarding the NRC will shape the future of Indiaʹs turbulent democracy – for better or for worse.

With the first COVID-19 case having been detected in the Kutupalong Rohingya refugee camp in Bangladesh, aid agencies are warning that without additional resources, there will be ... END_OF_DOCUMENT_TOKEN_TO_BE_REPLACED

According to the latest Reuters tally, more than 2.54 million people are now reported to have been infected by the novel coronavirus globally and 177,004 have died. As Muslims ... END_OF_DOCUMENT_TOKEN_TO_BE_REPLACED

Around the Islamic world, lockdowns and curfews are being extended and religious ceremonies are being cancelled outright in the hope of slowing the spread of COVID-19. Here’s the ... END_OF_DOCUMENT_TOKEN_TO_BE_REPLACED

Myanmarʹs Aung San Suu Kyi and Hungaryʹs Viktor Orban have discussed their mutual fear of Muslims. In doing so, the Burmese leader has again showed she has lost the moral standing ... END_OF_DOCUMENT_TOKEN_TO_BE_REPLACED

Fatima was gang-raped during attacks on Rohingya Muslims as part of Myanmar's ethnic cleansing campaign. Now, she and her family live in a camp in Bangladesh with few prospects, ... END_OF_DOCUMENT_TOKEN_TO_BE_REPLACED

Five years after the biggest industrial disaster in Bangladeshʹs history, there appears to be no relief in sight for the thousands of survivors who are still suffering from severe ... END_OF_DOCUMENT_TOKEN_TO_BE_REPLACED
Author:
Shashi Tharoor
Date:
Mail:
Send via mail

END_OF_DOCUMENT_TOKEN_TO_BE_REPLACED
Social media
and networks
Subscribe to our
newsletter