The Orient in the Mirror of Western Compositions

Many composers have been drawn to the world of "1001 Nights" as if by magic. Some of them are now highlighted on the debut CD of the "Borusan Istanbul Philharmonic Orchestra." Klaus Gehrke introduces the album and the musicians 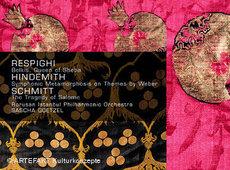 The Borusan Istanbul Philharmonic Orchestra appeared for the first time in 2003 as the house orchestra of the International Istanbul Music Festival. Among the renowned soloists who have played with the orchestra are Solveig Kringelborn, Isabelle Faust, Daniel Hope, and Denis Matsuev

​​ For centuries, Istanbul, the metropolis on the Bosporus, has been regarded as the bridge between the Orient and the West.

This year, the city has been named one of the European cultural capitals, giving it the opportunity to draw international attention to its numerous cultural institutions, which are hardly known outside of Turkey. One of these is the Borusan Istanbul Philharmonic Orchestra.

Far removed from the usual clichés

Those expecting a Turkish orchestra that can only play Oriental arabesques will quickly realize the error of their assumptions upon hearing the Borusan Istanbul Philharmonic Orchestra.

The orchestra's concert programme includes, of course, composers such as Mozart, Beethoven, Schumann, and Shostakovich and features famous international soloists such as the tenor Juan Diego Florez, the violinist Daniel Hope, Alexander Melnikov, and the Juilliard String Quartet.

Nonetheless, the orchestra expresses a kinship with the musical tradition of Turkey and plays works by Turkish composers as well as regularly featuring prominent Turkish soloists, such as the pianist Fazil Say.

Focus on the 20th century 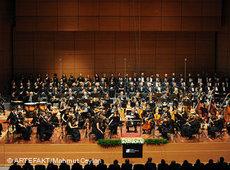 An impressive European ensemble: the Borusan Istanbul Philharmonic Orchestra during a concert in Istanbul in 2010

​​ In comparison with many other European symphony orchestras, the Borusan Istanbul Philharmonic Orchestra is a young ensemble. Its roots lie in the Borusan Chamber Orchestra, which was founded in 1993 by the Turkish conductor Gürer Aykal.

In 1999, it grew into a symphony orchestra, which quickly developed into one of Turkey's leading ensembles. Two years ago, the Austrian Sascha Goetzel was named successor to Aykal as principle conductor of the Bosporus and he brought along new ideas.

One of these is the remarkable CD debut on the Onyx label. Pieces were specially chosen by Western composers who worked on Oriental themes.

Salome, Turandot, and the Queen of Sheba 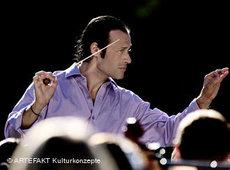 ​​ All three compositions on the CD – Florent Schmitt's dance piece "The Tragedy of Salome," which takes up themes from Richard Strauss' opera, Ottorino Respighi's orchestral suite "Belkis, Queen of Sheba," and Paul Hindemith's "Symphonic Metamorphoses on Themes by Carl Maria von Weber" – were written in the first half of the 20th century.

It is no coincidence that Hindemith is represented on the orchestra's debut CD. In the 1930s, the composer considerably influenced and played an organizing role in the musical life of Turkey.

Borusan Istanbul Philharmonic Orchestra under the direction of Sascha Goetzel plays all three works with such assertive passion, agility, and sensitivity that listeners can only wish to hear more from this orchestra soon.

Intercultural Music Projects
Building Bridges of Mutual Understanding
Artists of various ethnicity are pooling their musical forces in some German cities, tapping into Germany's cultural diversity to produce world music. While integration has become an ongoing issue in current-day Germany, they're a significant stride ahead of society. Ayla Yildiz reports

Jon Balke's and Amina Alaoui's Album "Siwan"
The Free Spirit of Al Andalus
As opposed to medieval Europe, the arts in Muslim Spain, were free. Now the album "Siwan" celebrates the music and the spirit of Al Andalus, demonstrating that Islamic civilization is one of the cornerstones of Western culture, as writes Richard Marcus

Revival of Afghan Music
Fiddles for Kabul
In Taliban times, musical performances and instruments were officially forbidden. Over the past two years, Dr. Ahmad Sarmast, an expatriate musician and musicologist, has been leading an initiative to rebuild formal music education in Afghanistan. Martin Gerner met him in Kabul

END_OF_DOCUMENT_TOKEN_TO_BE_REPLACED
Social media
and networks
Subscribe to our
newsletter