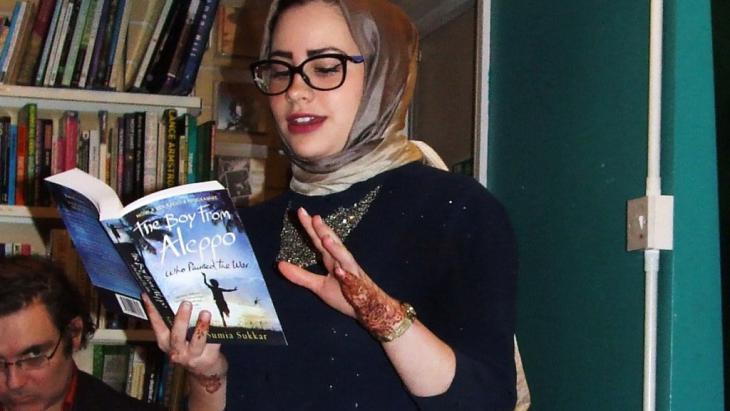 "The Boy from Aleppo who Painted the War" by Sumia Sukkar

Sumia Sukkar wrote a novel about a young Syrian boy with Asperger Syndrome who paints the horror and violence of the war around him in vivid colour. BBC Radio 4 adapted the novel for its Saturday Drama series. Susannah Tarbush read the book, listened to the radio play and spoke to its young author

The drama "The Boy from Aleppo who Painted the War", broadcast recently on BBC Radio 4, was a powerful and moving prelude to a week of special, intensive coverage of the Syrian conflict across BBC radio and TV.

The play was adapted from the debut novel of the same title by British-born Sumia Sukkar, daughter of a Syrian father and Algerian mother. Remarkably, Sukkar was only 21 when the novel was published in hardback in 2013 by London-based independent Eyewear Publishing.

To coincide with the radio drama, the publisher brought out a paperback edition of the novel with a new cover design. The paperback includes an afterword by Laura Guthrie, a Glasgow University PhD student who researches fiction featuring characters with Asperger Syndrome.

Adam, the central character in Sukkar's novel, is a 14-year-old Syrian with Asperger's, a condition on the autistic spectrum. His mind translates sights, sounds and feelings into colour. He has a talent for painting, in which he engages obsessively.

Through Adam's first-person present-tense narration, Sukkar skilfully conveys his bewildered perceptions of the growing violence and horror around him "Why do you always paint war?" asks his brother Isa. "Because it's filled with endless painting possibilities and the range of colours is so wide," Adam replies.

The harsh realities of war 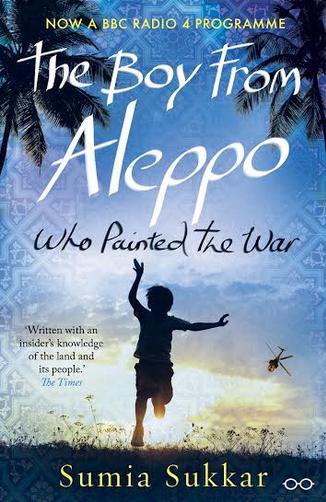 "I hope my readers feel an emotional attachment with the characters and are able to get a glimpse of the disastrous state many families are in. Syrian children had to suddenly wake up one day as adults, and missed an essential part of the growing up experience" says Sumia Sukkar

Adam's mother died when he was 11. He lives in Aleppo with his schoolteacher father, older sister Yasmine, and student triplet brothers Khaled, Tariq and Isa. The family is badly impacted by the war. The physical and mental health of Adam's father disintegrates, and his brothers get caught up in the fighting.

Yasmine does her best to keep the family together and to protect Adam. At the same time, she suffers the pain of an impossible love affair. When she is abducted and tortured by militiamen, the first-person narration switches from Adam to her.

Sukkar started writing "The Boy from Aleppo" while reading for a BA (Hons) in Creative Writing at Kingston University, London. Her tutor was the Canadian-British poet, critic and teacher Dr Todd Swift, director and publisher of Eyewear Publishing.

Dr Swift told Qantara.de: "I taught creative writing at Kingston University for seven years and had about a thousand or so students on the BA, MA and PhD levels; Sumia would be in the top three or four of those in terms of talent."

She was a "dedicated, serious, ambitious writer, who took the support I gave her editorially and ran with it. Her novel was completed in less than a year, and her hard work was impressive. She has a great mind for metaphor and surprising detail. I knew when we met she was a born writer."

Passion for the written word

Asked why she did a BA in Creative Writing, Sukkar told Qantara.de: "I  have always loved writing, ever since I was young. It's always been part of who I am and I knew I wanted to study it and pursue the path I am now on."

Sukkar derived many cultural traditions from her Syrian father and Algerian mother, but "being born and raised in London, I weaved my own cultural identity that helped me greatly in my writing."

Her father's family are from Damascus "which I visited a couple of times as a child and felt attracted to in a surreal way. I still have many relatives there whom we keep in touch with over Skype and phone calls when the situation permits."

The idea for "The Boy from Aleppo" came to her when she was working on her university dissertation. "It was so clear in my mind that I fell in love with it right away and started writing everything that I came up with. In one sitting I could see Adam clearly in my mind."

Why did Sukkar decide that Adam should have Asperger's? "I wanted to give my character a touch of innocence, in contrast to the horrible things that happen in war. After a lot of thought, and meeting a friend of mine whose brother is autistic, it fell right into place. I conducted a lot of research, met with several autistic kids and adults, and visited autism centres: all that helped make Adam's voice and character crisply clear," she says. "My father is a painter and I derived a lot of my inspiration for the paintings and visual creations from him. His voice led me through my book in many ways."

How difficult was it to write the disturbing and brutal scenes in the novel? "It was a saddening experience when what I wrote was based on true facts. However, what was based on fiction was enjoyable for me as I delved into the darkest part of my mind."

Regarding the switch of first-person narrator to Yasmine in the section on her abduction and torture, Sukkar says: "I wanted Yasmine's chapter to feel like an out-of-the-body experience; it was a must that she led the story in those scenes that Adam could not have related as such." 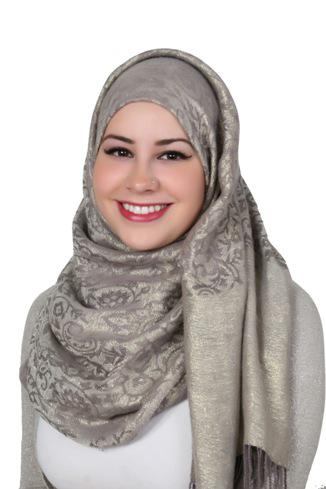 Sumia Sukkar was only 21 years of age when the hardback version of her book was published by Eyewear Publishing. The idea for "The Boy from Aleppo" came to her when she was working on her university dissertation

Sukkar moved to the UAE after being offered "a great job at the Abu Dhabi Film Festival while I was writing my novel. Now I am working as a copywriter at an advertising agency and I love it."

She travelled from Abu Dhabi to London for the launch of the paperback of "The Boy from Aleppo" and for the broadcast of the drama.

The play – performed by a first-rate cast – was produced by B7 Media, with scriptwriters Richard Kurti and Bev Doyle making an excellent job of reshaping the 251-page novel into a one-hour drama.

Sukkar was not directly involved in the dramatisation, and had not heard the play before it was broadcast. At the launch party for the paperback a few hours later she said she was pleased that the production company had retained "the essence and beauty" of the book.

It took her time to get used to hearing her book come to life, with its characters having voices that were very different from those she had envisioned, "but it was lovely in the end, and I really enjoyed it."

"I hope my readers feel an emotional attachment with the characters and are able to get a glimpse of the disastrous state many families are in. Syrian children had to suddenly wake up one day as adults, and missed an essential part of the growing up experience."

Sukkar believes that the role of the Syrian artist today "is essential, in that we must portray the beauty that still exists in Syria despite the current war. Art is a powerful vehicle for expressing many things, and through my novel and Adam's paintings I worked on expressing the inexpressible, because what may be lost in translation can be revived in art."

Sukkar is now working on "another idea for a book, that will be set in London – very different to 'The Boy from Aleppo'. I love experimenting with different genres and locations, and so I am working on it being a romantic thriller that focuses on the theme of loneliness." At the same time, she is applying to institutions in London and Scotland to do a Masters in creative writing.

The foreign policy direction favoured by Washington's new incumbent is putting a strain on relations with Turkey. The two nations look set to clash over a whole host of issues, ... END_OF_DOCUMENT_TOKEN_TO_BE_REPLACED

On the 10th anniversary of the Arab Spring we can’t quite escape that substance called remembrance. Yet, eschewing facile modes of nostalgic remembrance and/or tragic lamentation ... END_OF_DOCUMENT_TOKEN_TO_BE_REPLACED

Mass protests began in Egypt on 25 January 2011. They triggered the overthrow of long-time ruler Mubarak. Ten years later, many human rights activists and journalists are in ... END_OF_DOCUMENT_TOKEN_TO_BE_REPLACED

Mass protests began in Egypt on 25 January 2011. They triggered the overthrow of long-time ruler Mubarak. Ten years later, many human rights activists and journalists are in ... END_OF_DOCUMENT_TOKEN_TO_BE_REPLACED

END_OF_DOCUMENT_TOKEN_TO_BE_REPLACED
Social media
and networks
Subscribe to our
newsletter