The British Iraq Commission
Federalism as an Exit Strategy?

Although the British equivalent to the US Iraq Study Group, the UK Iraq Commission, calls for a major diplomatic offensive to bring about a political solution for the Iraq conflict, it lacks practical suggestions for implementing its strategy, writes Christian Luenen 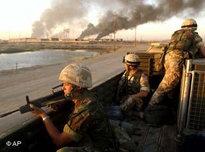 There are no longer any simple solutions for Iraq, only painful ones, writes Christian Luenen

​​In July, the British fact-finding commission on the Iraq deployment, the counterpart to the American Iraq Study Group, presented the findings from its sweeping, 118-page report. The conclusion arrived at by the Commission, facilitated by the Foreign Policy Centre and Channel 4, is unmistakable: There are no longer any simple solutions for Iraq, only painful ones.

In view of the persisting catastrophic security situation and the belief that British troops are no longer in the position to act in a stabilizing function, the Commission called for a withdrawal of British troops from Iraq – as soon as Iraqi units have received sufficient training to take over the tasks of the Coalition troops.

This appeal differs fundamentally from the strategy pursued thus far, which has made a withdrawal of the troops dependent on a general improvement in the security situation.

Moreover, the Commission asserted in its appraisal that the overambitious goal of installing a democracy à la Washington in Iraq had clearly failed and that it was now critical to find alternative strategies.

The British government should therefore start concentrating its efforts on the following:

Furthermore, the Commission appeals to the international community to dramatically increase its efforts to bring about a comprehensive solution to the Middle East problem, based on a lasting peace treaty between Israel and the Palestinians.

As expected, the Commission hopes that the federalism reform, which is anchored in the Iraqi constitution, but has not yet been implemented, will prove to be a solution for the ongoing civil war and denominational conflicts.

The idea of supporting a federalist order in Iraq is not new. Persons such as Leslie Gelb, Professor Emeritus at the Council of Foreign Relations in the United States, Joseph R. Biden, U.S. Senator from Delaware, and Dr. Gareth Stansfield, Middle East specialist at Chatham House, have long advocated for a denominational federalist order, even for a tripartite partitioning of Iraq.

Often ignored in recent years by policy makers, this idea is now being given more serious attention in the context of the current search for an exit strategy.

Regardless of whether one considers a federal solution to be a good idea or not, the largest problem consists in how such a solution could be realized at all.

The fact is that most Iraqis do not support this solution, that despite the ongoing ethnic-denominational cleansings the different regions in Iraq are not homogeneous, and that major political power struggles are taking place within each denomination.

The regionalization of the Iraq conflict

Although the involvement of adjacent countries has become increasingly imperative, especially in regards to the creation of a new security arrangement in the Middle East and, in the event of Iraq's implosion, to prevent the conflict from spreading beyond its borders, the influence of Iraq's neighbours can exert on the conflicting parties within the country is rather limited.

Thus, the British panel of experts has failed to provide answers to what are likely the three most pressing questions concerning the resolution of the conflict in Iraq:

Whether it is possible to attain a peace treaty for the Iraq conflict, as in Dayton, is ultimately a question with which the geo-strategists, in particular the Anglo-Saxon occupying powers, have most likely been concerned for some time now – for as Anthony H. Cordesman from the Center for Strategic and International Studies in Washington claims, the policies of the United States in the post-war period, particularly Paul Bremer's, are to a great extent responsible for the undermining of the Iraqi state.

Interview with Faleh Abdel Jabar:
"Denominational Federalism Is Dangerous and Separatist"
Iraq is increasingly struggling with its centrifugal forces. In this interview, Faleh Abdel Jabar, head of the Iraq Institute for Strategic Studies, discusses the various concepts of federalism and how they might work for Iraq. Interview by Youssef Hijazi

Public Opinion Surveys in Iraq
The Democratic Hopes of Iraqis
The escalating violence in Iraq gives a bleak impression of that country's prospects. While neither American nor Iraqi security officials have yet found a way to tame the militiant groups, the Iraqi public is increasingly drawn toward a vision of a democratic, non-sectarian government for the country. Mansoor Moaddel reports

www
The Final Report by the Iraq Commission

END_OF_DOCUMENT_TOKEN_TO_BE_REPLACED
Social media
and networks
Subscribe to our
newsletter