The CMAM near Tunis has become one of the most important and dynamic facilities for European-Arab cultural exchange in recent years. The centre is home to the country's national sound archive and is a popular location for international concerts. Martina Sabra paid a visit

​​ The artists' colony at Sidi Bou Said has become a favourite destination for foreign tourists in Tunisia. The narrow, winding streets with their white Andalusian-style houses, the fiery red cascades of bougainvilleas tumbling over the walls, and the magnificent sea views all combine to draw visitors from far and wide. Few of these visitors are aware that Sidi Bou Said is also home to one of the most exciting cultural projects in the entire Mediterranean area.

The Tunisian Ministry of Culture has provided a home for the "Centre des Musiques Arabes et Méditéranéennes" or CMAM in the "Ennejma Ezzahra" (Star of Venus), the spacious and beautifully restored former residential palace of Baron Rodolphe d'Erlanger (1878–1932).

The CMAM has a variety of tasks including the collection of Tunisian music and the archiving of music documents in the national sound archive. It also ensures the preservation of the artistic and musicological heritage of Baron d'Erlanger. The palace is home to a museum and serves as a venue for concerts in its interiors and courtyards.

Mediator between East and West

And, as if all that were not enough, the CMAM has also become one of the most important and dynamic facilitators of musical and cultural exchange between Europe and the Arab world. "For young Western musicians who participate in our workshops, the first encounter with Arab music is often like a revelation," explains Mounir Hentati, head of communications and deputy director of the CMAM. "For their part, the participants from Tunisia value the opportunity to study jazz or classical music first-hand."

This has now led to a situation where young Tunisians no longer have to go abroad if they want to study jazz or learn to play a particular instrument. "Some of the Tunisian students at our master classes and workshops are now teaching at Tunisian state music schools," says Hentati. 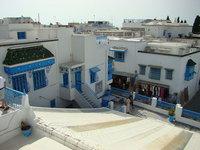 ​​ If the builder of the palace only knew, he would surely be delighted. The painter and musicologist Rodolphe d'Erlanger, who lived in Sidi Bou Said from 1910 until his death in 1932, was someone who helped to create a greater understanding between Orient and Occident. In collaboration with some Tunisian musicians he wrote a six-volume series on the fundamentals of classical Arab music, which is still considered the standard work on the subject. He was also a key figure in the planning of the first Arab Music Conference in Cairo in 1932.

There were several reasons why this son of a French-British aristocratic family with German roots decided to settle in a tiny village on the north coast of Tunisia in 1910.

His father, a Paris banker, did business with the Tunisian Beys through which he acquired extensive landholdings in the country, and then there was the fact that the young Rodolphe had health problems.

But d'Erlanger's motives for the move to Tunisia were not just practical. The young artist had already spent some months travelling through Egypt with his wife and child in 1905. The Orient fascinated d'Erlanger, but for him it was not simply a case of opting out of European civilisation to seek out the spiritual kick of the Orient. His enthusiasm for the Arab world and its people was profound.

The portraits that d'Erlanger painted of his Tunisian neighbours, friends and staff are free of exoticism and full of respect for the indigenous people and their culture.

D'Erlanger's great motivation, it seems, was the desire to revive the Andalusian-Arab civilisation, or at least what he and his contemporaries imagined it to be. The "Ennejma Ezzahra" palace was the base for this project. The painter studied the great buildings of Moorish Spain. In the old city of Tunis he did detailed drawings of entire buildings. From all this, he created his own version of Al-Andalus: an Arabian residential palace, with Arab-, Italian- and British-influenced interiors for a perfect West-East lifestyle. 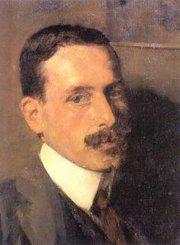 The painter and musicologist Rodolphe d'Erlanger, who lived in Sidi Bou Said from 1910 until his death in 1932, helped to create a greater understanding between Orient and Occident

​​ After d'Erlanger died, his Italian widow lived in the palace. With the passage of time, however, the maintenance and care of the property became an increasing burden for the succeeding generations of heirs.

The Italian government showed an interest in the property for a while, but in 1989 it was the Tunisian government that stepped in to purchase the palace and declare it a national monument. Well-known Tunisian artists, including the world famous lutenist Anwar Brahem and the Tunisian poet and painter Ali Louati lent their support to ensure that the centre would become not only a museum, but also a multi-disciplinary, dynamic project. Their efforts were to bear fruit.

The CMAM can be proud of what it has achieved so far. The baron's paintings were lovingly restored in 2007 and can now be admired in the palace. The museum is open to a limited number of visitors daily.

The national sound archive now contains 10,000 items and is really bursting at the seams.

The oldest exhibits on display in the archive were collected by the German ethnomusicologist Paul Träger, who recorded folk songs in Tunisia on a wax cylinder in 1903. "I came across these recordings on a visit to the Berlin Phonogramm Archive," explains Hentati, who is desperately keen to have more funding for musicological research. "During my visit to Berlin I discovered that, during the First World War, German researchers had recorded the lyrics, melodies and rhythms of songs sung by Tunisian prisoners of war."

German-language work has been done using some of the findings of this research. In Tunisia, on the other hand, almost nothing is known about either the interviews or the accompanying collected material.

​​ The CMAM's musical concept has changed over the years. "In the early years, we concentrated on our own traditional music productions," says Hentati. Now the focus has shifted towards international exchange with public concerts and master classes. Every year, jazz soloists from Belgium and Tunisia, as well as other countries, come together for an event entitled "Couleurs".

Thanks to French support, the series "Jeunes Virtuoses" brings together young classical instrumentalists; young musicians from Germany have also taken part. World music ensembles from all five continents participate in the "Musiqaat" (music) series, which is dedicated to Tunisian music.

"I hope that this centre will help encourage not only exchange between the Arab world and Europe but with the whole world," said the famous Tunisian lutenist Anwar Brahem at the opening of the CMAM. Sometimes, dreams really do come true!

END_OF_DOCUMENT_TOKEN_TO_BE_REPLACED
Social media
and networks
Subscribe to our
newsletter