Skip to main content
The Chinese Regime and the Uighurs

Colonialists in Their Own Country

The Communist Party has always reacted with violence whenever it has been faced with the efforts of its Muslim Uighur minority to gain its autonomy. One reason is the strategically important location of the province in which they live, but there are others. Kai Strittmatter looks at the issues involved

Angry protests against the central government in Beijing: the Uighur minority feels it suffers social exclusion and political repression at the hands of the Chinese

​​ China is a multi-ethnic nation. Officially, the Chinese state recognises 55 ethnic minorities, but – unlike in the former Soviet Union – the minorities only add up to 8 percent of the population. The Han Chinese make up the overwhelming majority in almost all the country's provinces – except in Tibet and Xinjiang. But even there, power is firmly in Han hands. The two regions are autonomous only in name.

Their governors may be Tibetans or Uighurs, but the party secretaries are always Han Chinese, and it is they who make the decisions. "National unity" is a value which is hammered into the children at school.

The authorities only allow the display of ethnic identity as a kind of carnival performance: for example, at the National People's Congress it's virtually expected that the deputies from Lhasa and Urumqi will turn up in their colourful costumes, so that they can demonstrate the loyal support of these exotic but enthusiastic ethnic groups for the party leadership.

But whenever there are violent incidents in one of these provinces, the question presents itself again: why does the Communist Party have such a problem with genuine autonomy? Why is the resort to violence the only reaction it knows? One answer can be found in the nature of the Chinese political system: China is a one-party dictatorship.

Urumqi, the capital of Xinjiang province in western China, has been the centre of the recent Uighur protests against the power of the Chinese government

​​ As do all dictatorships, the Chinese system tries to keep power concentrated at the centre. It reacts in a paranoid fashion to any supposed challenge. The Communist Party rejects pluralism among Han Chinese as well. One Chinese blogger wrote following the violence in Tibet in 2008, "The natural consequence of the lack of respect for individual rights is the lack of respect for the rights of minorities."

Another factor is Han chauvinism. The Chinese have always held their country for the centre of civilisation, and they've found it quite natural that even conquerors who defeated them in war, such as the Mongols and the Manchurians, should be swallowed up by their culture and assimilated into it. 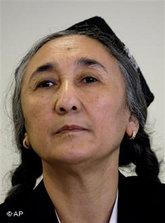 The government in Beijing accuses the president of the Uighur World Congress, Rebiya Kadeer, who is living in exile in the US, of having incited the latest uprising

​​ Even nowadays, many Chinese see peoples such as the Tibetans and the Uighurs as backward, dirty, superstitious and ungrateful. That leads towards a "colonialist attitude", as the Chinese writer Wang Lixiong puts it in his book about the "Xinjiang problem".

It results in a system which finds it quite normal that Han settlers should flood into areas, taking all the best jobs and flats as they go, while the raw materials in the region are sold off to the West.

Members of the minorities have been complaining for years that the Communist Party's incitement of pan-Chinese nationalism has led to a noticeable increase in Han chauvinism. The Uighurs point to the destruction of the historic centre of the city of Kashgar as the latest offence. The Chinese call it "renovating the city", but it is no secret that the police and army found the old city too hard to control.

Another reason for the Communist Party's reaction is the strategic position of the two provinces. Both Tibet and Xinjiang extend along huge areas of China's border territories. The Chinese empire originally occupied these lands for its own protection, and the government believes for the same reason nowadays that it dare not show the slightest weakness.

That's one reason that Beijing sends settlers – so that Han Chinese will become the majority. Han Chinese were 5 percent of the population of Xinjiang in 1950; now they make up 45 percent.

Finally, Beijing is frightened of the effects of the economic crisis. The official news agency Xinhua recently expressed the fear that 2009 could be the year of "contradictions and conflicts" throughout the country.

China and the Uighurs
Terrorism Panic – a Welcome Excuse?
Just before the opening of the Olympic Games in Beijing, two terrorist attacks shook China, killing a total of more than 20 people, mainly police officers. The Chinese authorities accused Muslim extremists of carrying out the bombings. Since then, the world has started taking notice of an ethnic group previously only familiar to specialists: the Uighurs. Albrecht Metzger has the details

China's Muslim Minority
China's Battle Against the Uighurs Uighurs
The way China is treating the Tibetan uprising has outraged the West. The suffering of the Uighurs, on the other hand, receives little attention. Beijing defends the suppression of the Muslim minority as fighting terrorism. Andreas Leixnering reports

Portrait Rebiya Kadir
Fighting for the Uighurs' Rights
The global war against terrorism provides China with a pretext to persecute its own Muslim population. Human rights activist Rebiya Kadir speaks out about the situation of roughly eight million Uighurs in northwestern China. Tobias Grote-Beverborg reports

END_OF_DOCUMENT_TOKEN_TO_BE_REPLACED
Social media
and networks
Subscribe to our
newsletter