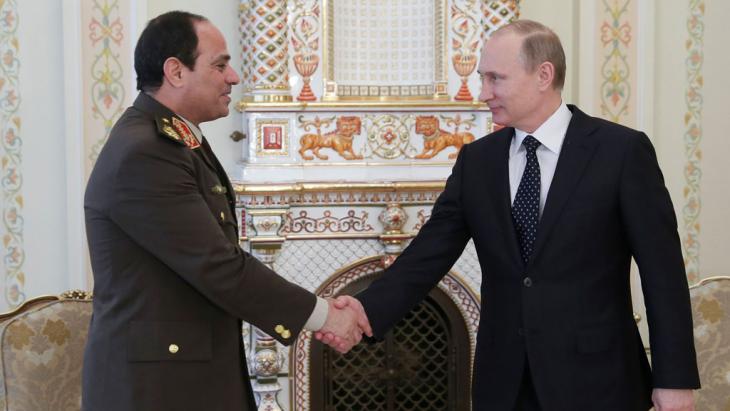 The Crimean crisis
The Near East: scene of a new Cold War?

The Crimean crisis could mark the beginning of a new confrontation between East and West. Not only is there already talk of a second Cold War, there are already signs of it in the Near East. A commentary by Nora Müller

As tension between Russia and the West mounts due to the Crimean crisis, the term "Cold War" is increasingly being bandied about. A second episode of this confrontation between East and West would come with unforeseeable consequences, and not only for the security and stability of Europe. Should it indeed come to a new Cold War, the effects would be felt immediately throughout the Near and Middle East. The region could once again become the scene of a political tug-of-war between Washington and Moscow.

The first signs of a "Great Game" between the US and Russia in the Near East are already discernible. In recent years, Russia has systematically increased its presence in the region. The fact that relations between the USA and some of its most important partners in the region – chiefly Saudi Arabia but also Israel and Egypt – have noticeably cooled, plays right into Moscow's hands. In line with Putin's neo-imperial agenda, Russian Near East policy is striving to increase Russia's sphere of influence, to tap new markets and – from the Kremlin's point of view – to put a stop to the sort of unpopular Western interventionism that comes shrouded in the cloak of an ostensible "responsibility to protect" – as was the case with Libya.

"Great Game" in the Near East

Russia's unyielding stance on the Syrian conflict is the culmination of these politics. Its unconditional support for the Damascus regime allows Assad to remain in power. Above all, however, it makes Russia an indispensable actor in the Syrian crisis. Russia is also playing an important yet ambivalent role in the discussions surrounding the Iranian nuclear programme. On several occasions in the past, Russia – in some cases together with China – has broken ranks with the negotiating parties on the consensus reached in order to prevent sanctions being imposed on Iran.

Furthermore, with regard to a permanent agreement on a nuclear programme, which is scheduled to be signed, sealed and delivered by 20 July, the differences between Russia and the Western states involved in the negotiations are still a long way from being resolved.

But Moscow's heightened influence in the region is not limited to the Syrian crisis and the nuclear conflict. In Egypt, too, which after Sadat's departure from Nasser's pro-Soviet course left the orbit of Russia's foreign policy, Moscow is once again gaining a foothold. 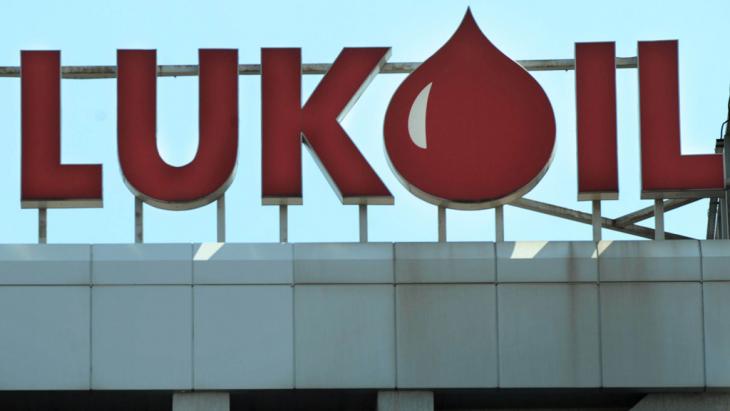 Lukoil, the largest mineral oil company in Russia and one of the largest oil producers in the world, has secured a number of lucrative contracts in Iraq in recent years. According to Nora Müller, Gazprom is trying to control gas flowing from the eastern Mediterranean towards Europe in order to keep potential competitors at bay. In both cases, good relations between Russia and governments in the Near and Middle East are of key importance

When the USA cut its budget for military aid to Cairo by several hundred million dollars after President Morsi was ousted from power, Russia was ready and waiting. This is because when working with its regional partners, Moscow is guided only by its own power-political interests. Values such as the rule of law and the protection of human rights do not come into the equation.

As recently as mid-February, Egypt's military commander General Abdul Fattah Al-Sisi travelled to Moscow to negotiate a two-billion-dollar arms deal. It is particularly worth noting that without enormous financial support from Saudi Arabia and other Gulf states, economically ailing Egypt would never be able to afford such a costly weapons deal. The fact that Riyadh agreed to the deal with Russia and in part supplied the necessary means could also be understood as a jab at the USA by the Wahhabi kingdom.

Despite being severely tested – Moscow's rather pro-Palestinian stance in the Middle East conflict and its Iran policy have long rankled the Israeli government – relations between Russia and Israel have notably improved in recent years. Nine months prior to Obama's first visit to Israel, Putin was already a guest in Tel Aviv and Jerusalem in June 2012.

The following February, the Russian energy giant Gazprom signed a 20-year contract for the exclusive sale of liquid gas from the Israeli offshore field Tamar. This is certainly no coincidence. Gazprom is trying to control gas flowing from the eastern Mediterranean towards Europe in order to keep potential competitors at bay. It is obvious that such a strategy can succeed only through resilient relations with Jerusalem.

In terms of energy politics, Russia has also recovered lost ground in Iraq, which until the fall of Saddam Hussein was one of its key bridgeheads in the region. Lukoil, Russia's largest mineral oil concern, has secured a number of lucrative contracts in recent years, extraction in the oil field West-Kurna 2 being one of them. The expansion of the Russian presence in the Gulf States also fits in with this picture. In 2007, Putin became the first ever Russian head of state to visit the states of the Gulf Co-operation Council (GCC), firing the starting shot for a continuous deepening of relations that culminated in 2011 in the Strategic Dialogue between the GCC and Russia.

What, then, would be the effect on the Near and Middle East should the current tensions between Moscow and Washington develop into a new Cold War?

In the short term, Russia might use the Syrian conflict and the nuclear negotiations to put pressure on the USA. From Moscow's point of view, it would be a logical move to offer a co-operative attitude on these two issues in exchange for concessions with respect to the situation in Ukraine. Should the USA not agree to such a deal, Russia could reduce its pressure on Assad to co-operate with the destruction of Syria's chemical weapons arsenal, undermining the implementation of the chemical weapons treaty signed in August 2013. 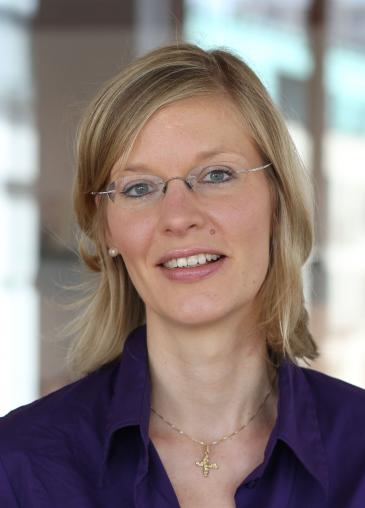 The likelihood that Moscow might sabotage negotiations with Iran as a tactical move seems rather small, as a permanent solution to the nuclear controversy would be in Russia's best interest as well. Nonetheless, Russia might try to thwart a rapprochement between America and Iran by broadening its own relations with Tehran. At the same time, Moscow is likely to offer Iran significant co-operation deals. There were already reports in January that Russia and Iran were negotiating an oil-for-goods deal, guaranteeing the Islamic Republic Russian produce in exchange for deliveries of oil to Moscow.

No alternative to the USA as guarantor of safety

In the medium term, a new Cold War could once again lead to the formation of opposing political camps in the Near and Middle East: America's allies versus Russia's allies. For a region that is already marked by deep distrust amongst its regional actors in the face of numerous political, religious and ethnic conflicts,  further division would be fatal. Co-operation between the different states in solving regional problems is already difficult enough and would then be exacerbated even further, making the creation of comprehensive co-operative security structures virtually impossible.

One thing is clear: Saudi Arabia and other Gulf States as well as Egypt and Israel are making no secret of their dissatisfaction with current US politics and could even be said to be flirting with Russia. As a guarantor of regional security, however, Washington is the only option for the foreseeable future. In terms of economic attractiveness too, Russia is still light years behind the USA because of its continued strong dependency on raw materials and its second-class industrial products. Anyone who can afford it will continue to buy American rather than Russian arms.

It is also worth mentioning that Russia's soft power is not exactly considerable in the Near and Middle East. Many people in the Arab world welcomed Yanukovych's fall from power, seeing it as a blow to the power in Moscow that is bolstering the hated Assad regime. Should the minority rights of the Muslim Crimean Tatars be harmed by Russia's annexation of the peninsula, it would further fuel anti-Russian resentment in the Arab world.

Chinese President Xi Jinping's visit to Saudi Arabia in December 2022 may have rattled Washington, but it simply highlighted the Arabs’ desire to diversify their foreign relations ... END_OF_DOCUMENT_TOKEN_TO_BE_REPLACED

Iran has withdrawn its participation in the Frankfurt Book Fair, accusing the event of meddling in the country's domestic affairs. Organisers have denied the accusation. By ... END_OF_DOCUMENT_TOKEN_TO_BE_REPLACED

Analyst Iyad El-Baghdadi examines the ongoing tensions between the United States and the two Gulf states – Saudi Arabia and the UAE – and their geopolitical implications in ... END_OF_DOCUMENT_TOKEN_TO_BE_REPLACED

From the Euphrates to the Mekong, dams that ensure one country's water supply risk leaving others parched. But shared water resources can be a source of peace as well as conflict ... END_OF_DOCUMENT_TOKEN_TO_BE_REPLACED

For over fifty years, British photographer Peter Sanders travelled across the Middle East and further afield, seeking out the saints of Islam. His work uncovers a little-known ... END_OF_DOCUMENT_TOKEN_TO_BE_REPLACED
Author:
Nora Müller
Date:
Mail:
Send via mail

END_OF_DOCUMENT_TOKEN_TO_BE_REPLACED
Social media
and networks
Subscribe to our
newsletter