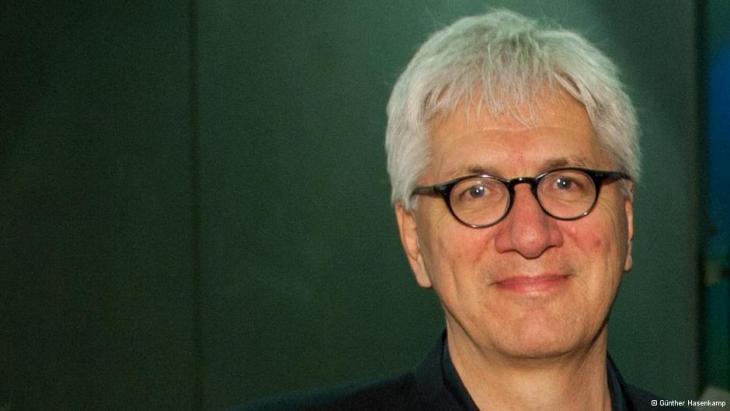 The Cultural Scene in Egypt

Creative Artists Are the Motor for Change

﻿Creative artists in Arab countries are playing a key role in the revolutionary process. But their efforts are being hampered by poor infrastructure. This is where international cultural work can help, says Günther Hasenkamp, Programme Director at the Goethe Institute in Cairo

The Arab Spring has fundamentally changed many countries in the Middle East and North Africa. The Goethe Institute in Cairo is situated just a few metres from Tahrir Square, the epicentre of the "Arabellion". What has been your experience of this period?

Günther Hasenkamp: There was a sense of great euphoria following the toppling of Mubarak. Someone parked a demolished state security van outside the institute with graffiti on it that read "The End". All the signs pointed to a radical new beginning. There was a desire to perceive Cairo as the construction site of a new society, even if the architects were nowhere to be seen.

But this exhilaration dissipated within weeks. Gradually, after the summer at the latest, the sense of disappointment grew. The post-revolutionary period is, just like the famous 18 days in January and February, a highly emotional process. We are experiencing it at first hand – and not just because we can hear all the chanting coming from Tahrir Square.

Arab creative artists were and still are an important part of the revolution. How is this historic upheaval manifesting itself in your cultural work on the ground in Egypt?

Hasenkamp: Culture can be a seismograph for social conditions without it descending to the level of one-dimensional social diagnosis. There are numerous examples of this in pre-revolutionary Egypt, Al-Aswani's novel "The Yacoubian Building" for example, and Ahmad Abdalla's film "Microphone".

Less well-known is the universe of independent short filmmakers, who are closely associated with the underground movement and fly beneath the censorship radar, so to speak. Such work can be viewed in our project "Arab Shorts". What do these artists concern themselves with? "We are not the doctors," said Alexander Herzen back in the 19th century: "We are the pain." 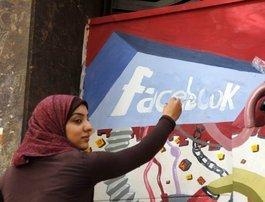 "The revolution has fundamentally changed peoples' lives. They have stepped out of their isolation into a new collectivity, even if this collectivity is only a virtual one, as in the case of the Facebook communities." Pictured: Egyptian democracy activist in Cairo

​​This is a very good description of pre-revolutionary Arab culture. And in this respect it should have been no surprise to find so many cultural activists among the revolutionaries.

But the revolution has fundamentally changed peoples' lives. They have stepped out of their isolation into a new collectivity, even if this collectivity is only a virtual one, as in the case of the Facebook communities. The private sphere has suddenly become political and the public private, to a certain extent. Demonstrators took up a broom to sweep the streets of Tahrir, which was now "their" square and no longer an extraneous space under police guard.

A re-appropriation has taken place here, the people have reclaimed something that had been taken away from them – a sense that is certainly very understandable for the Occupy movement elsewhere in the world, regardless of any other differences.

This is all highly complex. In December, we teamed up with the cultural organisation "Al Mawred Al Thaqawy" in an attempt to discuss some of these ideas at a "forum" attended by Arab and European guests – the mood there fluctuated between euphoria and depression. Fluctuating situations such as this are now a frequent occurrence.

Germany and Europe were surprised by the onset of the revolutionary wave a year ago. How did the Goethe Institute respond to these dramatic events?

Hasenkamp: It soon became clear that democratic forces had quite literally no "space" to unfurl. So we made our former gallery available to democratic youth initiatives and renamed it the "Tahrir Lounge". 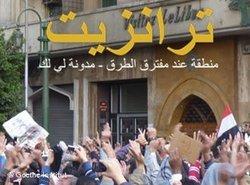 "A chance to express one's views without fear of repression." The Goethe Institute's web journal "Transit"

​​The young people organised themselves and it wasn't long before the lounge was hosting a huge number of meetings and seminars, even concerts and what were known as "Tweet Nadwas", where an issue was debated as Twitter reports on the subject were projected onto a wall. The activities of the "Tahrir Lounge" are essentially political education.

In March, we launched an online Webjournal called "Transit". Like a time recorder, we wanted to ask young people to write down the issues, sentiments and discussions that were now having an impact on them. Not necessarily to document this information – but because this was an historic moment, a chance to express one's views without fear of repression.

Our existing commitment to Arab film turned out to be helpful. In the summer, we organised an Arab film week together with the Berlin "Arsenal" cinema. It was a chance for us to showcase the significance of independent films made without any concessions to the state.

So you aim to give young democracy activists a place to discuss and debate. Under the Mubarak regime, many cultural institutions were not allowed to tackle political issues. How freely can you operate as a cultural player, is censorship still a concern?

Hasenkamp: Under Mubarak, the existence of protected spaces was very important. The dates January 25 and of course February 11, the day the dictator was toppled, came like a kind of redemption: At last, people could talk about politics freely! But it wasn't long before the military began clamping down on the critics. 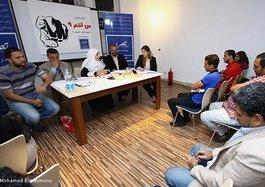 Improvised support: Because democratic forces had no "space" to unfurl, the Goethe Institute made the former gallery available to democratic youth initiatives and renamed it the "Tahrir Lounge"

​​Several NGOs – some US-sponsored, but also the Konrad Adenauer Foundation – must be feeling somewhat threatened right now, having had their offices searched and a travel ban imposed on their staff. An ugly contradiction is emerging here: While western governments see promotion of "civil society" as a contribution to the democratisation process, the military and state authorities perceive this "civil society" as a threat, as an agent of destabilisation.

And there is something else. Following the Islamic parties' election victory the cultural sector is keeping a close eye on whether the new government is giving culture the freedom it needs to function effectively. So it could be that protected spaces retain their importance.

Perhaps a cultural institute must in any case serve as a "field hospital" – a place removed from any kind of battle zone, a place of refuge where future action can be considered, particularly if something has been broken and uncertainty reigns.

Many creative artists in the region have been hoping for swift change since the start of the Arab Spring movement. But the initial enthusiasm, as you have just described it, is now noticeably muted. What possibilities are there for international cultural work to support and shape the transitional process?

Hasenkamp: A certain despondency, mixed in with defiance and occasional waves of resistance, is currently discernible. The overriding sense is that the "revolution" was "kidnapped", so to speak – by the military and the Islamists.

People quip that many artists are either producing nothing at all at the moment, or at least nothing on the subject of the revolution. But, as an artist in particular, it is hardly possible to avoid the issue. There is of course a great deal of descriptive work. 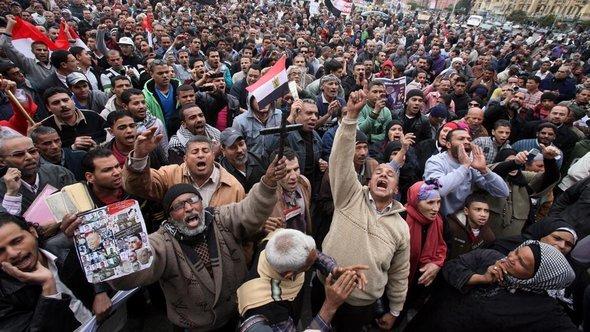 Egypt one year after the revolution: "A certain despondency, mixed in with defiance and occasional waves of resistance, is currently discernible. The overriding sense is that the 'revolution' was 'kidnapped', so to speak – by the military and the Islamists," Hasenkamp explains

​​There are many documentary films using predictable aesthetic methods that nevertheless captivate through the emotional power of their images. One cannot fail to be moved by images of an increasingly panicked police officer firing his pistol at demonstrators.

Then there are initiatives such as the civil society organisation "Mayadin-al-Tahrir" which used films and video clips as political education tools in advance of the elections.

But it is those direct political interventions using artistic means that have the greatest impact. In Syria, for example, activists put red paint into public fountains so that "blood" would flow into the city – until the authorities shut down the water supply. In Cairo, the faces of senior police officers who had issued orders to shoot appeared on "Wanted" posters and as stencil graffiti sprayed onto walls. Sarcastic and aggressive street art, such as the work of a group in Tunisia calling itself the "cavemen", is enormously popular.

Film and theatre are primarily documentary genres, and a key medium at present is the digital image. Media initiatives such as Mosireen or Kazeboon film police violence and publish it on Youtube or at improvised screenings on streets and squares, such as "Tahrir Cinema" last summer.

On that particular weekend, from the midst of a demonstration, images were projected onto the state television building that had never been broadcast – "counter-images" in the literal sense, an attempt to show how it "really" is. This appears to be the order of the day, and "No time for art" is also the name of a documentary theatre production by the young Egyptian director Leila Soliman, shown last year.

But a parallel process is also beginning to emerge, an explosion of creativity carried by a great need for cultural self-assertion. And in dictatorships, beauty is also lost along with freedom. Young bands are being formed, new plays and numerous films are being made all over the place, and this will certainly herald a revived interest in one's own history. But there are too few cultural centres, theatres and rehearsal rooms. The cultural infrastructure is insufficient, and investment is essential here.

There is also a lack of know-how. Professional cultural managers, for example, are in short supply. This is where international cultural work can provide a useful service. And these are the main focal points of the cultural "transformation partnership" that the German Foreign Office has agreed with Egypt.

What do Arab creative artists expect from Germany and Europe?

Hasenkamp: That someone listens to them – that is what we have noted. That the West is upfront about its long-term support of Arab dictatorships. That there is no "academic tourism", where curators and scientists fly in and treat Arab cultural activists solely as a vehicle for the promotion of their own interests and the distribution of their own work. People finally want self-determination – also with respect to the rest of the world. And people want mobility – isolation is a thing of the past.

Political analyst Taqadum al-Khatib argues that Egypt can, in co-ordination with its European partners, develop a common vision to solve the complex conflict in Libya. For this to ... END_OF_DOCUMENT_TOKEN_TO_BE_REPLACED

The upheavals of the past year in the MENA region are arguably as momentous as those of the Arab Spring in 2011. Yet perhaps the biggest difference is that our interest seems to ... END_OF_DOCUMENT_TOKEN_TO_BE_REPLACED

In 2019, the long-running Penguin Classics series released its first novel translated from Arabic: Tawfiq al-Hakim’s "Return of the Spirit", conveyed into English by William ... END_OF_DOCUMENT_TOKEN_TO_BE_REPLACED

Equality in divorce, a ban on polygamy: reformers of Islamic family law have a clear agenda. They are exploiting the ambiguity of traditional jurisprudence. By Joseph Croitoru END_OF_DOCUMENT_TOKEN_TO_BE_REPLACED