The Cyprus Conflict
Disputed Bridge in Nicosia's No Man's Land

Two years after the rejection of the Annan Plan by the Greek Cypriots, a solution is still not in sight. Amalia van Gent traces the history of the conflict and reports on a newly built blue bridge at Ledra Street, a symbol of the Cypriot conflict 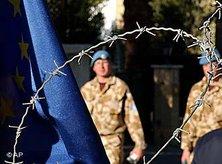 The war of 1974, which came about following a putsch engineered by the military junta in Athens and the subsequent invasion of the Turkish army, solidified the island's division

​​The military border checkpoint in the Greek part of the Cypriot capital of Nicosia is marked with a warlike inscription: "No Freedom without Bloodshed" is written there in giant letters. And: "Nicosia: Europe's last divided capital."

A high, insurmountable wall blocks the route heading toward the Turkish-controlled north. Ledra Street lies south of the wall. Thanks to its chic shops and cafés, it is one of the capital's most popular shopping promenades. The contrast between it, the wall, and the visible traces of war, is profound.

Ledra Street mirrors the history of this Mediterranean island. Fifty years ago, Greek Cypriot Eoka guerillas fought a war of independence against British colonial rule and murdered British soldiers, who felt secure between the colonial houses of beige sandstone on Nicosia's central avenue. For good reason, it became known in London at the time as the "Murder Mile".

When, in 1958, the Greek Cypriot majority decided in favor of a union with Greece, and the Turkish Cypriot minority rejected the idea, barbed wire barriers dividing Ledra Street into a southern, Greek section and a northern, Turkish section were erected for the first time.

After the 1963 civil war, barricades replaced the barbed wire. Eventually, the war of 1974, which came about following a putsch engineered by the military junta in Athens and the subsequent invasion of the Turkish army, solidified the division. A so-called "green line" reinforced with sand bags and barbed wire passes through Nicosia's old city center and through all of Cyprus.

"Rid Cyprus of its barriers"

Last winter, a few young activists on both sides of the wall decided to bring about the opening of Ledra Street by force. "Rid Cyprus of its barriers" was their slogan. Their goal was to rebel against the pigheadedness of politicians, who make solving the Cyprus conflict impossible, according to the Greek Cypriot activist Valentina Sofokleous.

Both mayors of the divided capital, as well as local businessmen, got caught up in this wave of youthful exuberance. The Turkish side began with the removal of the barbed wire and sand bags, and this fostered hopes that all the barbed wire barriers could be removed from the divided city.

Why the leadership of the island's Turks ordered the construction of a short, odd-looking bridge of concrete, metal and glass directly at the No Man's Land is disputed. The Turkish army, which controls the demarcation line, didn't want any tourists there, say Turkish opposition politicians. For the government, who were in favor of opening Ledra Street, building the bridge was a compromise.

However, the government representing the island's Greeks used the construction of the bridge as an opportunity to make claims about illegal movements of the Turkish army across the line of demarcation.

Looking north from the Greek Cypriot border posts, one now sees an almost 1000-meter-wide strip of No Man's Land with deserted ruins, and a brand new blue bridge leading to nowhere.

The blue bridge at Ledra Street is a symbol of the Cypriot conflict. Following the rejection of the Annan Plan by the Greek Cypriots, a solution is not in sight.

According to the motto "Territories in exchange for political competencies," Kofi Annan's plan was intended to have the Turkish side return some of the territories occupied by the Turkish army since 1974 to the island's Greeks. In turn, the Greek-dominated government would be required to dissolve the internationally recognized Republic of Cyprus and to share governing power with the island's Turks in a newly founded state anchored in the EU.

In a referendum in April 2004, an overwhelming majority of the island's Turks voted for the plan. In EU membership, they hoped for an end to the isolation under which the diplomatically unrecognized north has been living since 1974. But dissolving their republic, bearing most of the costs for the Turkish invasion and, above all, accepting Turkey as a governing power in a newly formed state seemed too high a price to pay for the island's Greek population. They rejected the plan.

Since then, Nicosia has been referring to a "policy of small steps." More than anything, that means maintaining the status quo. President Papadopoulos, a hardliner, does not consider solving the Cyprus conflict to be a priority. He also believes that, thanks to membership in the EU, Cyprus is strong enough to stand up against Turkey's demands.

Meanwhile, Turkey also no longer appears in any hurry to find a solution. Ankara's primary concern is that Cyprus does not become an obstacle on its own path to the EU. In late January, however, the island threatened to become just that. At the time, the Turkish government announced that it would not open its harbors or airports for Cypriot ships or airplanes. Cyprus is a member of the EU, and as an EU candidate, Turkey is required to open its ports to member states.

Ankara will refuse to comply with this requirement as long as the EU does not engage in direct trade with the northern, Turkish part of the island, announced Turkish Foreign Minister Abdullah Gül.

But Nicosia wants to prevent the commencement of direct trade relations with the north. It fears this could be the first step to official international recognition of the Turkish Cypriot state. The Papadopoulos government spoke of a "Taiwanisation of Northern Cyprus" and

Mustafa Akinci, supporter of Cypriot reunification and Chairman of the Peace and Democracy Movement

​​threatened to block the EU accession negotiations with Turkey, scheduled to get underway this spring, with a veto.

In late February, the EU made financial aid available totaling 139 million euros to the poor, Turkish north. The issue of commencement of direct trade relations was put aside without comment. The Turkish reaction to this decision was astonishingly calm. Cyprus's veto threat was also tacitly ignored.

At the headquarters of the left-leaning, liberal Greek Cypriot daily newspaper "Politis" there is now talk of an "Anatolian horse trade" and a "brilliant act of Byzantine diplomacy". "Politis" is regarded as the mouthpiece for those island Greeks (25% of all Greek Cypriots) who voted in favor of the Annan Plan and for the reunification of their divided homeland two years ago. Today, they are completely demoralized.

In the north, the perspective of EU membership together with the southern part of the island had gathered such steam in 2004 that, completely unexpectedly, long-time ruler Rauf Denktash was knocked from his pedestal.

Lelos Dimitriadis. Together with Mustafa Akinci, he outlined a plan that called for the opening of Ledra Street

​​One committed supporter of Cypriot reunification is Mustafa Akinci, Chairman of the Peace and Democracy Movement (BDH), a small organization that is nonetheless influential in intellectual circles. He sees no cause for optimism, he says dejectedly in conversation. For 14 years in the difficult period following the Turkish invasion, Akinci was mayor of the Turkish northern section of Nicosia.

Inspired by the vision of reunification, he and his Greek Cypriot counterpart Lelos Dimitriadis outlined a plan that also called for the opening of Ledra Street. At the time, the street was turned into a pedestrian area on both sides of the demarcation line. "We wanted to turn the heart of the unified old city of Nicosia into an auto-free city center of European standards with a high quality of life."

Since the blue bridge stands in the way of realizing this dream, Akinci now suggests demilitarizing the old city center. Young people have already launched a campaign for a demilitarized Nicosia. Whether or not they can get large sections of the population behind them, as occurred in 2004, remains to be seen.

This text was previously published by the Swiss daily Neue Zürcher Zeitung.

Cyprus
Greek Cypriot Leader Rejects Peace Plan
In a fresh blow to the Cyprus peace process, Greek Cypriot leader Tassos Papadopoulos has urged voters to reject a U.N. plan to reunify the island in a referendum later this month

Cyprus
Celebrating a Dubious Birthday
Thirty years after Turkey invaded it, Cyprus remains a divided island. The Greek side is now part of the EU, but the northern Turkish half still suffers economic isolation despite UN and Brussels' efforts to reunite it. A background report by Rainer Sollich

EU Accession Negotiations with Turkey
Erdogan's Obstacle Course towards Joining the European Union
Now that the EU has officially announced the start of accession negotiations, the Turkish leadership must now prove that it can resolve the many obstacles facing its EU membership. These range from the Cyprus and Armenian issues to a guarantee of democratic basic rights. Ömer Erzeren summarizes the sticking points

END_OF_DOCUMENT_TOKEN_TO_BE_REPLACED
Social media
and networks
Subscribe to our
newsletter