Skip to main content
The Debate on Islam and the Enlightenment

For Conflict Resolution without Self-Righteousness

"Enlightenment" and "the clash of civilizations" are buzzwords that we often hear in the debate on the relationship between the cultures of Islam and Western Europe. In view of the current conflicts in this area, Stefan Weidner advocates a cultural rivalry without "Enlightenment fanaticism"

"The contention that Islam has no Enlightenment has become the argument par excellence of the clash of cultures," says Stefan Weidner

​​Does the clash of civilizations even exist? Despite the heated dispute on Islam, despite the wars in Iraq, Afghanistan and on the Israeli border, it appears that the clash of civilizations is, in fact, a dispute over the term "cultural clash" itself. Particularly in the moderate, Islam-friendly camp and among appeasers, there are many who continuously stress that this clash actually does not exist.

From a conflict with real problems – how does Western society deal with Muslims and Islam? – the front has shifted to the realm of mere differences of opinion over whether the word "clash" is appropriate in view of these problems.

The metaphor of a clash of civilizations, however, gives us much more than most people are generally prepared to admit. Instead of a bloody carnage, we could see this as a competition among ideas, as a contest on a symbolic level. We could also view this as a clash of words, a trial with ongoing final summations before the jury and the international community. Or a competition of cultural ideas in the broadest possible sense: political, social, economic, religious and ideological.

No merging without a clash

Those who content themselves with the simple statement that the clash does not exist risk being suspected of trying to delegitimize this contest of ideas over how best to live our lives. They could be accused of trying to iron out the differences or of presenting their own – for the time being unspoken – views of the dispute as the ultimately valid approach.

​​Such an attitude, which is common among columnists, politicians, religious leaders and others who love to gloss over topics, is at least paternalistic. At worst, it discredits every alternative position as potential warmongering.

Even if we prefer not to underscore cultural differences, there can be no merging without a clash. There is little support for the assumption that the majority of people would, of their own volition, seek input from other cultures. This might be true of individuals, but large populations react more slowly. Those who support a merging of cultures and advocate mutual enrichment may not shy away from or exclude this clash of ideas; in fact, they will embrace it as the driving force behind the fusion.

The struggle over the real image of Islam, especially when it is led by Western opinion makers and the media, in fact often overshadows a struggle over the real image of the West. It is not so much a matter of putting what is foreign in its place, but rather controlling what is foreign within our own culture. This can be witnessed in the surprising renaissance of the buzzword Enlightenment.

The last time this was an issue was 20 years ago, when we sought to defend our traditional values against an onslaught of post-modern disorder from France. Now the contention that Islam has no Enlightenment has become the argument par excellence of the clash of cultures, and by no means just among intellectuals, but also in the letters-to-the-editor columns of newspapers.

Is it true that Islam knows no Enlightenment? The answer depends on how we define Enlightenment. If we limit this to the phenomena which accompanied its emergence in Europe, we will naturally have difficulties finding something similar in the Islamic world. Yet this is precisely what we are doing, and by restricting the term Enlightenment to a purely European phenomenon, Islam becomes essentialistically pigeonholed: Thus Islam, by definition, is a religion which knows no Enlightenment. 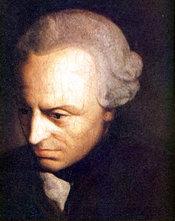 Enlightenment based on the ethics of self-criticism: Immanuel Kant in an 18th century painting

​​The circular reasoning contained in this conclusion is so obvious that it can easily be overlooked. If we search for an Enlightenment outside of Europe, we have to admit that some type of Enlightenment could exist which is not simply based on the separation of church and state and cannot generally be boiled down to religious criticism.

Even in its origins in the Europe of the 18th century, the Enlightenment consisted of far more than mere religious criticism. Although Emmanuel Kant practices religious criticism, and he feels that we must abolish religious paternalism to become enlightened, a closer examination of his definition of Enlightenment reveals that it is based on the ethics of self-criticism. "The need for tutelage is the inability to use one's intellect without guidance from someone else."

If we reduce the Enlightenment to religious criticism, then it becomes a suitable instrument which can be used in the cultural clash with Islam, and the following devastating conclusions become obvious: Islam knows no Enlightenment. Hence, Muslims are in need of tutelage. Hence, they require a guardian.

It is this logic which has justified the supremacy of the European colonial powers as well as today's American-European guardianship in Iraq and Afghanistan. Those who, without further ado, equate the West, and their own positions, with the Enlightenment, also turn a blind eye to European history well into the 20th century, a period which is certainly not a shining example of the ideals of the Enlightenment.

Enlightenment is an individual matter

​​There is no need to delve deeply into the intellectual musings of Max Horkheimer and Theodor Adorno's "Dialectic of Enlightenment" to expose the notion that – "we are the enlightened," and the others, by contrast, are "the unenlightened" – is a fairly self-righteous approach. We need only glance at Kant's famous essay "Answering the Question: What Is Enlightenment?" There we can read the following (and to make the text fully up-to-date, we have inserted a couple of modern additions):

"It is so easy to be in need of tutelage. If I have a book that contains common sense, a TV that blabs away for me, a religious leader for my conscience, an analyst who thinks about my problems, a doctor who evaluates my diet, I don't have to make an effort myself. I don't need to think as long as I am able to pay; others can deal with this annoying business for me."

Each of us can best decide for ourselves to what extent such paternalistic relationships still concern us today. We may thus venture to assert that the use of the term Enlightenment in an intercultural context is absolute nonsense. In the name of the Enlightenment it is possible to criticize everything and anyone, Islam as well as the pope, the American Indians as well as our neighbours – or, something which best reflects the spirit of the Enlightenment, ourselves.

Stefan Weidner is a translator and editor who lives in Cologne. His most recent book "Manual for the Clash of Civilizations. Why Islam Is a Challenge" has recently been published in German by Verlag der Weltreligionen.

Interview with Olivier Roy
Muslim Radicals Are Perfectly "Westernised"
Olivier Roy is one of the most renowned experts on political Islam. In this interview with Michael Hesse, he talks about religious fundamentalism, Islam in Europe, and explains why the Muslim middle classes in the West ought to be recognized as a western faith community, not as an alien culture

Islam and Enlightenment
Of Culture Clash and Constitution
A spurious polarity has emerged from the current debate on Islam: it places the Enlightenment on one side, the Muslims on the other. Evidently a case of historical amnesia. By Zafer Şenocak

END_OF_DOCUMENT_TOKEN_TO_BE_REPLACED
Social media
and networks
Subscribe to our
newsletter