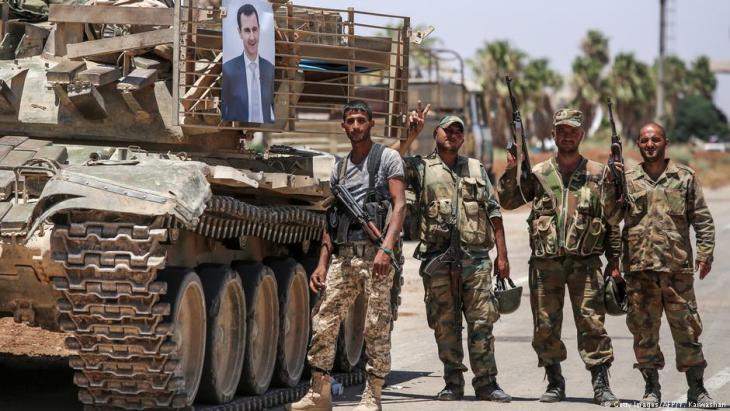 At the mercy of Assadʹs troops

While Berlin was contemplating secure borders, the Syrian regime embarked on its next campaign to exacerbate the suffering of refugees. To Syriaʹs President Bashar al-Assad, they are nothing more than a weapon. By Bente Scheller

The agenda of German chancellor Angela Merkel during her official visit to Jordan and Lebanon in mid-June was dominated by refugee-related issues. While she established that working towards the return of Syrian refugees is the aim of all parties involved, such a return could only be considered once safe conditions had been created for them. She had yet to board the plane back to Berlin when the Syrian regime launched its next major military offensive. The target this time: the province of Daraa in the south of Syria.

Daraa had been deemed the calmest of the four so-called de-escalation zones set up by Russia, Iran and Turkey in Astana in 2017. The ceasefire agreed upon by the U.S., Russia and Jordan precisely one year previously had no doubt played a significant role. The end of these de-escalation zones, however, was heralded with the approach of the World Cup in Russia, with the U.S. warning rebels in Daraa not to react to "provocations", while at the same time dismissing any expectation of assistance from the United States.

Shortly after, Russian president Vladimir Putin declared a unilateral end to the ceasefire. The Syrian air force launched a series of massive bomb attacks in pursuit of Bashar al-Assadʹs goal to promote the fragmentation of rebel territory and to push towards the Jordanian border crossing.

Assadʹs ally, Russia, previously reluctant to fly attacks over that particular region, was soon participating in the aerial bombings. Within just two weeks, more than a quarter of a million people had fled. Up until then, they had chosen not to leave, despite the lack of prospects in their situation – yet now they are trapped. Neither Israel nor Jordan is prepared to open its borders.

Surrender is not enough for the regime

The pity is that it was precisely this region that would have been passable for civilians, even without the introduction of substantial protective measures. "Daraa is a prime example of something in Syria that should have been supported and protected," filmmaker and activist Orwa Mokdad explains. "Neither IS nor other extremist groups have been able to gain a foothold here" – at least not to the extent that they did in the north of the country. "The uprising here has always been a local matter." 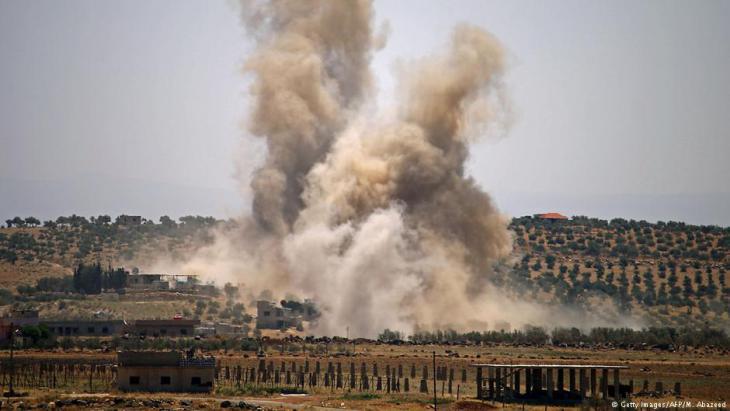 No mercy towards the Syrian population: once again, Assad is employing the same old tactics. Area bombings and targeted attacks on civil institutions such as hospitals and schools are intended to aggravate the suffering of the civilian population, to a point where local councils are forced to surrender. In light of the military advantage of the regime and its supporters, it is clear that the rebels stand no chance

That is the reason there are so many more fighters in Daraa than in other regions – fighters who defend their localities and therefore enjoy far more backing from their communities than is the case elsewhere. Furthermore, their mere numbers suggest that a transfer to Idlib would be unrealistic.

We are witnessing typical regime tactics: area bombings and targeted attacks on civil institutions like hospitals and schools are intended to aggravate the suffering of the civilian population, to a point where local councils are forced to surrender. In light of the military advantage of the regime and its supporters, it is clear that the rebels stand no chance.

Yet they have good reason for refusing to give in before arriving at the ultimate escalation: experience across Syria has shown that the regime is not capable of being satisfied. A surrender – cynically referred to as a "reconciliation agreement" by the regime – is not enough. Instead, the regime seeks revenge on those it has defeated. To that end, it is known to have de-populated entire cities. A return of residents is not planned. Instead, the campaigns form part of a brutally enforced demographic restructuring.

More afraid of Assadʹs militias than the daily bombing raids

And so the persecution continues. "The most recent examples reported come from several places in Daraa province. In contravention of an existing agreement, the regime chose to execute fighters of the Free Syrian Army immediately once they had captured one of the localities. In another case, the bombings simply continued."

As long as there are no guarantees to ensure that agreements are adhered to, many cannot hope to be spared. They fear the physical presence of the regime and its militias more than the bombings they are subjected to daily.

"As well as demanding that all weapons be turned in, the Russian negotiators are also insisting on lists bearing the names of all Free Syrian Army members," says Mokdad. That alone suggests to many that they will either be arrested, subjected to relentless persecution, or will become targets for forcible recruitment for the next front – the northern province of Idlib.

Germany's foreign policy is explicitly values-based. But what happens, Ralf Bosen asks, when democracy, the rule of law and human rights collide with the logic of trade and ... END_OF_DOCUMENT_TOKEN_TO_BE_REPLACED

No other Western poet was arguably so well-versed in the Koran or so fascinated by Islam as Germany's national hero, Goethe. In a new publication that examines all Goethe's ... END_OF_DOCUMENT_TOKEN_TO_BE_REPLACED

A deluge of books, movies, series and cover stories: ever since the events of 9/11, the West has seemed almost manically preoccupied with Islam. Yet this has rarely led to deeper ... END_OF_DOCUMENT_TOKEN_TO_BE_REPLACED

Twenty years after 9/11, the world is faced with the dual challenge of Islamophobia and anti-Westernism. Ahmet Kuru argues that Muslims in the West, well versed in both Western ... END_OF_DOCUMENT_TOKEN_TO_BE_REPLACED

Two decades after the attacks of 11 September 2001, the West faces the shattered debris of its failure – not only in Afghanistan, but also in Iraq, Syria, Libya and Yemen. What ... END_OF_DOCUMENT_TOKEN_TO_BE_REPLACED

Twenty years after 9/11, the United States is recalibrating its war policy. However, its assertions that the era of endless wars is over are a myth, writes Maha Hilal END_OF_DOCUMENT_TOKEN_TO_BE_REPLACED
Author:
Bente Scheller
Date:
Mail:
Send via mail

END_OF_DOCUMENT_TOKEN_TO_BE_REPLACED
Social media
and networks
Subscribe to our
newsletter