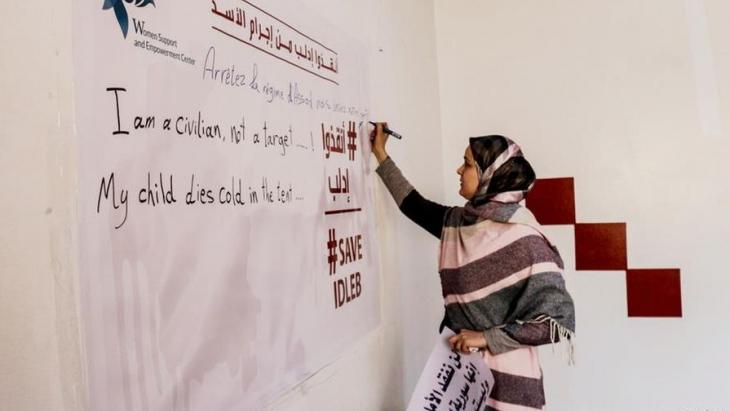 The battle for Idlib is likely to be the last, bloody conflict in the Syrian war. Refugees have fled the city in droves, but Huda Khayti is determined to stay and fight for her Syria – using peaceful means. Diana Hodali reports

"I'll call you back later," says a hurried Huda Khayti as she cuts short our interview on the situation in Idlib. Then she hangs up. This is how our communication has been going for days, as bombs – dropped by Syrian government forces – rain down on Idlib. Khayti, the director of the Women Support and Empowerment Center Idlib, promises to find a new place to call from, one she hopes will be safer.

This happens repeatedly, several times a day. Finally, hours later, the phone rings again and she tells me she is fine.

"That's the way life is in Idlib, in both the city and across the whole region. It has been that way for years. No one is safe here. But I have a good network," the 40-year-old Syrian says. "We have a kind of early warning system for air raids – we can literally smell the bombs and we can pretty well tell where they will hit."

Opposed to the Assad regime

Khayti has lived in Idlib since the spring of 2018. At the time, all those opposed to the Syrian government, whether members of the democratic opposition or militant rebels, were brought to Idlib province – controlled by the Islamist group Hayat Tahrir al-Sham – far away from the Assad regime.

"I had never been to Idlib. I had no idea what to expect," says the women's rights activist. But she knew it was just a matter of time before Syrian President Bashar Assad – bolstered by Russia and Iran – would try to capture the last rebel stronghold in Syria. Neighbouring Turkey, on the other hand, has thrown its weight behind Assad's adversaries.

Since Syrian and Russian forces began their offensive on Idlib last December, some 900,000 people have fled the province, most of them women and children. Today, people continue to abandon their homes and their villages. Roads leading north to neighbouring Turkey are jammed with cars full of people forced to flee for their safety, some for the third or fourth time. It seems the fight for Idlib is destined to be the last bloody battle of the Syrian civil war. 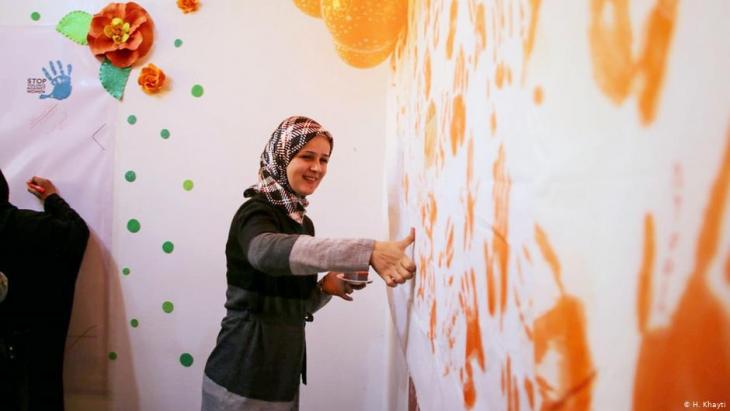 For a democratic Syria: from the outset of the uprising, women's rights activist Huda Khayti was against Assad and for regime change. She says the revolution also deepened her understanding of civil rights and women's autonomy. "I truly believe it was right to stand up and protest"

Khayti got a taste of just how gruesome such battles can be back in her hometown of Duma, and then in eastern Ghouta, outside Damascus.

"I'm from Duma. I survived one of the regime's poison gas attacks. I know what it's like to live and cower under a hail of bombs," she says. "But every bomb they drop on us here in Idlib only steels my resolve, and confirms to me that it was right to stay here and fight for Syria and for the Women's Center."

From Ghouta to Idlib

Khayti grew up in Duma before moving to Damascus to study French literature. She says her own personal revolution began in 2011 when she realised Assad's government was restricting women's rights and bullying its own people. It was then that she started three women's centres in eastern Ghouta, where women could take workshops on a number of different subjects ranging from gender-based violence and first aid to English and women's rights.

She says all of the centres in eastern Ghouta were bombed. One of those bombings killed a colleague and her child. Khayti's brother was also killed, devastating her and her family. Her voice becomes melancholy as she speaks of her family: "We did a lot together – we ate together, we depended on one another – we were all very close." These days her parents, six sisters and one surviving brother are spread out across the globe, with some in Turkey and others in Canada.

Reading Hassan Blasim's God 99 is an immersive experience of grief and exaltation, anger and disgust, writes Marcia Lynx Qualey. We join the Iraqi narrator as he sits around in ... END_OF_DOCUMENT_TOKEN_TO_BE_REPLACED

Turkey's parliamentary and presidential elections are scheduled for June 2023. But they are already casting a shadow. While the opposition is calling for early elections, ... END_OF_DOCUMENT_TOKEN_TO_BE_REPLACED

Recep Tayyip Erdogan, disappointed by the European Union’s reluctance to integrate Turkey into its ranks, has re-directed his country’s diplomacy toward the Maghreb and Africa to ... END_OF_DOCUMENT_TOKEN_TO_BE_REPLACED

A law is currently being debated in Morocco that would legalise the cultivation and export of medicinal cannabis. For many small farmers, this would bring considerable advantages ... END_OF_DOCUMENT_TOKEN_TO_BE_REPLACED

Philosopher Juergen Habermas was due to be awarded a major Arab prize in Abu Dhabi, but has turned it down following criticism. This decision torpedoes Arab efforts at a ... END_OF_DOCUMENT_TOKEN_TO_BE_REPLACED
Author:
Diana Hodali
Date:
Mail:
Send via mail

END_OF_DOCUMENT_TOKEN_TO_BE_REPLACED
Social media
and networks
Subscribe to our
newsletter