Seven years ago Taliban militias in Afghanistan destroyed the two largest standing Buddha statues in the world. The shrine at Bamiyan was part of our world cultural heritage, and the international public outcry was enormous – but the loss was worst of all for the art and history of Afghanistan. Nasim Saber reports 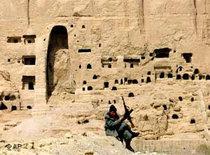 The Buddhas of Bamiyan: evidence of Afghanistan's pre-Islamic period. The Taliban weren't the first to attack the statues - they had already been ravaged in the 17th century

​​Seven years ago, on March 12, 2001, Taliban militias dynamited the Buddha statues of Bamiyan on the orders of Mullah Omar, leader of the Taliban and at the time de facto Afghanistan head of state. For nearly a whole month leading up to the event, the Taliban had attempted in vain to destroy the Buddhas using tanks, cannons and rockets.

The Taliban are iconoclasts – the depiction of human forms is considered an act of presumption tantamount to humans placing themselves on equal standing with God, the Creator. The destruction of the statues was also a way of obliterating the insignia of the non-Islamic or pre-Islamic cultural tradition of Afghanistan.

Along with the statues, the Taliban also destroyed almost all of the exhibits in the National Museum in Kabul that stemmed from the country's Buddhist days.

One of the world's most important hybrid cultures

Located in central Afghanistan, Bamiyan was once one of the major Buddhist centers along the Silk Road, the ancient trade route between Asia and Europe. The symbiosis of Hellenic and Buddhist traditions plays a special role in the artistic style of Gandhara, the ancient region once located where today the border runs between Afghanistan and Pakistan. This style could be seen clearly in the huge Buddha figures.

In Gandhara, Greek artists and craftsmen encountered a pictorial vocabulary and culture shaped by Buddhism.

​​Buildings, frescoes, sculptures and reliefs reveal a wide variety of artistic influences, which came together here to form a symbiosis that gave birth to a completely new and singular formal language. There thus evolved in Gandhara during the 1st to 5th centuries one of the most important hybrid civilizations in the world. Precious materials in brilliant colors were used to create shrines and representations of deities.

There were originally six Buddha figures in the Bamiyan Valley, three large and three small ones, some of them inside the caves. The big 55-meter-tall Buddha statue was situated to the west, a seated, 8-meter Buddha was at the center of the complex and a further 38-meter-tall Buddha statue stood at the eastern rock face. This statue dated from the 4th to 5th century A.D. It was originally painted blue and its face was decorated with gold leaf.

The two large Buddha statues wore robes modeled on a Greco-Roman toga. The sophisticated numeric symbolism on which the statues’ dimensions were based indicates how advanced the civilization was that created these artworks.

The fact that the statues could be erected at all is owing to trade along the Silk Route, which brought wealth to the region and provided it with the necessary means to realize a sacred structure of such monumental proportions.

The biggest Buddha of all time 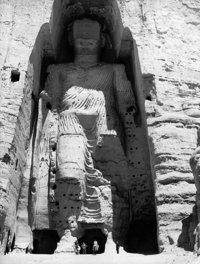 The Buddhas of Bamiyan are UNESCO World Heritage Site

​​The reclining Buddha figure that was apparently once built here is mentioned only in the travel journals of the Chinese monk Xuanzang. No trace of it has ever been discovered. It was supposedly over 300 meters long and depicted the Buddha Mahaparinirvana, i.e. the Buddha that achieved Nirvana.

Zemaryalai Tarzi, an internationally renowned Afghan archeologist, has been searching for this statue for years with his French team. The reclining Buddha of Bamiyan – should it ever be found – would be the biggest Buddha statue of all time, and a major sensation.

The Taliban were not the first to vandalize this cultural site – the Buddhas already fell victim to iconoclasm in the 17th century. People stole the jewelry adorning the statues and made off with the gold leaf. One can assume that religious motives were fueled here by economic greed.

Nevertheless, the site remained a tourist attraction up until the Soviet occupation. During the war the caves were used as a munitions arsenal – the valley was strategically important, and Soviets and Taliban, the latter equipped with American weapons, engaged in pitched battles here.

When the Taliban then detonated the two big Buddha statues seven years ago, the act sparked a wave of worldwide horror and indignation. The destruction of the site was a bitter loss for the art and culture of Afghanistan as well as for the whole region.

A few countries and a number of prominent organizations already started making plans to rebuild the statues shortly after their destruction. Paradoxically, the world public only really became aware of the existence of the Buddha statues after they had been blown up.

Switzerland, along with Japan, ever generous when it comes to development aid, have promised to make funding available for the reconstruction of the statues.

Furthermore, since March 2004 a team of restorers from the German division of the International Council on Monuments and Sites, financed by the German Foreign Office, has been working on recovering and documenting the stone fragments. The reconstruction is to be based on data collected by cartographer Robert Koska, who measured the statues for the University of Graz before the Soviets marched into Afghanistan.

In the meantime, however, critical voices have been raised against the restoration plans – many pointing out that the huge sums involved would be better spent on humanitarian aid. Whatever happens, the fact is that the country is still very much dependent on foreign support, and the international community must not leave the war-ravaged Afghans to cope with the aftermath of these events on their own.

Security Situation in Afghanistan
More Faith in the Taliban than in the Government?
The Taliban's attacks are no longer restricted to targets in the South and East of the country. Moreover, as Ratbil Shamel reports, their numbers have recently been swelled by dissatisfied police officers and soldiers who have deserted their posts

Journalists in Afghanistan
Reporting Between the Lines
Nowadays, Afghan journalists risk life and limb when it comes to reporting objectively on the deplorable state of affairs in their country. Not only the Taliban, but also the pro-Western government tends to see courageous journalists as enemies. Ratbil Shamel and Najibullah Zeyarmal report

END_OF_DOCUMENT_TOKEN_TO_BE_REPLACED
Social media
and networks
Subscribe to our
newsletter