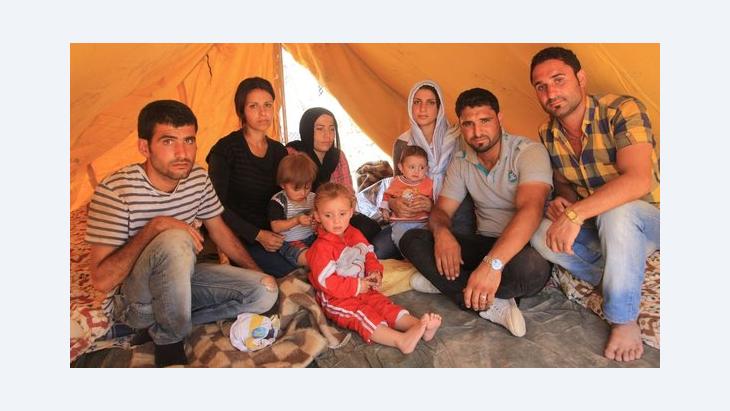 ﻿Syrian refugees are flocking in ever-greater numbers to the neighbouring countries, fleeing from the violence at home. In the Domiz refugee camp in northern Iraqi, 700 new people arrive every day. But the United Nations refugee agency UNHCR and the Kurdish autonomy government are unable to provide for them. A report by Jan Kuhlmann

Dust, everywhere dust. That's the first thing Rangin sees in the morning when he peers out of the tent, and the last thing burning in his eyes before he falls asleep at night on a mattress on the ground. On this morning, too, each gust of wind turns the air in the Domiz refugee camp into a brown cloud of dust. Up in the sky the sun blazes down, even now, in early September. It feels as if it is branding the dust right into the skin.

Dust is sand broken down into its smallest fragments before it blows away. Just like Rangin's old life as a tailor in Damascus. Nothing much remains of that, either.

The Domiz Syrian refugee camp in the Kurdish territories in northern Iraq is a sad place. Tent after tent is lined up along the paths, all bearing the faded inscription "UNHCR". Men, women and children squat inside, seeking shelter from the sun and not knowing anymore what life will bring. The violence in Syria has forced countless Kurds to seek refuge in Domiz, and a whole town has grown up here in the past few weeks. And it's growing by the day. 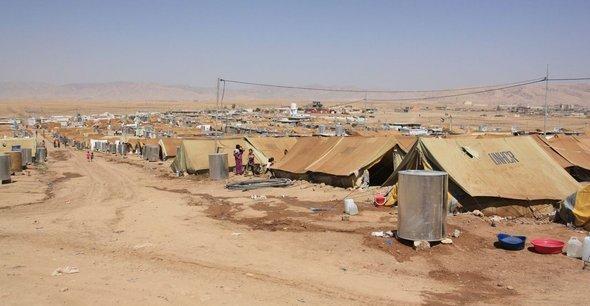 Boundless misery: More than 27,000 Syrian refugees live at close quarters in Camp Domiz alone, near the city of Dohuk. There is a shortage of food, tents and sanitary facilities

​​Young men run around selling cigarettes and phone cards, loudly hawking their wares. Every now and then a helicopter flies by overhead. Trucks drive through the entrance gate, bringing the most important thing that's missing here: fresh drinking water. Someone wanted to do something nice for children and set up two pieces of playground equipment: a seesaw and slide. The slide is full of sand, the seesaw rusted. Perhaps whoever it was just wanted to get rid of some old junk.

On this particular morning, Rangin – 25 years old, sturdily built, sporting a fashionable beard – makes his way to the office containers at the entrance to the camp to try to get something to eat, or maybe a few blankets. But the young Kurd is just as unsuccessful as the other men who are standing around. Their faces are gaunt, their eyes weary. Some have placed towels on their heads for protection from the sun.

On the run from Assad's minions

"We have fled from the Assad regime," says Amin, a burly man with a booming bass voice who walks on crutches due to a crippled leg. "The regime kills everyone: Arabs, Kurds, everyone." Amin is wearing a t-shirt with a German flag on it.

Rangin is about to return to the tent where he has found shelter with his family when suddenly an elderly woman appears out of nowhere. She has tears in her eyes. "Nobody is helping us, nobody has given us anything," she says, her voice breaking. "We are eight people and we have nothing. I have been here for four days here and am still living in the road." Then she can no longer hold back the flood of tears; she turns away and disappears again.

Rangin climbs over a makeshift wall of sand and runs to his tent. A few metres away there was evidently once a football pitch. All that's left are the goal posts. Crouching in Rangin's tent are his wife, his two-year-old daughter and the other relatives who fled with him. Three mattresses fit in the tent. Three mattresses for six adults and three small children. 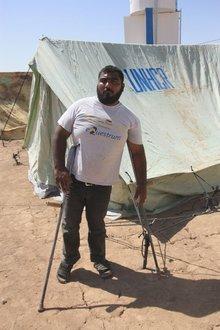 "The regime kills everyone: Arabs, Kurds, everyone." Kurdish refugee Amin at the Domiz refugee camp

​​ Rangin and his family lived on the outskirts of Damascus. First the rebels came and captured the area. Then the regime sent in airplanes and bombs. "They levelled our house," says Rangin in a hoarse tone. His brother died. He was a civilian. "We had to leave everything behind."

They fled by car to the border in northern Syria and then continued on foot. On the Iraqi side, the Peshmerga came to their aid. The refugees in Domiz have only good things to say about the Kurdish fighters in Iraq.

Rangin and his relatives had hoped to find not only safety in Domiz, but also assistance. As it turns out, they may be safe here, but help is a rare commodity. The camp has a shortage of showers and toilets. They have now been here a week. For days they have not been able to wash and have had nothing to eat, says Rangin.

"Our children are very hungry. We have nothing to eat and no money, either." And to show that he is left with nothing, he pulls out his wallet. It contains nothing but a few Syrian lira notes.

He walks a few steps further to a second tent that was actually also assigned to his family. It consists of nothing but tatters, and when he opens the flap, the pungent odour takes one's breath away. No one can live in this tent.
It is hard to understand why an organisation as large as the UNHCR is unable to provide for the refugees. Is there a shortage of money, of structures, of will? The questions remain unanswered on this Friday, at least by the UN refugee agency. The weekend is here. So the organisation's office is closed. Misery or no. Rangin is outraged. "We thought the UN would help us," he grumbles. "But it's not doing its work."

At least Abdullah Hamo, a man with a round belly, has some answers at the ready. He has just returned to his office after a tour of the camp and is sitting at a desk that is covered with a fine layer of dust. The room, housed in an office container, is dark, and the air conditioning has gone silent – a power failure.
Until recently, says Hamo, head of the Kurdish autonomy government’s immigration agency, there were no problems here at the camp.

"Everything went smoothly; we had a plan." But then came Ramadan, the Muslim month of fasting, and with it an escalation of the violence in Syria. The number of refugees has grown dramatically. Hamo takes a sheet of paper and draws figures and arrows that rise steeply upward: until mid-August, 50 Syrians a day arrived at Domiz, then the number increased to over 200. "Now there are 700 every day," he moans. "The situation has gotten out of control."

Hamo walks into the road and enters the part of the camp that has been developed a bit further. Here he had builders put up houses of grey stone. "All of them with a toilet, shower and kitchen," says Hamo. These houses may offer more than the crowded tents – and yet they look more like dark holes. A few metres further down the road, someone is hammering an iron bar into the ground to build a satellite antenna. Television could bring a little bit of diversion to the monotonous life in the camp.

Intrigues of the regional players

Before Hamo takes his leave, he rails at the Iraqi central government. "They have given us no help whatsoever," he says. "They are completely uninterested." The Syrian conflict is just one of many points of contention between Baghdad and the Kurdish autonomy government in Erbil. The central government with the Shiite Nouri al-Maliki at the helm has officially declared neutrality, but secretly supports the Assad regime. It can be reproached with allowing arms transports from Iran to breach the Iraqi airspace. 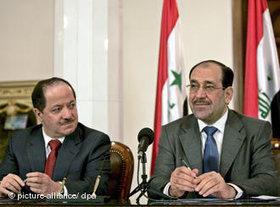 Political tug of war in the Syrian conflict: Iraqi Prime Minister Nouri al-Maliki has officially declared neutrality, but supports the Assad regime, while Kurdish President Massoud Barzani is trying to assert himself as head of the Syrian Kurds as well

​​Meanwhile, Kurdish President Massoud Barzani is trying to assert himself as head not only of the Iraqi Kurds but of those in Syria as well. At the end of July he admitted in an interview that he is providing military training for Syrian Kurds. Under his auspices, various parties have merged to form the Kurdish National Council (KNC).

And recently Barzani succeeded in committing the KNC and the Syrian PKK offshoot "Democratic Union" (PYD) to adopting a common line. The PYD controls Syrian territories on the Turkish border – and has repeatedly come under suspicion of cooperating with Assad. Barzani is anxious to expand his influence, because should Assad be overthrown and Syria break apart, it would be a good opportunity to revive the dream of a Kurdish state.

A group of men has gathered outside Rangin's tent to discuss the situation. They have a clear opinion of Massoud Barzani. When Amin briefly sings his praises, the others applaud him.

The men tell of arbitrary arrests and torture in Damascus. Anyone who is suspicious lands in jail, says one – Sunni or Kurd. He recounts his experiences sitting in a cell with 40 men, where the guards asked no questions but meted out blows instead, and tells of returning home after two weeks and having nothing left to eat. "Prices for food and petrol have quadrupled in Damascus."

The men rant about the regime in Tehran that supports the dictator in Damascus. They tell of Iranian snipers who not only have opponents of the regime in their sights, but are also putting pressure on the Syrian troops: dissenters risk getting shot.

Rangin supports the Free Syrian Army, which is trying to topple the dictator. But he is also a realist: "The army doesn't have the right weapons to fight against Assad." No one objects when he calls for foreign military intervention: "If the opposition doesn't get any air support, the regime will not collapse. The USA and Europe must come to our aid."

Rangin has now realised that Domiz is above all one thing: the end of the line, where he and his family are now stuck. Maybe for weeks. Maybe for months. Maybe for years. All that he has left is the hope that the dictator will fall. "The situation in Syria will only get better when Assad and his system fall apart," Rangin says. "If not, then it's better to die here than in Syria by the hand of Assad."

The clashes in Baghdad between supporters of Muqtada al-Sadr and pro-Iranian militias show that an intra-Shia power struggle is in full swing. An analysis from Cairo by Karim El- ... END_OF_DOCUMENT_TOKEN_TO_BE_REPLACED

Bachtyar Ali sends the hero of his latest novel – "Mein Onkel den der Wind mitnahm" – literally flying. Jamshid is so thin after his years as a political prisoner that a gust of ... END_OF_DOCUMENT_TOKEN_TO_BE_REPLACED

In this essay, renowned Lebanese journalist and writer Hazem Saghieh asks whether the Arab Levant, which stretches from Iraq in the east to Egypt in the west, will remain an ... END_OF_DOCUMENT_TOKEN_TO_BE_REPLACED

Climate change is taking its toll on communities in Iraq. Younes Ajil turns on the tap in his home but nothing comes out. Villages in the south of the drought-hit country are ... END_OF_DOCUMENT_TOKEN_TO_BE_REPLACED

END_OF_DOCUMENT_TOKEN_TO_BE_REPLACED
Social media
and networks
Subscribe to our
newsletter