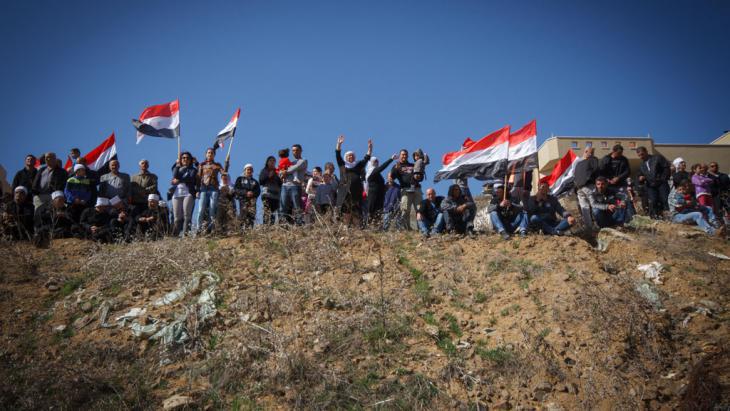 The Druze in the Syrian conflict
Potential to tip the scales

For many years, Syria's Druze community was regarded as a loyal ally of Assad. Yet their pleas to Damascus to protect them against extremist groups fell on deaf ears. Now, on account of their increasing distance to the Baath regime, the Druze are at risk of getting caught in the crossfire. Details by Firas Maksad

Despite the three years of civil war raging in Syria, President Bashar al-Assad has until now succeeded in maintaining the loyalty of most of the country's religious minorities. In particular, the dictator has continued to enjoy the support of Syria's Christians, Alawites and Shia Muslims. It appears that these minorities, which make up almost a quarter of the Syrian population, prefer to live under the Assad regime rather than face an uncertain political future. They fear that extremist forces could emerge victorious from this civil war. Only the Druze community is gradually distancing itself from the Baath regime in Damascus.

The majority of the Druze live in the southern province of As-Suwayda near the Syrian–Jordanian border. Their growing opposition to the Assad regime and their bitter animosity towards the radical groups in the conflict has placed this influential segment of Syria's population in a rather unique position in society. The Syrian Druze are now in a position to support the international alliance against Islamic State (IS) and al-Qaida and, therefore, to change the balance of power in the Syrian conflict.

Since the outbreak of the Syrian revolution, there has been an inherent difficulty in clearly discerning the political loyalties of the Druze community, particularly as they tend not to openly announce their political convictions. The Druze find themselves in the same position as most Syrians living in areas controlled by the Assad regime: they are afraid to openly show their opposition to Assad's rule. Nevertheless, some leaders of the Druze community recently addressed representatives of the Arab media and publically expressed their opposition to the Assad regime. This is a remarkable turn of events, as, up until now, Druze spiritual leaders have officially only declared their praise of the Syrian president.

More than anything else, the Druze are angered by what they see as Assad's refusal to provide them with the necessary weapons to protect their cities from brutal attacks by the Al-Nusra Front, a militia loyal to al-Qaida. Since the start of the popular uprising against the regime in 2011, the Syrian government has only made weapons available to those forces in the country that have remained loyal to Assad, including Druze militias who sided with the regime.

However, as the intensity of the fighting grew, many members of the Druze community who called to be armed themselves have complained that the militias loyal to the regime have not protected the Druze to the extent that was originally promised. During the funeral service for fallen Druze fighters on 17 August 2014, a Druze spiritual leader gave a rousing speech in which he demanded that Damascus deliver heavy weapons. In addition, he publically threatened to find such weapons elsewhere, should Assad fail to meet these demands. This unusually militant appeal clearly brought out into the open the nascent disaffection between Druze spiritual leaders and the Syrian regime. 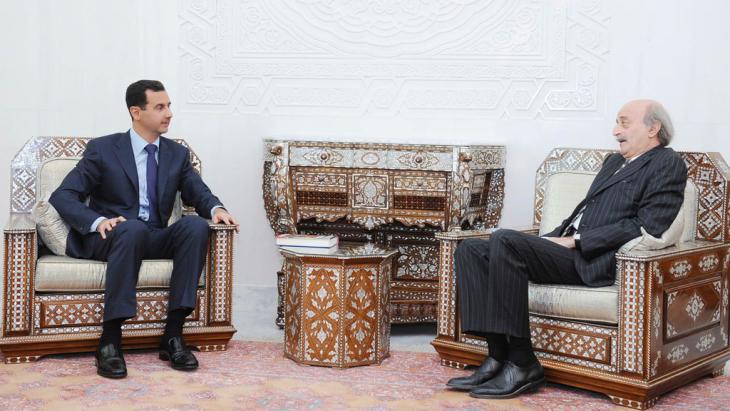 The Lebanese Druze leader Walid Jumblatt (right) has frequently called for the resignation of Assad (left), while at the same time aligning himself with the Lebanese Hezbollah, one of the most important allies of the regime in Damascus

Another indication of this apparent break with Damascus was the demand by the Druze that Wafiq Nasser, the head of security in the province, be removed from his post. The Druze regard him as responsible for the arrest of a well-known spiritual leader who had refused to take part in the obligatory celebrations marking the re-election of President Assad. Following his imprisonment, videos emerged on the Internet featuring armed men raising the Druze flag, firing shots into the air, and vociferously demanding the dismissal of Nasser. This angry protest brought back memories of the early days of the Syrian revolution.

In a show of solidarity, some members of the nominally loyal Druze militias declared their support for the confined religious leader. Despite this, the Assad regime continued to refuse to remove Nasser from his post, which only served to further strain the relationship with the Druze.

In August 2014, thousands of Druze from the city of As-Suwayda attended the burial of fallen Druze soldiers. The growth in disaffection between the Baath regime and the Druze community was plain for all to see. Significant was the fact that very few Syrian flags were displayed, whereas the symbols of the Druze community were abundantly evident.

These events greatly upset the Assad regime. So much so that on 2 September 2014, Damascus assigned two loyal Druze personalities to deliver a message to the Druze leadership. "You demand protection and dependability from the state; the state demands loyalty from you!"

Assad needs the Druze. Their territory forms a strategic wall separating Damascus from those provinces in the south of the country controlled by opposition groups. Nonetheless, the international alliance fighting IS has, to date, not been prepared to alter the stalemate in the Syrian civil war by providing the Druze with any support. As a result, Assad has not felt compelled to change his course with respect to the Druze community. The Syrian Druze community will almost certainly continue to suffer under this state of siege – caught between a tyrannical and violent regime on which it still relies for protection and opposition extremist groups, which they fear will eliminate them.

Firas Maksad is the director of Global Policy Advisors (GPA), a political consultancy firm based in Washington, DC., and professor at the University of Maryland School of Government & Politics.

Home
Print
Newsletter
More on this topic
Four years of war in Syria: Where the uprising began and still lives onSyrian Christians and the Assad regime: "Assad is only protecting himself"Minorities in Syria: United against AssadSyria's minorities and the uprising against the regime: In Assad's fortress
Related Topics
'Islamic State' | IS, Al-Qaida, Assad regime, Druze, Minorities in the Muslim world, Muslim minorities, Syrian Civil War, Syrian opposition
All Topics

For a century, the Kurds and other minorities in Turkey have been subject to state repression. With his dissertation "The Kurdish Question in Turkey", political analyst Ismail ... END_OF_DOCUMENT_TOKEN_TO_BE_REPLACED

Syria, Egypt, Saudi Arabia and the UAE are among those countries increasingly misusing cybercrime legislation to silence dissent and curb freedom of speech. Could a new global ... END_OF_DOCUMENT_TOKEN_TO_BE_REPLACED

A new exhibition, "Syria – Against Forgetting", at Cologne’s Rautenstrauch-Joest-Museum focuses on Syria's artistic and cultural heritage and pays tribute to the country before ... END_OF_DOCUMENT_TOKEN_TO_BE_REPLACED

This year’s Morgenland Festival opened with the premiere of Kinan Azmeh’s musical theatre piece, “Songs for Days to Come”, based on fifteen poems by contemporary Syrian poets. ... END_OF_DOCUMENT_TOKEN_TO_BE_REPLACED

Longlisted for the 2020 International Prize for Arabic Fiction and now available in German translation, Khaled Khalifa’s novel “No One Prayed Over Their Graves” details lives and ... END_OF_DOCUMENT_TOKEN_TO_BE_REPLACED

Rumi's poems, though generally stripped of their Islamic symbolism, are hugely popular around the world. Yet Islamic mysticism is still very much at the heart of these verses. ... END_OF_DOCUMENT_TOKEN_TO_BE_REPLACED
Author:
Firas Maksad
Date:
Mail:
Send via mail

END_OF_DOCUMENT_TOKEN_TO_BE_REPLACED
Social media
and networks
Subscribe to our
newsletter