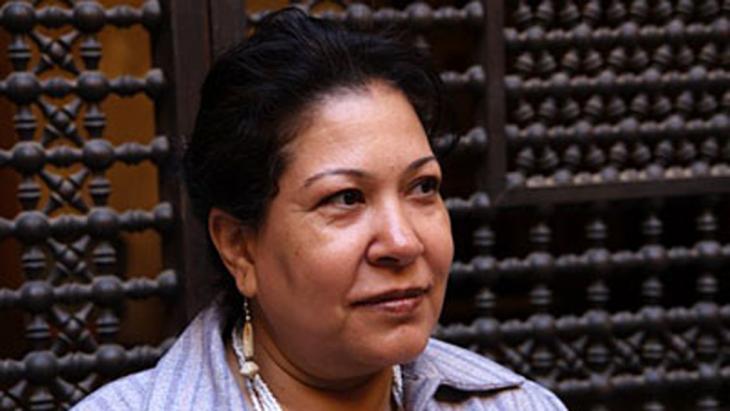 Her love for the characters in her novels is boundless. The characters themselves provide the direction that the creative process takes. This is why Safaa Abdelmenem wrote her novel "Euphoric" completely in Egyptian, the language of her protagonists. By Mohamed El-Baaly

The story takes place on the outskirts of the city, where the poor people live. This location is often chosen as the setting for Egyptian novels. Yet, in contrast to most great novelists, Safaa Abdelmenem does not write in standard Arabic, but rather in Egyptian. Until now, there have been only around a dozen works, at best, written in dialect.

Since she began to write, Safaa Abdelmenem says she has been influenced by Mustafa Musharafa, whose novel Qantara lladī kafara (Qantara Who Disbelieved) is recognized as the first novel written in Egyptian dialect.

People speak in dialect everywhere – except in literature

Whenever Egyptians communicate with each other in everyday life, they generally talk in colloquial Egyptian. Dialect is also normally spoken in film, theatre, and in television series. Until now, however, everyday colloquial language has not been able to assert itself in literary works of fiction. 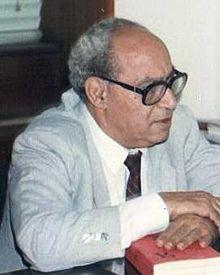 Making use of Egyptian dialect: The scholar Louis Awad (1914-1991) wrote his "Memoires of a Scholarship Student" in Aamiyya


In addition to the abovementioned novel by Mustafa Musharafa, the only other name that comes up is that of Louis Awad, whose book mudakkirātu ṭālibi ba ͨ ta (Memoires of a Scholarship Student) cannot be regarded as a novel. Both works first appeared in the 1960s, although they were written in the 1940s. All other recent works of prose written in Egyptian dialect, at best, fall into the "also ran" category.

By way of contrast, however, a great deal of poetry and many song lyrics have been composed in Egyptian dialect. They are not only well known, but are considered to have achieved a high level of artistic quality. These include, for example, works by the poets Abdel Rahman el-Abnudi and Salah Jahin.

Safaa Abdelmenem explains that she was particularly inspired by the language of Salah Jahin. Also at the top of Abdelmenem's list of interesting poets writing in dialect are Fouad Haddad as well as her late husband, Magdy El-Gabry, who revived Egyptian dialect poetry in the 1990s.

According to Safaa Abdelmenem, she did not initially plan to write her first novel in Egyptian. She had previously published a collection of stories written in Fusha, standard Arabic. Yet, she found that Aamiyya, everyday colloquial Egyptian dialect, better suited the milieu in which the novel takes place as well as its characters.

She maintains that around 90 per cent of the individuals and events in the novel are based on reality. Since these people naturally speak dialect in their everyday lives, she felt she had no other choice but to write in Egyptian. This was the best way to allow her characters to express what they actually think.

The great legacy of popular poetry

When Safaa Abdelmenem decided to write her novel in Egyptian, she was able to draw upon the rich legacy of Egyptian popular poetry in helping her with narrative techniques and also the particularities of the rhythm and sentence structure found in Egyptian dialect. In terms of content, as well, she made use of popular poetry with its many sayings, aphorisms, and folk songs. 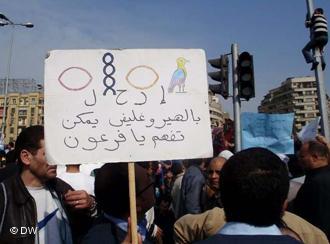 Humour and dialect in opposition to the Mubarak regime: "Get lost! In hieroglyphics, Pharaoh, so that you can understand!" Placard on Tahrir Square in Cairo

Many stories found in this vast cultural heritage have never been set to paper. These include the legends of Naddaha the water nymph and of spirits and demons (jinnis and arafits).


Other tales, such as "The life of Abu Zayd al-Hilali" and stories by Shafiqa and Metwalli have long been preserved in written form. From time immemorial, these stories have been passed on orally, and, of course, their acoustic components carry special significance.

The bedtime stories told by her grandmother, claims Safaa Abdelmenem, must have left their mark on her poetic imagination. In addition, modern, cinematic elements, such as the camera eye technique and the flashback belong to Safaa Abdelmenem's repertoire.

As Safaa Abdelmenem explains, she chose a sort of "hybrid variation" for her novel 'allatī ra'at (Those Who Have Witnessed), published in 2008. Part of the novel is written in standard Arabic and the rest in dialect.

In this case, as well, she had the feeling that Egyptian dialect would be better suited to some of her characters, as it is the language they would naturally speak. Abdelmenem's concern here is not whether dialect is superior to standard Arabic, or the other way around. An author has to make a decision with every novel and every short story as to whether to use standard Arabic or dialect. Authenticity is the decisive factor.

Safaa Abdelmenem has already published eight books, the majority of which are in standard Arabic. At present, the author is working on a new manuscript in colloquial Egyptian with the title dāya wa māšiṭa (Midwives and Hair Dressers).

Safaa Abdelmenem is convinced that the new generation of Egyptian writers will tend to write more in the colloquial language. Bloggers and Facebook users already have the opportunity to express themselves directly in the language in which they think – without making a detour through standard Arabic.

To bolster her view, she points to two recent works, Maher Dawoud's ḥawādītu ͨ ayyili mawkūs (Stories of an Unlucky Person) and Soha Zaki's wağa ͨ u l-'aġānī (The Pain of the Song). She regards both as excellent examples of a new way of writing, which makes use of everyday spoken language and the vocabulary of the new media. In both cases, there is no connection to popular poetry.

Safaa Abdelmenem sees the slogans of the revolution and the banners and posters of Tahrir Square as quite special examples of the use of Egyptian dialect. Everyday colloquial language offers young people the opportunity to explore their hidden creative energies.

In addition, Safaa Abdelmenem believes that the problem of illiteracy in Egypt could be held in check if only more emphasis were placed on dialect within the educational system and as an official written language, as Egyptian is in fact the language that the country's population speaks.

The author is the director of the Sefsafa publishing house in Cairo.

Abortions are illegal in Egypt unless they are necessary to save a married woman's life. But that doesn't stop local women from having one. Egyptian society needs to acknowledge ... END_OF_DOCUMENT_TOKEN_TO_BE_REPLACED

Food prices doubled, salaries halved, banks restricting withdrawals: Egyptians now have the same problems as the Lebanese. But if things get worse here, the fallout will be far ... END_OF_DOCUMENT_TOKEN_TO_BE_REPLACED

Giessen, Eichsfeld, Kusel, Berlin – cars bearing old German number plates are the latest trend on the streets of Cairo. Many Egyptians regard the discarded plates as chic. What ... END_OF_DOCUMENT_TOKEN_TO_BE_REPLACED

Egyptian Sufis have been on the defensive against the country's Islamists for decades. Meanwhile, interest in mysticism is growing among the young members of Cairo’s middle and ... END_OF_DOCUMENT_TOKEN_TO_BE_REPLACED

Chinese President Xi Jinping's visit to Saudi Arabia in December 2022 may have rattled Washington, but it simply highlighted the Arabs’ desire to diversify their foreign relations ... END_OF_DOCUMENT_TOKEN_TO_BE_REPLACED

END_OF_DOCUMENT_TOKEN_TO_BE_REPLACED
Social media
and networks
Subscribe to our
newsletter