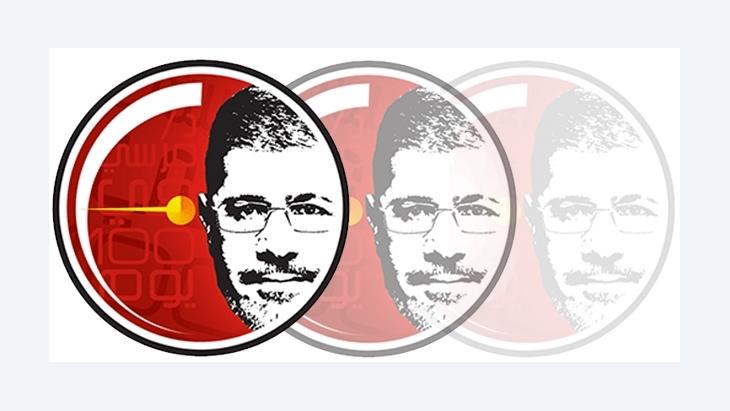 ﻿One hundred days after taking office, Egypt's new President is still a mystery. Sometimes he presents himself as a civilian president, then on other occasions as an uncompromising Islamist. Soon he will have to put his cards on the table. Markus Symank reports from Cairo

Dream results for Mohammed Morsi: Just in time for his 100th day as President, an independent institute in Cairo confirmed that he enjoys outstanding approval ratings. A total of 79 per cent of those polled by the Egyptian Centre for Public Opinion Research indicated that they were satisfied with Morsi's performance. The President was particularly popular with men and older citizens. The responses of women and young people were slightly less positive.

In the Arab world such polls should always be viewed with a large dose of scepticism. But the results do coincide here with assessments by many experts, and the mood on the street suggests a similar conclusion. When the opposition recently tried to drum up support for an anti-Morsi demonstration, Cairo's Tahrir Square remained almost deserted.

Egypt back on the world stage

Not for the first time, Egypt's first freely elected head of state is disabusing critics of their preconceived notions. Hardly anyone thought this farmer's son, the second man in the Islamist Muslim Brotherhood Party running in the presidential elections in June of this year, stood a chance of winning the race. 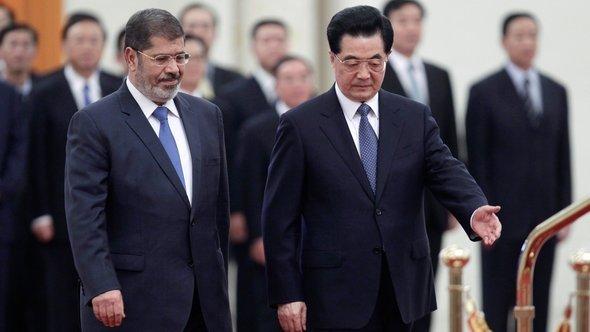 Foreign policy reorientation: Morsi was promised more than 10 billion US dollars in aid and direct investments from China alone, a country that had studiously ignored his predecessor, Hosni Mubarak

​​But then the Islamist who was widely mocked as a "spare" surprised everyone by prevailing against more experienced opponents ranging from liberal leftists to right-wing religionists.

As president, Morsi is now scoring points in foreign policy of all things, a discipline in which his opponents had claimed he had absolutely no expertise. The 61-year-old has now travelled the globe, successfully gaining the trust of a variety of nations.

He has been promised more than 10 billion US dollars in aid and direct investments from China alone, a country that had studiously ignored his predecessor, Hosni Mubarak. Morsi competently represented his country at the UN General Assembly a week ago. He set surprising new accents in the Syria conflict. "Morsi puts Egypt back on the world stage," read a recent headline in the newspaper Al Ahram Online.

That Morsi is able to conduct an autonomous foreign policy at all is something that many already view as a success. Mubarak, by contrast, was regarded as a puppet of Washington. The Egyptians felt ashamed of the decades-long sell-out of their own interests in favour of those of the USA. The revolution last year not only fought for democracy and free elections, but was also about self-determination, pride and honour.

Morsi has given back the largest Arab nation its lost dignity, even if the country's economy continues to depend on infusions of foreign money. "We are back," people on the Nile are saying. 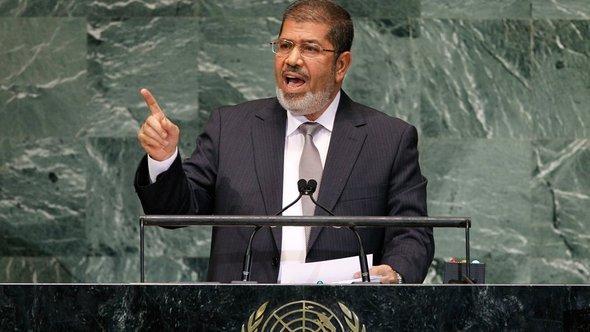 Mohammed Morsi, a man of many faces: Will the president go down in history as an enforcer of the aims of the inscrutable Muslim Brothers? Or as a head of state representing all Egyptians?

​​There is, however, one black mark on Morsi's foreign-policy scorecard. After the storming of the American Embassy in Cairo, triggered by the controversial film "Innocence of Muslims", he shrouded himself in silence for almost 24 hours.

He could only bring himself to apologise under pressure from US President Barack Obama. "Morsi is evidently trying to strike a balance between domestic pressure and international expectations," says Gamal Soltan, professor of political science at the American University in Cairo.

His hesitant response to the attack on the American Embassy did "significant damage" to Egyptian-American relations. A possible cancellation of US aid, currently under debate in Congress, could be the consequence.

Four out of sixty-four promises kept

Soltan believes that Morsi's current popularity is based only to a limited extent on political skills. Weary of chaos, many Egyptians are simply glad to have returned to a state of near normalcy with the election of a new President, Soltan says. It will only be possible to measure actual support for Morsi's policies after a few more months have passed. That's when the travel-happy President will increasingly have to turn his attention to the problems in his own country.

Thus far, he has hardly made much progress at home. The "Morsimeter", a website run by young people for assessing presidential performance, gives the head of state poor marks. He has only met four of the sixty-four objectives he set for his first three months in office. Crime is still on the rise. The traffic problems have not been solved and mountains of rubbish are piling up everywhere. Morsi has not even touched yet on major issues such as youth unemployment or tax reform.

"Morsi is not building any bridges"

Furthermore, the president has thus far failed to implement urgently needed economic reforms. Like the Mubarak regime, Morsi's government is also living on credit. According to the British magazine The Economist, Egypt now has the third highest level of sovereign debt in the world. Economists consider a devaluation of the Egyptian currency just as inevitable as the cancellation of gas and bread subsidies for the poor. Otherwise, national bankruptcy looms.

These are exactly the kinds of unpopular decisions the liberal and leftist parties are waiting to pounce on in order to push themselves to the forefront in the upcoming elections. After their landslide victory in the country's first free elections, the Islamists have neglected to bring the opposition on board. This could now come home to roost.

"Morsi's biggest mistake is that he does not build any bridges. Neither to political opponents, nor to the 48 per cent of Egyptians who did not vote for him," criticises Gamal Soltan.

Administrator rather than visionary

To stem the polarisation of Egyptian society, Morsi would have to emancipate himself from the leadership of the Muslim Brotherhood. But it is unclear whether he is willing or able to do so. His previous actions as head of state do not betray any clear orientation.

On the one hand there is the civilian president who appoints a Christian adviser, allows alcohol sales and fights terrorists in the Sinai. And then there is the uncompromising Islamist who excludes women from government, blusters about a religious education system and rails against Western values.

The absence of a clear goal, of a national project: this was the most serious accusation aimed at ex-dictator Hosni Mubarak by his people. Morsi, too, has mainly presented himself thus far as an administrator, and only rarely as a visionary. The country's economic and social problems cannot be put on the back burner for much longer, though.

The two sides of Mohammed Morsi cannot persist forever either. Will the president go down in history as an enforcer of the aims of the inscrutable Muslim Brothers? Or as a head of state representing all Egyptians? Morsi has until 2016 to provide his people with an answer. Because that's when new elections will be held, the constitutional assembly decided last week.

"The people aren’t ready for democracy" has been the constitutional basis for Arab tyranny, its favourite slogan and its sacred narrative for more than a century. Yet, asks Khaled ... END_OF_DOCUMENT_TOKEN_TO_BE_REPLACED

A new global database shows a significant gap in reported COVID-related deaths, suggesting the actual worldwide death toll is short by at least 1 million. That's due in part to ... END_OF_DOCUMENT_TOKEN_TO_BE_REPLACED

Two decades after the attacks of 11 September 2001, the West faces the shattered debris of its failure – not only in Afghanistan, but also in Iraq, Syria, Libya and Yemen. What ... END_OF_DOCUMENT_TOKEN_TO_BE_REPLACED

The coronavirus pandemic has turned lives upside down all over the world. In the Middle Ages, however, people lived with epidemics all the time. The best and most famous ... END_OF_DOCUMENT_TOKEN_TO_BE_REPLACED

In Ancient Egypt, the pharaohs had "solar boats" built to take them into the afterlife. One of these boats was discovered in 1954. It has now been moved to the Grand Egyptian ... END_OF_DOCUMENT_TOKEN_TO_BE_REPLACED

Attracting little attention from the world at large, Egypt's military regime has been mercilessly going after dissidents. Now, the first executions of prominent members of the ... END_OF_DOCUMENT_TOKEN_TO_BE_REPLACED
Author:
Markus Symank
Date:
Mail:
Send via mail

END_OF_DOCUMENT_TOKEN_TO_BE_REPLACED
Social media
and networks
Subscribe to our
newsletter