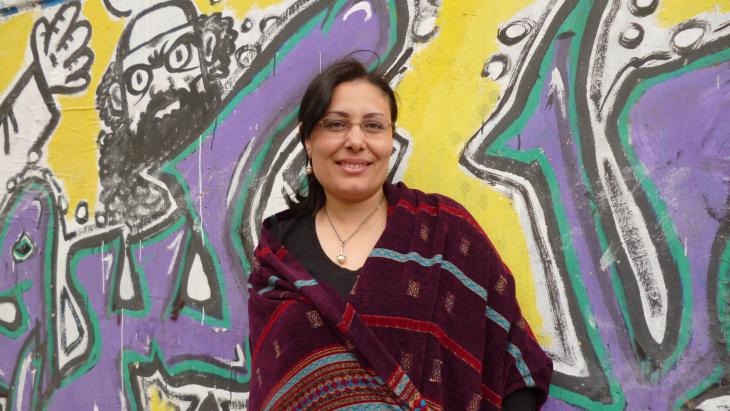 The Egyptian Revolution five years on

Ghosts of the uprising

25 January 2011 saw the start of the revolution in Egypt that led to the collapse of the Mubarak dictatorship. Today, the Egyptian writer Mansoura Ez-Eldin sees another regime in power staging an absurd drama of fear and oppression

A sense of defeat and frustration has spread among the people who, five years ago, carried the spirit of the revolution into Egypt’s streets and squares. Some now content themselves with the hope of reform, because under current conditions, public protests are no longer permitted; a few even share the regime’s view that the priority now is the fight against terrorism, with the government being the only force that can still hold the state together.

The cycle of reprisals

Paradoxically, it seems that these days, it is the regime itself invoking the spirit of the revolution – though admittedly ex negativo: as a nightmare that might recur at any time, to be averted at all costs. This behaviour is reminiscent of someone with a mental illness who represses his suffering and for that very reason is caught up and paralysed by it. We can see the state battling the ghost of the revolution in the same way – with increasing panic as the fifth anniversary draws closer. This is reflected in an unprecedented restriction of civil liberties. Almost every day there is news of fresh reprisals; you can sense freedom of expression being stifled, just as you would sense an acute lack of oxygen.

At the end of December, for example, the security service and state officials stormed first the Rawabet Theatre and its attached art gallery, then the offices of the independent Merit publishing house within the space of 24 hours. Employees were interrogated, computers searched and confiscated, IDs and licences checked. At the theatre and gallery, the raid was supposedly to do with administrative irregularities and the lack of a fire exit; both cultural institutions were shut down until further notice. Merit, meanwhile, was accused of operating without a licence. Mohammed Hashem, the owner of the publishing house, pointed out that Merit had been doing business in Cairo for years and gave ironic expression to his bafflement at having had a substantial police squad set on him. 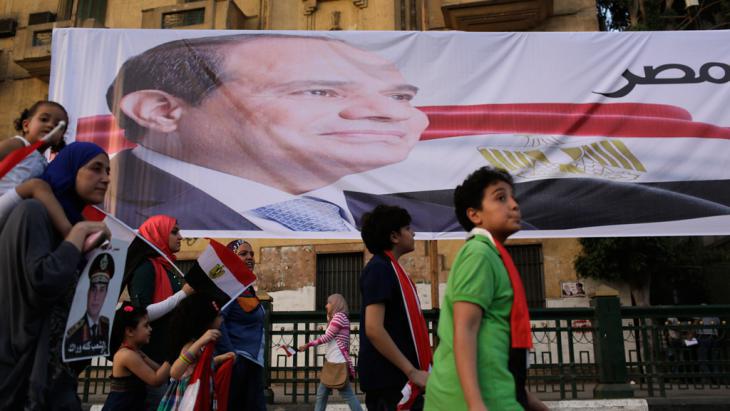 Revolt gives way to resignation: a sense of defeat and frustration has spread among the people who, five years ago, carried the spirit of the revolution into Egypt’s streets and squares. Some now content themselves with the hope of reform, because under current conditions, public protests are no longer permitted; a few even share the regime’s view that the priority now is the fight against terrorism, with the government being the only force that can still hold the state together

Of course, there is an obvious link to be made between the action against the publisher and the fact that Merit played a central role during the revolt: the offices were a meeting point for activists and intellectuals; during the final years of the Mubarak dictatorship, Hashem had become a driving force within the "Writers and Artists for Change" group. Last but not least, since it opened in 1998, Merit has been a forum for avant-garde, uncomfortable books, as well as for an understanding of literature beyond censorship and restrictions.

On 13 January, it was the turn of the poet Omar Hazek. He was held at Cairo airport for five hours and prevented from departing for the Netherlands, where he was to be awarded the Oxfam Novib/PEN International Free Expression Award. Hazek had already been arrested in December 2013 and sentenced to two years in prison for his participation in an unauthorised demonstration. He had taken part in a peaceful protest concerning the fate of a man who had been beaten to death by the security forces. On 14 January, the doctor and political activist Tahir Mokhtar was arrested. Ironically enough, one of the charges against him was "participation in the 2011 January Revolution" – in a country whose constitution specifically recognises this revolution. The same day, the offices of the Internet portal "Masr al-Arabiya" were searched and eight computers confiscated.

Officially, the current Egyptian government has issued an invitation for a "renewal of religious discourse" and is combatting Islamist extremism.

But in fact, the dominant mentality is one of arch conservatism, which doesn't permit any deviation from the current norm. So there are still cases of intellectuals or academics being sentenced for old-fashioned offences such as "contempt of religion" or "violation of the public sense of shame".

In October 2015, the religious scholar Islam al-Buhairi was sentenced to five years imprisonment for "blasphemy", after he used his television programme to criticise those traditions of thought that suggest radical interpretations of the Koran and the Sunna. The law cited in his case goes back to the year 1884.

No less nonsensical than levelling accusations of blasphemy against critical thinkers is concern for the "public sense of shame". The film producer Rana el-Sobky was recently taken to court after her film Regatta had been judged "ethically and socially inappropriate". She was given a one-year jail term and a fine of 10,000 Egyptian pounds.

The judgement in her case says, among other things, that "Even if the right to creativity is written into the constitution, it is still subject to the limitations given in Article 2 of the constitution. This states that Islam is the national religion and  the principles of Islamic sharia form the most important source of legislation. From this, it follows that creativity must remain within the limits imposed by sharia and may not cause religious discord or endanger young people’s sense of decency." 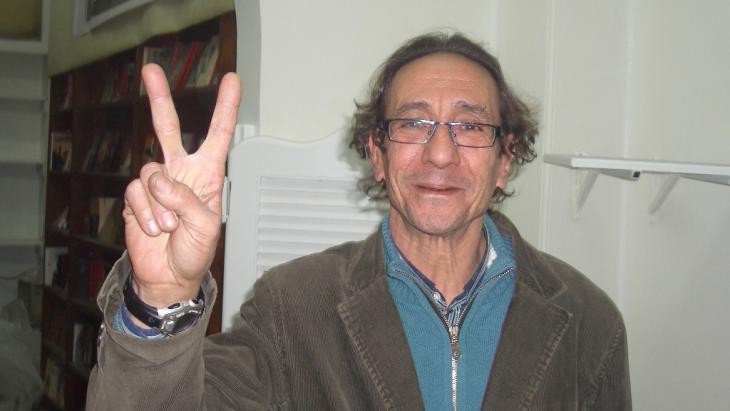 "Writers and Artists for Change" as a potential danger to the current authoritarian regime: Merit, meanwhile, was accused of operating without a licence. Mohammed Hashem, the owner of the publishing house, pointed out that Merit had been doing business in Cairo for years and gave ironic expression to his bafflement at having had a substantial police squad set on him

The writer Ahmed Naji also caused moral outrage from a fellow citizen when passages from his latest novel were printed in the renowned literary magazine "Akhbar al-adab". He, too, ended up in court. Naji and the editor-in-chief of the magazine were released at the start of January; the interesting point here is that the defence successfully invoked the right to creative freedom which is guaranteed in the constitution. They also subtly pointed out that the very words the plaintiff and the state prosecutor were trying to present as immoral appeared in texts of Islamic jurisprudence and other classical works of Arab writing, where no shame was attached to them. The state prosecutor, however, lost no time in disputing the acquittal; the judicial farce is set to continue on 6 February.

Attempts to discern any kind of logic or system behind these processes are doomed to failure; instead, they give the impression that irrationality has become a goal and an ambition for our government. As if it sees randomness and the abolition of logic as an appropriate means of asserting its power, intimidating its opponents and breeding fear and disquiet among its followers as well as the opposition.

The struggle to suppress

Even if the 2011 Revolution didn’t achieve its goals, it still yielded one crucial success: it opened up the public space and freed it from the iron grip of the state power. In the year of the revolution and the period that followed, groups and organisations came forward that had previously been banned from public. Egyptian society became aware of its diversity; people encountered and - in the best case - acknowledged differences. From the beginning, the revolution also had a kind of carnival aspect, a spectacle open to all.

In spite of the violence, in spite of the fact that many people stood up for freedom and paid for it with their lives, the mood of the demonstrations was reminiscent of a street party. There were always people spontaneously striking up a song together, performing short sketches or reciting a poem.

Although the scope for the progressive forces became ever more limited in the period that followed, the art forms of the revolt – the graffiti, the street theatre, the new songs – have stayed with us as reminders of that time. At first, there was an attempt to secure a permanent place in the public realm for this art with the monthly "Al-Fann al-Maidan" (Art of Maidan) festival; but after a while, conflicts with the security forces and financial issues forced the organisers to shelve their activities. Independent cultural organisations also came under pressure from the authorities, who little by little took back control of the public space. 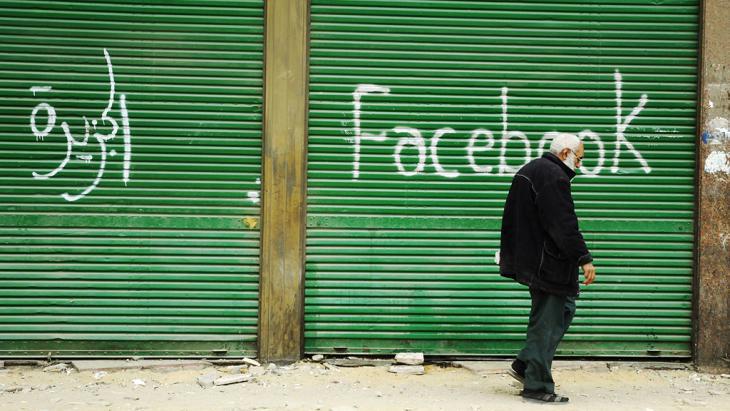 On the retreat: "The Internet and in particular social media famously played a decisive role in mobilising resistance in January 2011. Yet now, on its fifth anniversary, the revolution is forced to take refuge on the Internet again", writes Mansoura Ez-Eldin

The Internet and in particular social media famously played a decisive role in mobilising resistance in January 2011. In the run-up to the revolt, a few jokers on Facebook were still scornfully listing the calls to protest as an "event"; but as the revolution gathered pace, people reacted with disbelief to the sight of the millions who had immediately heeded that call.

The Sisi government has now made unauthorised demonstrations a punishable offence; it is even making the audacious claim that it will complete the revolution, although its policies in fact diametrically oppose this stated aim.

And so on its fifth anniversary, the revolution is forced to take refuge on the Internet again. Under the hashtag "January revolution: I was there" people are coming together to defend the spirit of resistance and hold onto their dreams and ideas – even at a time when participation in the Egyptian Revolution can be declared a criminal offence.

The author and journalist Mansoura Ez-Eldin was born in 1976 in the Nile Delta.

Social media make many things possible – including the unwanted circulation of intimate private photos. This has given rise to new forms of crime and sexual blackmail. An ... END_OF_DOCUMENT_TOKEN_TO_BE_REPLACED

The change in U.S. president is also having an impact on the conflict between Turkey and Greece. Since the USA has started to play the Greek card, the strategic situation in the ... END_OF_DOCUMENT_TOKEN_TO_BE_REPLACED

Arab women played a leading role in the protest movement of 2011. Since then, ongoing social transformation has had a considerable impact on their lives. What is their assessment ... END_OF_DOCUMENT_TOKEN_TO_BE_REPLACED

They’ve already got the Louvre; they’ll soon have a Guggenheim Museum as well – and now the Emirates have added literature to their quest for cultural supremacy in the Arab world ... END_OF_DOCUMENT_TOKEN_TO_BE_REPLACED

Years in the making, Sisi's elite New Administrative Capital will isolate most Egyptians from their centres of government in an effort to fortify the regime against any social ... END_OF_DOCUMENT_TOKEN_TO_BE_REPLACED

Professor Timothy Brennan's "Places of Mind: A Life of Edward Said" is a detailed biography of one of the most important intellectuals of the twentieth century, taking us on a ... END_OF_DOCUMENT_TOKEN_TO_BE_REPLACED
Author:
Mansura Eseddin
Date:
Mail:
Send via mail

END_OF_DOCUMENT_TOKEN_TO_BE_REPLACED
Social media
and networks
Subscribe to our
newsletter