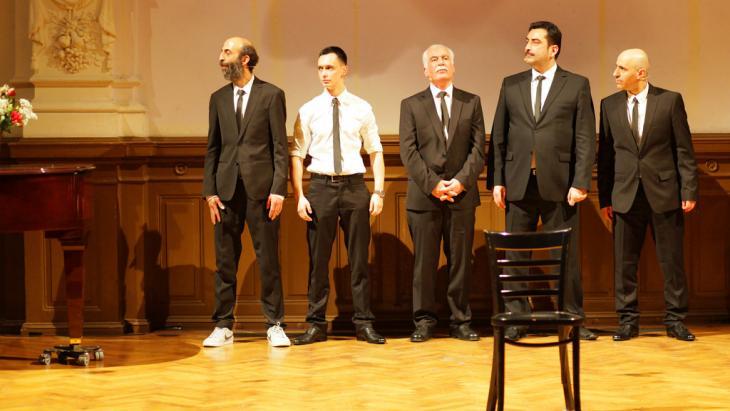 Men in Germany with Turkish roots are starting to break their silence and talk about their problems and how to overcome them in self-help groups and on stage. These "Supermen" have also now made their debut in Turkish literature. By Astrid Kaminski

We forgive men quite a lot, but only on the condition that they show their weakness, their Achilles heel, their vulnerability, and that they let their guard down in front of us – at least just a little. Men who have enjoyed a more or less egalitarian gender education are now able to do this, or it simply comes naturally to them. But those who grew up in conservative patriarchal circumstances sometimes have a harder time letting go.

The young losers in question are intractable, holding onto their macho stance no matter what. But the author knows exactly what their weak points are. From the sand pit onwards, he lets them – the heavy baggage of their upbringing in tow – bang their heads against brick walls time and again, when all the while it is clear to everyone – except themselves – what the problem is.

Turkish men are not the only ones – not the first and probably not the last – to experience problems like these. The only difference is that they are increasingly facing up to these problems and doing it in a way that is fascinating to observe. 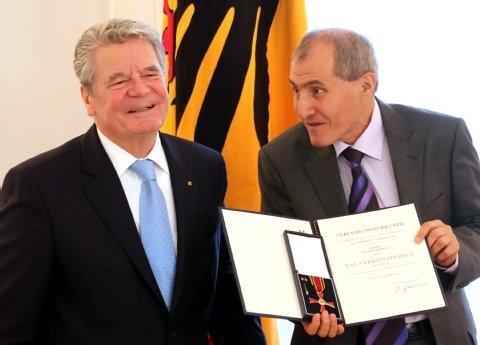 In 2007, the psychologist Kazim Erdogan (right) founded the first Turkish fathers' group in the troubled district of Berlin-Neukölln. Five years later, he was presented with the Federal Cross of Merit for his work by President Joachim Gauck

In the wonderful short stories by Sait Faik and Metin Eloglu, written in the mid-twentieth century, failed machos rove like vagabonds through their beloved Istanbul, as hopeless as they are entertaining. If you're going to run aground, than you might as well do it drunkenly and poetically. It would never occur to these ne'er-do-wells to join a self-help group.

But that's just what Turkish-born men are doing today. They are ready to talk about their concept of honour and the double standards that often go with it, about religious beliefs, violence, the fear of failure and a brother's attempted suicide at the age of eight.

There are men who are on the verge of doing something bad to their wives and who are trying to find a solution; there are men who have been rejected by their wife's family because they no longer want to – or can – live up to the role they are expected to play; there are men who suffered extreme violence at the hands of their fathers (belts, sticks and worse); and there are men whose children have been kidnapped. Many are caught up in a struggle between reason, personal ethics and patterns they have learned throughout their lives.

The psychologist Kazim Erdogan founded the first Turkish fathers' group in the troubled district of Berlin-Neukölln in 2007. Now there are six of them. If more financial support were available, there would be still more; the demand is certainly there.

Initiatives are also being launched in other German cities such as Hamburg, Nuremberg and Munich, or near Izmir in Turkey. Berlin now also has an international group. Kazim Erdogan says that positive media coverage has helped to encourage men to join. Exuding an air of unflagging and unshakable optimism, Erdogan, whom President Joachim Gauck presented with the Federal Cross of Merit in 2012, has to date spoken on the topic at 200 events.

The Munich-based author and journalist Isabella Kroth was the first to take a deep interest in the initiative. Kroth came across men who were willing to tell their stories and reflect on them, providing her with material for the 12 sensitive portraits that later appeared in her book "Halbmondwahrheiten" (Crescent Moon and Half-Truths).

This process of opening up to the outside world is also fundamental to the groups founded by Kazim Erdogan. Participants speak not only amongst themselves, but also at parents' evenings, and they help others move house or volunteer to tend school gardens. They want to repair their image, their own lives and the lives of others. 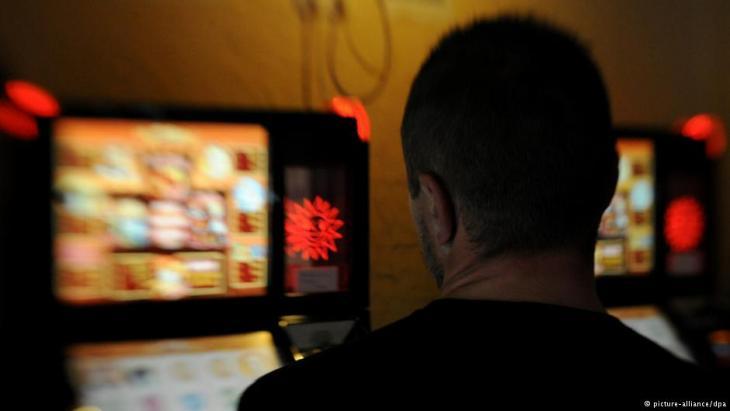 "Turkish men are not the only ones – not the first and probably not the last – to experience problems like these. The only difference is that they are increasingly facing up to these problems and doing it in a way that is fascinating to observe."

In the meantime, the stories of these men with Turkish roots have made it to stage and screen. Film director Bettina Blümner has made a documentary based on the book "Crescent Moon and Half-Truths".

At Berlin's Ballhaus Naunynstrasse – a theatre for post-migrant perspectives founded by the former theatre manager Shermin Langhoff – a play entitled "Supermen" is being staged. The five "supermen" on stage tell the audience about their lives. The stories are very dramatic, providing a wealth of material.

One of them, for example, is currently behind bars. He has a sick wife and twins at home. His story began when he owed money for the rent and didn't know where to get it. So he came up with the idea of solving the problem by committing a robbery. His German wife agreed with the idea, but advised him to wear a mask. He didn't listen to her and set off unmasked with a heat gun in his hand.

After taking one look at his first victim's account balance, he gives her back her bank card; the woman has just enough to pay the rent, he thinks to himself, what is she supposed to live on if he robs her money? On his third attempt, he gets caught and is sentenced to ten years in prison. This stint in jail turns out to be the best time of his life, he says. He has time for himself, time to learn, time to do a university-entrance diploma (with a stunning 1.59 grade point average) ... it's a fresh start.

It seems like these men were born to be characters in a picaresque novel. There is obviously a good reason why this genre appears so often in Turkish-language literature – most recently from the pen of Emrah Serbes. Readers can't seem to get enough of books like "young losers" with their drive, wit and sociological insights, even if the stories are, at times, painful.

These stories have a flair for pinpointing those small, yet telling, moments when people finally come to their senses, for example when father and son admit to their insignificance in the grand scheme of things, confessing that not even motion detectors take any notice of them.

But the fact that such lives lend themselves so well to literature should not obscure how hard they are in reality for all those involved. Anyone looking for facts on this subject matter would do well to read the acclaimed study "Zum Mann gehätschelt. Zum Mann gedrillt" (Coddled into Being a Man. Drilled into Being a Man) by the female author Pinar Selek.

Both the content of this book and the attacks on the author that followed its publication show how long the road ahead of us still is.

Giessen, Eichsfeld, Kusel, Berlin – cars bearing old German number plates are the latest trend on the streets of Cairo. Many Egyptians regard the discarded plates as chic. What ... END_OF_DOCUMENT_TOKEN_TO_BE_REPLACED

Tunisia has been going through a severe economic and political crisis in recent years. More than one in three young people there are unemployed. For many skilled, qualified and ... END_OF_DOCUMENT_TOKEN_TO_BE_REPLACED

German imams have publicly expressed their solidarity with the women of Afghanistan. In a letter of protest, the clerics say that the Taliban regime's decree barring women from ... END_OF_DOCUMENT_TOKEN_TO_BE_REPLACED

At the end of every year, the team at Qantara.de gives you a run-down of the ten most-read articles on the site over the past 12 months. Here is a quick overview of the stories ... END_OF_DOCUMENT_TOKEN_TO_BE_REPLACED

Social engagement is often motivated by religious factors. A new book explores the background to these community efforts and appraises how effective they are in helping to ... END_OF_DOCUMENT_TOKEN_TO_BE_REPLACED

The government in the Netherlands, one of the last European nations to abolish slavery, has made an historic apology. But some feel that there is still a long way to go. By Ella ... END_OF_DOCUMENT_TOKEN_TO_BE_REPLACED
Author:
Astrid Kaminski
Date:
Mail:
Send via mail

END_OF_DOCUMENT_TOKEN_TO_BE_REPLACED
Social media
and networks
Subscribe to our
newsletter