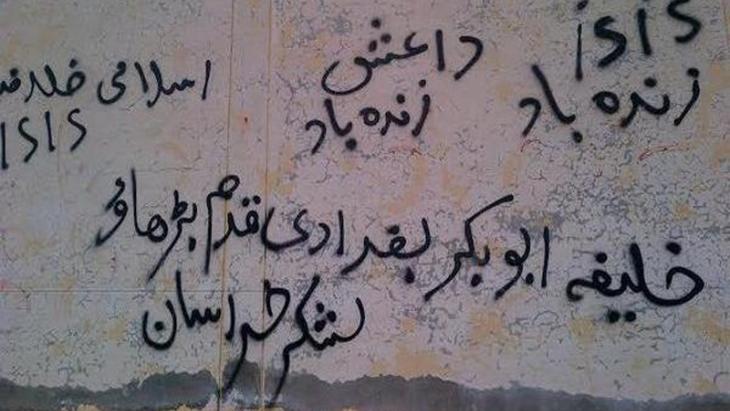 The emergence of Islamic State in Pakistan
"They don't negotiate, they don't make partners"

Islamic State (IS) has shocked the world with its bulldozer-like advance over Sunni-dominated areas of Iraq and Syria. Ever since it declared a caliphate, there have been fears that the group may supersede al-Qaida as the vanguard of global jihadist movements. According to Kiran Nazish in Pakistan, IS has been trying to recruit from the jihadist stream in South Asia

Islamic State's rapid territorial gains in the Middle East quickly heightened tensions in South Asia, specifically in Afghanistan and Pakistan, a region that has been rife with militancy and sectarian violence for many years. After 9/11, the number of militant groups and their off-shoots in these countries multiplied, making them an ideal ground for new recruits for militant organisations in other parts of the world.

The region is home to some of the most high-profile banned terrorist groups in the world, including the Taliban and al-Qaida, which have thrived in the region, if only underground. Many observers watching Islamic State's attempts to spread its tentacles into Pakistan believe that this jihadist group's aura of power and authority could hurt the region much more, by expanding militancy there and furthering the cause of jihad.

In fact, many analysts are more fearful of IS links or aspirations in Pakistan than in Afghanistan. "Pakistan has a rich variety of home-grown and international terrorist organisations. This makes it a more viable place for Islamic State," said a former al-Qaida militant who recently joined IS and has been involved in a recruitment campaign in Pakistan. 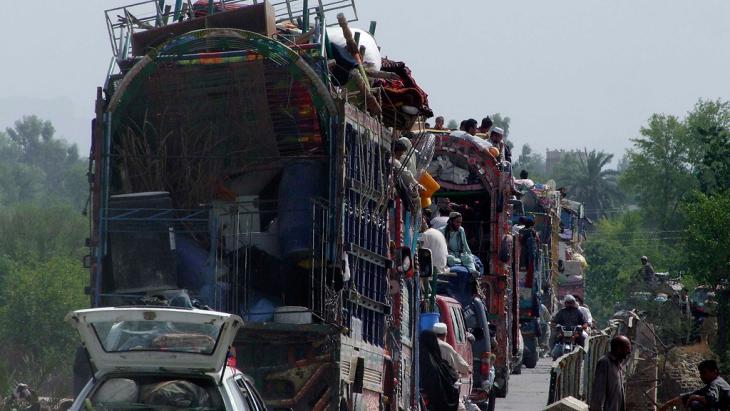 People fleeing the military offensive against Pakistani militants in North Waziristan enter Pakistan's Khyber-Pakhtunkhwa province. In late June 2014, Pakistan announced the start of a full-on military offensive to quash an increasingly assertive Pakistani Taliban insurgency in the ethnic Pashtun region, the base of some of the country's most feared al-Qaida-linked militants

Evidence of IS recruitment in Pakistan

In the past few months, there has been sporadic but solid evidence that IS is indeed trying to increase its influence in Pakistan. Pro-IS wall-chalkings and graffiti have been appearing in different parts of Pakistan, from the northern cities of Peshawar and the north-eastern city of Lahore to the southern metropolis of Karachi and the remote, dangerous parts of Balochistan, bordering Iran and Afghanistan.

In the past two months, there have been several incidents of Islamic State extending its recruitment campaigns to local jihadis in the form of pamphlets distributed in mosques, madrassas (religious schools) and IDP/refugee camps and formal invitations to students of madrassas who are willing to join the fight.

Pakistan's intelligence agencies claim to have identified the recruiters who have been trying to inspire young fighters to join IS, although they decline to reveal their identities. Both the government and Pakistani security agencies, on the other hand, deny the presence of Islamic State in the country and dismiss claims of visible support for the organisation. Such denials and lack of investigation could in fact exacerbate any problems arising from such allegiances.

The attraction of IS

For militants in Pakistan, including the Pakistani Taliban and their off-shoots, Islamic State's victories in the Middle East are inspiring and reviving at a time when many militant groups have been hit by military operations and are exhausted from dealing with drone strikes. IS's power and resources have inspired many smaller groups across the world and groups both large and small in Pakistan. What's more, the idea of a singular Islamic caliphate is empowering and promising for young impressionable militants. 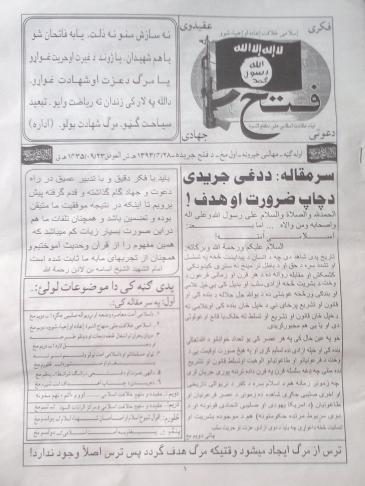 While many militant groups in Pakistan may not necessarily seem as disturbing as IS, some mainstream groups in the country, such as the Pakistani Taliban, have always had similarly violent tendencies. Starting in 2007, when they took control of Swat in northern Pakistan, the Pakistani Taliban carried out horrific acts of public violence towards those who did not follow them and comply by their strict version of Islam. Swat is also the home of Nobel Peace Prize winner Malala Yousafzai and the place where she was shot by the same Pakistani Taliban about whom she wrote in her BBC Urdu column when these militants banned education for girls in the city.

Forced conversions, public torture, flogging and beheadings were routinely carried out to create a climate of fear and make people submit to the militant group. These militants were later dispersed by the former President Pervez Musharraf in a military operation. Many of them spread across different parts of the country, including primarily the FATA [Federal Administration of Tribal Agencies] region bordering Afghanistan.

Many militants and a few groups, including the Pakistani Taliban, have pledged allegiance to IS leader Abu-Bakr al-Baghdadi, but the real concern is whether these supporters in Pakistan will actually take action in the name of Islamic State. Pakistani jihadi groups, especially those with extremely violent tendencies such as the Tehrik-e-Taliban Pakistan, Jamat-ud-Da'awa, Lashkare-e-Jhangvi and Lashkar-e-Taiba, could have a massive impact on the region if they joined Islamic State operations.

It is believed that in the past, the militant threat in Afghanistan and Pakistan has caused less damage due to the possibility of co-existence, which is not an option with Islamic State, you are either with them or against them.

"I hope ISIS does not have much effect in Pakistan. And I hope if it does spread into Pakistan it remains confined to certain pockets," says Abdullah Ahmed, a security studies professor at Karachi University. "If they do spread the way they have spread in Iraq and Syria, it will be a huge mess for the whole of South Asia. Islamic State's approach and strategies are much more destructive than those of the previous groups we have seen in Pakistan and Afghanistan region. They don't negotiate, they don't make partners and they don't believe in working together."

IS has also been trying to woo local Pakistani groups and has sent agents to expand its recruitment in the region. However, while Pakistan could be one of the easiest places for IS to begin recruitment in South Asia, it may also face many obstacles. For example, it is possible that local groups may see IS as a threat to their monopoly in the region or may not want to share power. 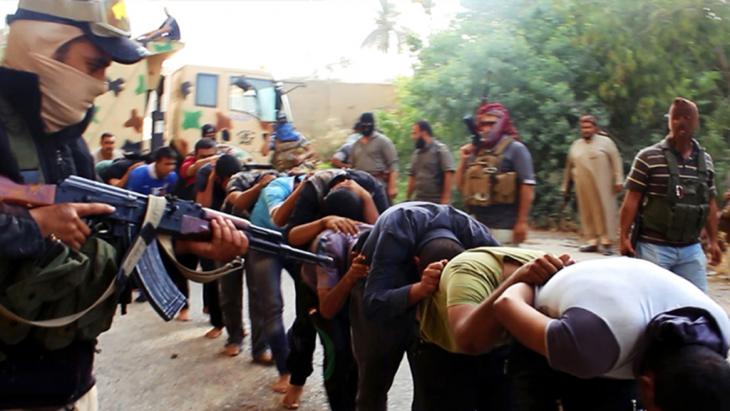 IS militants leading away captured Iraqi soldiers, Tikrit, Iraq, 14 June 2014. For at least a decade, Pakistan has been fertile ground for militant groups: 40 are known to be operating there, which is why it is likely to be the first place Islamic State will seek to find support, should it decide to move into South Asia. In fact, according to Kiran Nazish, there is already evidence that it has started to do so

Many smaller groups in Pakistan who yearn for more international exposure and credibility among militant groups welcome such advances. In particular, anti-Shia militant groups like Sipah-e-Sahaba Pakistan, which is also known as Ahle Sunnat Wal Jamaat Pakistan, have shown enthusiastic support for IS, often promoting its activities in Iraq and Syria. There are many reports from Karachi about these smaller groups giving sermons and organising on-campus rallies to promote Islamic State's message inside big universities.

Abdul Sattar, an Islamic Studies scholar at al-Hanifia Foundation, feels that the biggest threat to Pakistan and the region comes from these smaller groups. "They don't differ much from the Islamic State ideology, and neither are they any less brutal in their approach." According to Sattar, non-Sunni Muslims, whether Shia or Ahmedi, face a growing threat from such groups.

In order to deal with this threat, Pakistan needs to do a number of things: to identify stake-holders, such as militant groups or religious groups, who could help IS reach their goals in Pakistan, to investigate which militant groups are co-operating with Islamic State and in what capacity, and to create obstacles for any new recruits or IS recruitment campaigns within the country.

Home
Print
Newsletter
More on this topic
Islamic State (IS): A totalitarian, expansive and hegemonic projectDrone war in Afghanistan and Pakistan: Living in the shadow of the "angels of death"Portrait of Pakistani politician Imran Khan: Flirting with the TalibanInterview with Asma Jahangir, winner of the Right Livelihood Award: "Every restriction is based on religion"
Related Topics
'Islamic State' | IS, Al-Qaida, International terrorism, Taliban
All Topics

Since returning to power in Afghanistan, the Taliban have steadily eroded the rights and opportunities of women and girls, particularly their access to education. But Afghans are ... END_OF_DOCUMENT_TOKEN_TO_BE_REPLACED

Since seizing power in mid-2021, the Taliban have continued to restrict the rights of Afghan women and girls. At the end of 2022, they banned women from attending higher education ... END_OF_DOCUMENT_TOKEN_TO_BE_REPLACED

German imams have publicly expressed their solidarity with the women of Afghanistan. In a letter of protest, the clerics say that the Taliban regime's decree barring women from ... END_OF_DOCUMENT_TOKEN_TO_BE_REPLACED

At the end of every year, the team at Qantara.de gives you a run-down of the ten most-read articles on the site over the past 12 months. Here is a quick overview of the stories ... END_OF_DOCUMENT_TOKEN_TO_BE_REPLACED

The "Weiter Schreiben" (Keep Writing) project promotes literature from war-torn and crisis-stricken regions and has, most recently, shone its spotlight on Afghanistan. Afghan ... END_OF_DOCUMENT_TOKEN_TO_BE_REPLACED

The Islamic Republic has been unable to quell the civil unrest that erupted three months ago, after Mahsa Amini died after being detained for violating hijab rules. Now the ... END_OF_DOCUMENT_TOKEN_TO_BE_REPLACED

Comments for this article: "They don't negotiate, they don't make partners"

An interesting, informative piece of journalism. However why does the author cause confusion by using the term "Pakistan Taliban" as only part of the Islamic militancy in that country? This is inaccurate as "Pakistan Taliban" is an umbrella term covering all the groups from the Haqqani network to the TTP and others who apply a very strict interpretation to Shariah. Readers should be aware of this.

END_OF_DOCUMENT_TOKEN_TO_BE_REPLACED
Social media
and networks
Subscribe to our
newsletter