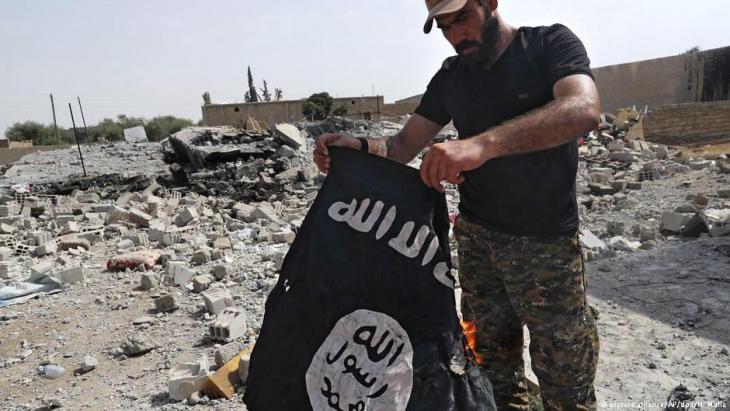 The end of the "Islamic State"

Entering a new chapter in Syria

The appeal and the peculiarity of Islamic State always lay in its claim that it already existed as such, not that it was a work in progress. But the capture of the last IS bastion on the Euphrates must now represent the final nail in the coffin for the jihadistsʹ state-building project. By Ulrich von Schwerin

A state under the rule of Islamic law encompassing the entire world – the jihadists were aiming for nothing less. When their leader Abu Bakr al-Baghdadi declared the ʹcaliphateʹ in June 2014 from the pulpit of the Al-Nuri mosque in Mosul, he simultaneously omitted the last words from the name "Islamic State in Iraq and Syria" to emphasise the universal validity of the project.

They had set their sights on ruling not Syria, not Iraq, but the whole world. Thousands of Islamists from all over the world were so enthused by the idea that they travelled to the battle zone to help set up this "Islamic State".

"After all, as long as this state does not emerge, Muslims as a whole are sinners and in the eyes of God, the noble, the great, responsible for their failure to establish it," wrote Hassan al-Banna, one of the pioneers of the Islamic State concept. In his view, this state was a common area of justice and equity where all Muslims could live in harmony with Islam. In Iraq and Syria, the reality was of course far removed from this idea, because the jihadists quickly established a tyrannical system of governance.

Collapse of IS just a matter of time

The attempt to realise their state-building project in the face of global resistance was just as much doomed to failure as the idea that they could rule using terror and violence. It may well be the case that the jihadists were not that much more brutal than the Syrian regime or some of the other militias, but the demonstrative showcasing of violence only served to repel many followers and caused the international community to close ranks in a rare show of solidarity. So in the end, it was just a matter of time before the jihadists would be vanquished. 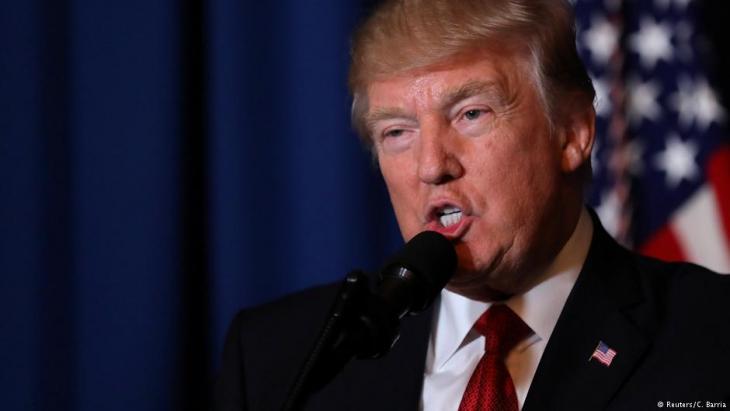 Serious consequences for the conflict region: last December U.S. President Donald Trump announced that he would withdraw all 2,000 US soldiers from Syria – on the grounds that the terrorist militia "Islamic State" (IS) had been defeated there. The Kurds fear an attack by Turkey if the USA withdraws its soldiers. Turkey sees in the YPG the Syrian offshoot of the banned Kurdish Workers Party PKK and has already threatened to attack

So now the terror state is history and a new chapter in the Syrian conflict begins. With the capture of the last IS bastion in eastern Syria, the Americans may now actually begin pulling out their troops in earnest. U.S. President Donald Trump had always stressed that for him, the battle against IS was the only reason for the U.S. military presence in the war-torn nation. In December, he announced he would be pulling all 2,000 soldiers out of Syria. Heʹs now said he will be leaving a group of 400 soldiers there, but this does little to change the fundamental situation.

For the Syrian Kurds, the American withdrawal is a bitter blow. In the battle against the jihadists, the Syrian Kurdish YPG militia bore the brunt of the burden and suffered heavy losses. At the same time, U.S. weapons, advisors and air support in recent years allowed them to extend their dominance over large areas beyond the Kurdish settlement zone. This development was met with angry protest in Turkey, because the YPG is closely affiliated with the PKK guerrillas battling against the Turkish state for decades.

Absence of support for the Kurdish YPG

For the historian Jean-Pierre Filiu, choosing the Kurdish militia as an ally in the war against the jihadists was a mistake from the outset. "It required a huge lack of foresight to believe that a militia alien to the (Sunni-Arab) population of the Euphrates valley in its (Kurdish) composition and its (leftist) ideology would be able to stabilise the situation following the toppling of the Daesh pseudo-caliphate," wrote Filiu in Le Monde. This absence of support also explains why the battle against the IS militia made such slow progress in recent weeks, he continued.There were certainly good reasons why the U.S. chose the YPG as partners (not least Turkeyʹs unwillingness to itself tackle the jihadists). But it must have been clear from the outset that Turkey would never accept a situation where the Syrian PKK offshoot might gain a foothold along its southern border. This is why Turkey has launched military action against the YPG in northern Syria twice already, and President Recep Tayyip Erdogan has been threatening a new offensive for weeks. Following the U.S. troop pull-out he may well deliver on his pledge and carry out an attack.

In this situation, the Kurdish militia may have no other option but to seek the protection of President Bashar al-Assad and allow the government to return to Kurdish territories. "Facing a choice between a Turkish invasion and an agreement with the government in Damascus, the Kurdish group will certainly go for the latter and attempt to attain a form of genuine decentralisation as well as the integration of its own militia into government armed forces," says the German expert on Syria Volker Perthes.

The end of the Kurdish autonomy project 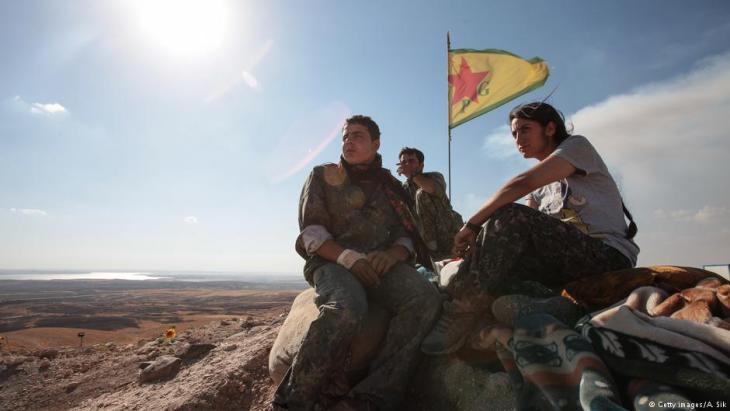 On a losing streak: for the Syrian Kurds, the withdrawal of the Americans is a bitter blow. In the fight against the jihadists, the Syrian Kurdish militia YPG have borne the brunt of the burden and suffered heavy losses. At the same time, the USA's weapons, advisers and air support have allowed the YPG in recent years to extend its rule over large areas outside the Kurdish settlement area

As a result, the end of "Islamic State" could also soon bring about the end of the Kurdish autonomy project in the northeast of the country. Assad has left no room for doubt when it comes to his plans to bring the whole of Syria back under his control. In negotiations with the Kurds to date, he has shown no willingness to grant them autonomy. Even though Assad wonʹt be keen to see Turkey occupying further areas of northern Syria, after the U.S. troop withdrawal there is little reason for him to fulfil the wishes of the Kurds.

So what should Europe now do in this situation? No one can be happy about the fact that after all the bloodshed, the person emerging victorious from the battle is Assad, the one who bears the greatest responsibility for the Syrian tragedy. But if Europe rejects reality, this will also be unhelpful: ultimately, Assad will not only remain in power, but he will also re-assert his control over the entire country. If the Europeans want to have an influence on the post-war order, there will be no way around talks with Assad.

Reconstruction aid as a means of exerting influence

Although it will go significantly against the grain for many, the Europeans should offer to assist in the reconstruction process. Neither the Russians, nor the Iranians or the Turks (let alone Assad) are in a position to finance the rebuilding of this ruined nation. Only the Europeans and the Gulf States can do this.

But they should deploy their aid as a way of exerting influence on the post-war order, linking it to strict conditions such as de-centralisation, a right to return for refugees, protection from expropriation and the engagement of civil society.

Not that the Europeans have any other choice: following the defeat of the jihadists, leaving the Syrians to their own devices in their ruined cities would be a guarantee of new conflicts and ultimately, the potential resurgence of IS.

The past enthusiasm of the Egyptians lives on in the Iraqis of today. But just as they were nine years ago in Cairo, current prospects in Baghdad are dim. A comparison by Birgit ... END_OF_DOCUMENT_TOKEN_TO_BE_REPLACED

Insults directed against Egyptian President Abdul Fattah al-Sisi have been particularly prominent among the hundreds of chants by Arab protestors in Algeria, Sudan, Iraq and ... END_OF_DOCUMENT_TOKEN_TO_BE_REPLACED

Beyond the latest crisis with Iran, current U.S. Middle East policy is nothing if not chaotic. Many fear that the Trumpian approach could irreparably damage future U.S. ... END_OF_DOCUMENT_TOKEN_TO_BE_REPLACED

Looking outwards with the knowledge from within: a conversation with the Iraqi writer Sinan Antoon on the future of his homeland. Interview by Lena Bopp END_OF_DOCUMENT_TOKEN_TO_BE_REPLACED

The terror attacks in Paris, Brussels and Berlin were all carried out by men radicalised in jail. In Germany, politics and the judiciary are trying out new approaches to prevent ... END_OF_DOCUMENT_TOKEN_TO_BE_REPLACED

The "maqama", a classical Arabic form of prose-poetry, is still almost unknown in Germany – as is the name of the 11th-century Baghdad poet Ibn Naqiya. A new translation has the ... END_OF_DOCUMENT_TOKEN_TO_BE_REPLACED
Author:
Ulrich von Schwerin
Date:
Mail:
Send via mail

END_OF_DOCUMENT_TOKEN_TO_BE_REPLACED
Social media
and networks
Subscribe to our
newsletter