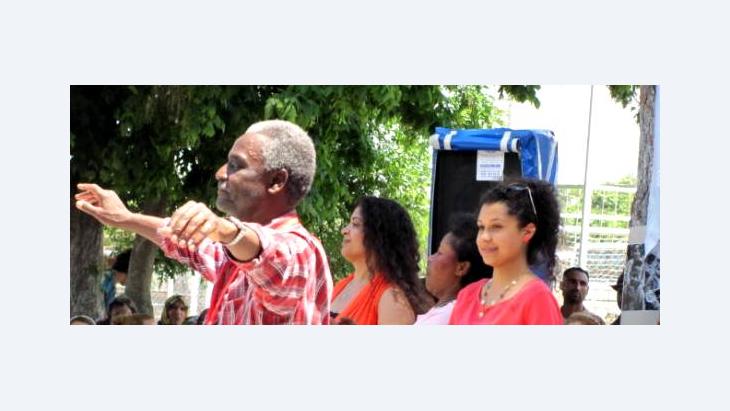 The Fate of the Afro-Turks
Nothing Left But the Colour

﻿The Afro-Turks, whose ancestors came to the Ottoman Empire as slaves in the nineteenth century, are still struggling for recognition. Now, though, their desire to assimilate into the wider society has become greater than their desire to maintain their own identity. By Ekrem Eddy Güzeldere

﻿A banner with the text "Sixth Spring Festival" hangs across the street near the park in Cirpi, a small village about 20 kilometres away from Bayindir, a regional centre south-east of Izmir. Such festivals have become common in Anatolia, with hundreds of them occurring between March and May every year.

But in Cirpi, it's something special. The Sixth Spring Festival is really the Sixth Festival of the Calf, the traditional celebration of the Afro-Turks, which they've been celebrating since the nineteenth century in and around Izmir, formerly known as Smyrna.

In 1924, the Turkish republic banned the celebration, and it was not until 2007 that the event could be re-established by the Association of Afro-Turks. The first five annual festivals were modest affairs, but the sixth turned into a big event with 400 participants. They've not yet slaughtered a calf though.

Between discrimination and assimilation

The Association of Afro-Turks was founded in 2006 by Mustafa Olpak in Ayvalik, in the North Aegean region. His family came to Turkey from Crete in 1924 as part of an exchange of populations between Greece and Turkey. Because they were Muslims, they were categorised as Turks. Olpak himself suffered bullying at school and dropped out for a year as a result, but he finished his education in the end. 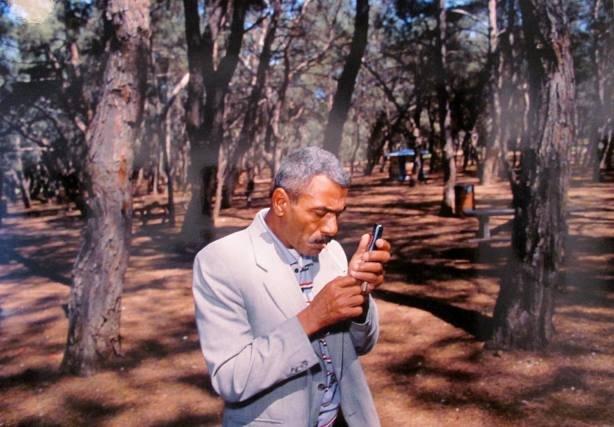 Mustafa Olpak: "The first generation has the experiences, the second generation denies them, and the third generation researches into them"

​​He had been married to a "white" Turk for 25 years when her family suddenly announced, "The Arab isn't going to get any of the inheritance." Black people are often called Arabs in Turkish. Olpak divorced his wife. It wasn't the only racist comment or example of discrimination which he'd experienced in his life.

Alev Karakartal, is an Afro-Turk woman who now lives in Istanbul. Speaking at a conference there in early June 2012, she described the strategy with which many Afro-Turks confront discrimination. "By entering into mixed marriages," she said, "Afro-Turks try to have lighter-skinned children, so that eventually their colour will disappear altogether." But Olpak responds, "We have nothing else left aside from the colour. There's nothing left culturally any more."

When Karakartal, who is herself of mixed descent, asked her parents about her origins, the answer was always, "We are Turks and Muslims," and that roots weren't important.

In Olpak's autobiography, he wrote, "The first generation has the experiences, the second generation denies them, and the third generation researches into them." That certainly applies to the Afro-Turks. Karakartal eventually started researching herself, and found the reasons for the shame and the silence.

"Our ancestors didn't come voluntarily to Anatolia," she notes. "They were sold as slaves, exploited, abused and excluded." But it's not just the families themselves who remain silent. Olpak points out. "Nobody speaks about us, otherwise, if they were to tell our story, they would find themselves in conflict with the official version of history. One would have to speak about slavery."

Slaves in the service of the Sultan 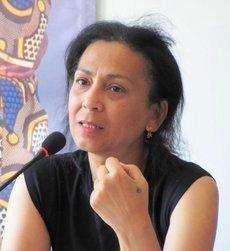 Alev Karakatal: "By entering into mixed marriages, Afro-Turks try to have lighter-skinned children, so that eventually their colour will disappear altogether"

​​Slavery in the Ottoman Empire has been little researched. This is surprising inasmuch as slavery extended over a long period – from the fourteenth to the nineteenth century – and affected hundreds of thousands of people. The best-known slaves were the janissaries, the elite troops of the Sultan, who were recruited among Christian boys taken from their families and given a strict training at court.

Aside from the eunuchs, these were mostly white slaves. There was not much trade in black slaves until the nineteenth century. That only started when European powers exerted pressure to ban the slave trade with the Balkans and the Caucasus. And it led to the import into the Ottoman Empire of some 10,000 African slaves every year between 1860 and 1890, adding up to a total of around 250,000 people.

The slave trade only finally came to an end at the beginning of the twentieth century, when slaves were replaced by paid household staff – a development which was seen as more chic and European. The fate of the freed slaves differed from region to region. In Aydin province, for example, it is said that the Ottoman bureaucracy itself concerned itself with the fate of the freed slaves, and provided 1,500 families each with a home, furniture, two oxen and some money to be getting along with.

As a result, for many years there were homogenous "African" villages in Aydin. But now there, too, the black residents have become a minority, and in the whole of the country they make up only a spot on the landscape. Olpak says, "On the Aegean coast I've met personally some 2,000 black people over the past few years." Most of the Afro-Turks are now in mixed marriages. 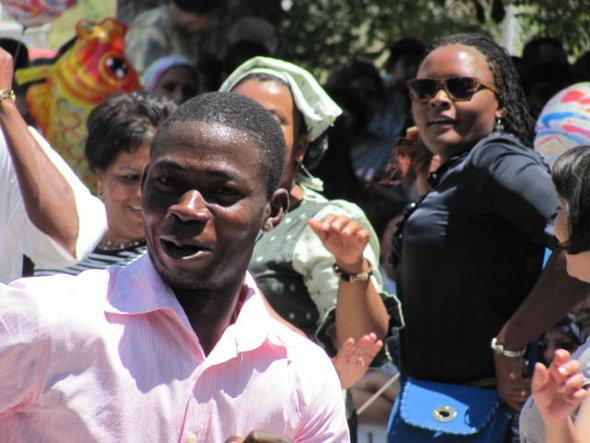 Slavery in the Ottoman Empire has been little researched although slavery extended over a long period – from the fourteenth to the nineteenth century – and affected hundreds of thousands of people. Pictured: Afro-Turks at the Sixth Festival of the Calf in Cirpi

​​In 2011, Elif Cici, a doctoral student at the Yeditepe University, did some research into the marriage patterns and the identity of Afro-Turks in three villages near Bayindir. As far as their identity was concerned, she found out that they had virtually no knowledge about their origins and the roots of their families.

When asked about their self-definition, the large majority said they defined themselves primarily as Turks. Only a minority saw themselves as "Turkish citizens with African roots." And the desire to be fully assimilated in society was more important than the maintenance of their identity. Cici found that, "Even though Afro-Turks don't admit it, both men and women prefer 'white' marriage partners."

But marriage is not the main problem for them. According to Karakartal, "Ninety percent of the Afro-Turks are poor, with little education. Most of the men have no job, and of course nor do the women. That doesn't mean that the blacks are less intelligent or talented, it just means that they haven't got a chance."

But there are positive developments, especially as the result of the voluntary efforts of the members of the Association of Afro-Turks. One of their current priorities is the development of oral history projects. A hundred Afro-Turks have been interviewed as part of an EU-financed project called "Voices of a voiceless past". And the state television has taken Olpak's autobiography as the basis for a documentary film.

In 2010, a well-known publisher, Osman Köker, organised a travelling exhibition about the history of the Afro-Turks. A new exhibition was opened at the 2012 conference in Istanbul, featuring the pictures and life stories of several Afro-Turks. Young Afro-Turks and "white" students, like Elif Cici, have made the topic the subject of their masters and doctoral theses. They are not only increasing knowledge about the Afro-Turks, they are also increasing the likelihood that that there will in the end be more left than just the colour.

Organised by interfaith NGO Religions for Peace, an international conference in Lindau on Lake Constance is dealing with the peace-building role of women inspired by the faith of ... END_OF_DOCUMENT_TOKEN_TO_BE_REPLACED

The small East African nation of Djibouti has so far evaded musical discovery by the West. Now, however, the country's official national band, Groupe RTD, is picking up ... END_OF_DOCUMENT_TOKEN_TO_BE_REPLACED

The end of July saw the launch of the African Union’s "Sauti" digital publication, the first young feminist platform in Africa, which this year showcases stories by female youth ... END_OF_DOCUMENT_TOKEN_TO_BE_REPLACED

The outpouring of solidarity worldwide following the violent death of George Floyd should prompt us to step back and fundamentally question racist structures and privileges based ... END_OF_DOCUMENT_TOKEN_TO_BE_REPLACED

Jeddah is very different from other cities on the Arabian Peninsula, says Ulrike Freitag, historian of the Modern Middle East. In her book "A History of Jeddah", she explores the ... END_OF_DOCUMENT_TOKEN_TO_BE_REPLACED

Comments for this article: Nothing Left But the Colour

Greetings! This timely article creates a significant cultural connection for me; you see six years ago i participated in a paternal genome project with a geneticist in Brooklyn NY and discovered that my paternal roots were in Turkey! However, my place of birth is Panama via Jamaica and Barbados.

Now i have more reason to fulfill a desire to travel to Turkey, meet these scholars and learn more about the presence of Africans in that country.

END_OF_DOCUMENT_TOKEN_TO_BE_REPLACED
Social media
and networks
Subscribe to our
newsletter