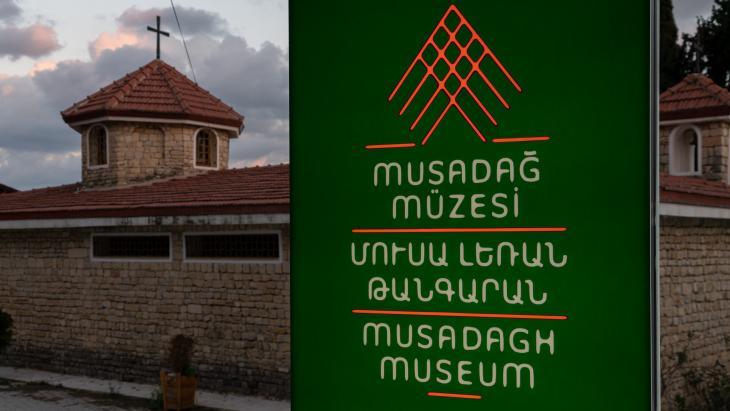 The fate of the Armenians
Vakıflı: The last Armenian village in Turkey

The village of Vakıflı (population 150) in the southern Turkish province of Hatay near the Syrian border is the last remaining Armenian village in Turkey. Lately, interest in the town and the history of Armenians has been growing. By Jochen Menzel

The taxi driver from Samandağ, a town near the ancient site of Seleucia Pieria, was amazed when in June 1992 we asked him to drive us up the mountain Musa Dagh. We were in search of the "Mountain of Moses" described by Franz Werfel in his famous Armenian novel The Forty Days of Musa Dagh.

We didn't get very far, because the road soon ended at a field. After we started talking about the Armenians, however, our driver evidently realised what we were interested in seeing. So he took us to the small village of Vakıflı, or Vakıflı Köy as it is known in Turkish. We could already tell upon arriving at the little church with its steel-framed bell tower and small cemetery full of old graves that we now found ourselves in the only remaining Armenian village in Turkey.

We stopped at a two-storey stone house that was once the school and focal point of the village. Men and women sitting together in front of the church invited us to join them for a mocha coffee. Before we drove on, we also had to taste the plums, a variety called yeşil erik, which many hands had picked from the tree.

Service in the Church of the Holy Mother of God

Fast forward to many years later. It's Sunday, 1 March, at ten o'clock in the morning. Bells are calling the faithful to pray at the Church of the Holy Mother of God, Surp Asdvadzadzin in Armenian, which is held here every fortnight. The modest church with its two small spires has in the meantime been completely modernised. Between 1994 and 1997 it was restored by the village community with the support of the Armenian Patriarchate in Istanbul and the Turkish government. In front of it is now a small paved square with trees. The outer wall is decorated with two khachkars, typical Armenian memorial stone steles with a cross carved in relief in the middle. The church interior, in a modern design with an altar, is concealed by a curtain for Holy Week. As usual, the priest has come over from the nearby port town of Iskenderun, where he serves a small Armenian congregation. 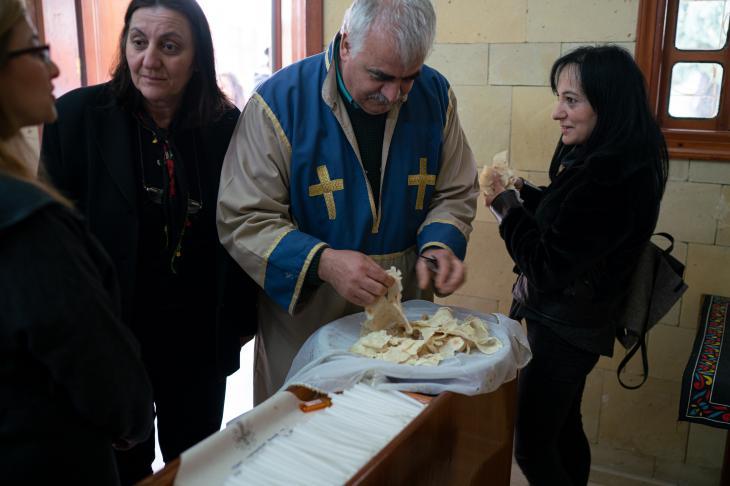 The priest from Iskenderun and members of the local church congregation share traditional lavash bread after the Church service in the village of Vakıflı. The Church of the Holy Mother of God, "Surp Asdvadzadzin" in Armenian, was restored between 1994 and 1997 by the village community with the support of the Armenian Patriarchate in Istanbul and the Turkish government

The church is crowded today, because the service is dedicated to the memory of a parishioner who passed away 40 days ago. After a sung liturgy lasting nearly two hours, the congregation goes outside. Small pieces of blessed lavash bread are distributed at the exit. We follow the priest through an ornate wrought-iron gate into the cemetery for devotions.

The custom here – as it is among Muslims – is to commemorate the deceased by distributing food to be eaten together. And so, the service is followed by a shared meal, eaten in the new parish hall next to the church.

The transformation of a village

It's not only the church that has changed since our last visit. The village too, which perhaps still has around 150 inhabitants, has been redeveloped. The old schoolhouse along with two additional buildings has been converted into a bed and breakfast. And a museum on the history of Armenian villages on Musa Dagh has been set up in the basement of the community centre with the support of the Turkish Ministry of Culture and the Armenian Patriarchate. Inside, an Armenian association exhibits objects, pictures and texts with academic, diplomatic caution. The opening has unfortunately been postponed due to the pandemic.

In the old square in front of the former schoolhouse, a women's cooperative has established a sales outlet for handicrafts, jams, wine and spices. Somehow, the women have to live and to pay the expenses for the priest from Iskenderun from the meagre proceeds. A short way down the road, where the minibus to Samandağ stops, there is a tea garden offering breakfast and small snacks.

In the summer months, life returns to the quiet village for a few weeks thanks to the festivities and weddings held here. People whose ancestors once lived here want to go back their roots and homeland, to have their children baptised here and their marriage blessed according to the Armenian rites. But worries are also part of everyday life in the village. Young people are leaving, dreaming of a better education, work and a future in Europe, America or just Istanbul. The old folks are left behind. 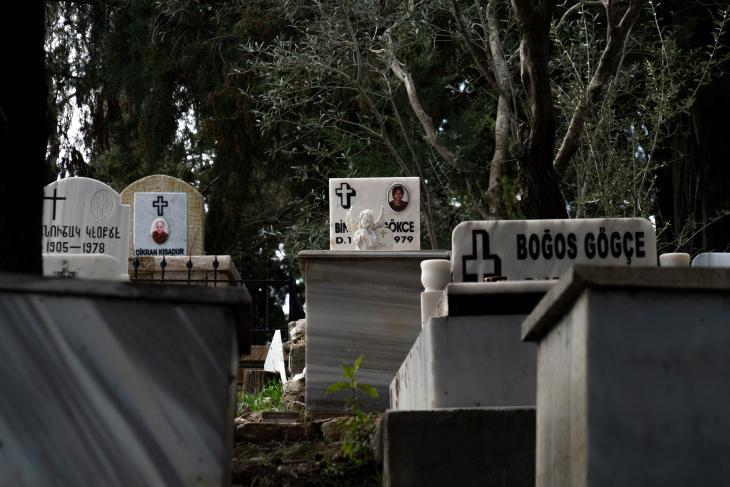 Graveyard in the village of Vakıflı. According to Jochen Menzel, "the history of Christian and Armenian settlement in this region is also a story of the early Christians, to which the four churches in Samandağ still bear witness today. But the history of the Armenian villages on Musa Dagh comes to an almost complete end with the year 1915, the beginning of the brutal expulsion of the Armenian population of Anatolia"

The Armenian villages on Musa Dagh

There are thus few reminders left today at the foot of Musa Dagh. Visitors still come to Hıdırbey, the village neighbouring Vakıflı, to see the centuries-old sacred Tree of Moses. A few restored buildings provide a glimpse of Armenian history.

Further up the mountain is the village of Yoğunoluk, which is described in detail in Werfel's novel. A small mosque now stands on the foundations of a former Armenian church there. The next village, Batıayaz, features an impressive unfinished three-aisled church. This sacred building was meant to stand for a new beginning when the Armenians who had once fled returned to their villages after the First World War. The Hatay region, together with modern-day Syria, was part of the French protectorate until 1939. But when the province was then incorporated into the Turkish Republic that year, mistrust returned. Most Armenians emigrated to Lebanon or Syria.

The "Vapur" memorial on the high plateau

The plateau at the summit of the 1,355-metre-high Musa Dagh is a site of Armenian identity and the main setting in Franz Werfel's novel The Forty Days of Musa Dagh. The inhabitants of six Armenian villages gathered here in September 1915 to escape deportation by the Ottoman army. To draw attention to their plight, they hoisted a huge home-sewn flag bearing a red cross and the words "Christians in Danger", which was visible far out to sea. The French warship Guichen spied the flag and succeeded with the help of four additional warships in evacuating some 4,000 Armenians to Port Said in Egypt a few days later. An account of the dramatic events is also given in a 1916 report by the German theologian and Orientalist Johannes Lepsius. 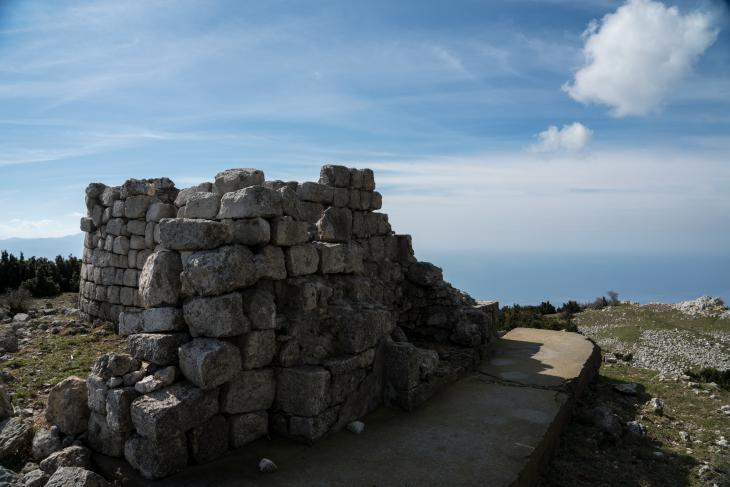 The "Vapur" memorial on Musa Dagh. Vapur, meaning ship, commemorates the evacuation of 4,000 Armenians to Port Said in September 1915. The inhabitants of six Armenian villages gathered here in that month to escape deportation by the Ottoman army. "To draw attention to their plight," writes Jochen Menzel, "they hoisted a huge home-sewn flag bearing a red cross and the words 'Christians in Danger', which was visible far out to sea. The French warship Guichen spied the flag and succeeded with the help of four additional warships in evacuating some 4,000 people […] a few days later." The memorial was constructed in 1932 to mark the 17th anniversary of the expulsion of the Armenians

Today, after a climb of several hours, we reach this high plateau. We come upon a memorial, popularly known as Vapur, meaning ship, which commemorates the evacuation. Rough-hewn stones in the shape of a ship, two metres wide and four to five metres long, were piled on top of each other in 1932 to mark the 17th anniversary of the expulsion of the Armenian returnees. On the western edge of the plateau, which slopes steeply down to the sea, we look out over the hazy horizon where a large ship is cruising. It might be a Russian vessel bound for Latakia or the naval base in Tartus, Syria.

Tourists come to see the church and museum

Back to Vakıflı village. The weekend is approaching and the few restaurants in the area are preparing for guests. Interest in Vakıflı and its Armenian history is growing. Tourists come here to see the small church and the cemetery, or they stand in front of the still closed museum. Their faces betray inquisitiveness, a tentative optimism. Perhaps some contemporary witnesses or their descendants can still be found here?

Part of this hopeful development is the small museum that is waiting to open. It can be seen as a sign that social discourse is still possible even under difficult conditions. People want to get a close-up impression of Anatolia's history, which has been shaped so significantly by its large and important Armenian community.

Home
Print
Newsletter
More on this topic
The German Empire and the Armenian genocide: Turning a blind eyeThe AKP's version of Turkish history: Contrasting interpretations of Gallipoli"Karin" – an Armenian-Turkish music project: From deportations to duetsTurkey says it will respond in time to "outrageous" US genocide statementIn historic vote, US House recognises "Armenian genocide"
Related Topics
Armenians, Christianity, Christians in the Islamic world, Church, History of the Near and Middle East, Minorities in the Muslim world
All Topics

In this unusually beautiful book of images and text, published in German and Arabic, artist Marianne Manda presents her own unique take on the megacity of Cairo. In over fifty ... END_OF_DOCUMENT_TOKEN_TO_BE_REPLACED

A stage, lights, a mesmerised audience: it looks like an Egyptian folkloric concert, but Umm Sameh is singing to heal the sick by driving out the demons that possess them END_OF_DOCUMENT_TOKEN_TO_BE_REPLACED

Russia's ranking on the World Press Freedom Index has fallen again over the Kremlin's wartime censorship of the Ukraine conflict. From Myanmar to Mexico, journalists continue to ... END_OF_DOCUMENT_TOKEN_TO_BE_REPLACED

From the Euphrates to the Mekong, dams that ensure one country's water supply risk leaving others parched. But shared water resources can be a source of peace as well as conflict ... END_OF_DOCUMENT_TOKEN_TO_BE_REPLACED

For over fifty years, British photographer Peter Sanders travelled across the Middle East and further afield, seeking out the saints of Islam. His work uncovers a little-known ... END_OF_DOCUMENT_TOKEN_TO_BE_REPLACED
Author:
Jochen Menzel
Date:
Mail:
Send via mail

END_OF_DOCUMENT_TOKEN_TO_BE_REPLACED
Social media
and networks
Subscribe to our
newsletter