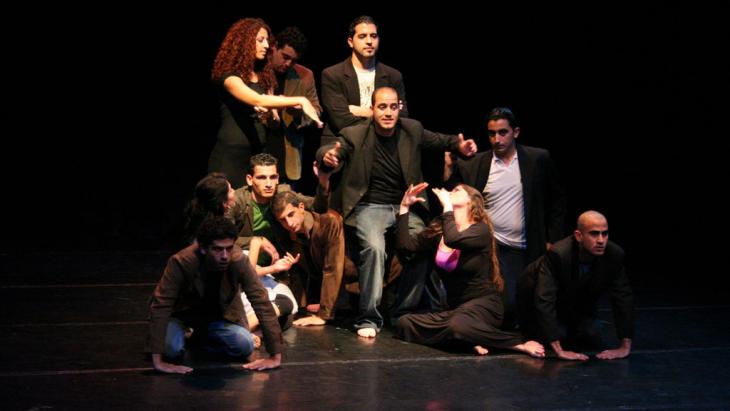 The Gaza conflict
Can art heal in a time of war?

War alters societies, and art can serve to gauge the change. In the war-struck Middle East, artists are hindered in their work, and some are forced to emigrate. Some feel a sense of hopelessness, while others still firmly believe in the healing capacity of art. Ulrike Schleicher reports on different reactions to the current crisis within the artistic community

Sayed Kashua, an Israeli-Arab writer and columnist for Israel's oldest daily newspaper "Haaretz", left his home in Israel last month. What was supposed to be a short stay in the United States turned into a permanent move.

The war between Hamas and Israel means Kashua cannot go back. The conflict between the two sides has flared up again and again, but this time it has done so with such vehemence that it has cost many innocent civilians their lives.

More than that, it's the hate Kashua senses in his country that, after 25 years of writing about "the hope of co-existence", has led him to give up this dream. "When Jewish youths walk down the street and demand the death of Arabs simply because they're Arabs, then I've lost my own small battle," wrote the 39-year-old in one of his columns.

Kashua is not the only one who is convinced that the current violent conflict is leaving a deeper mark on society than those before it. Many blame this on the murder of three young Jewish men and a 16-year-old Palestinian.

According to Israeli writer Assaf Gavron, this kind of brutality has charged the atmosphere and caused taboos to be broken. He says that like his friends, he feels "sadness, fear and frustration" about the current situation. In order not to be overcome by these negative emotions, the 45-year-old writer says he lives in two worlds. "I totally separate work and everyday life; that more or less works."

Others respond by stepping into the spotlight and speaking out. Director Shira Geffen is one example; she recently participated in the Jerusalem International Film Festival and, together with other filmmakers, demanded a ceasefire and asked the audience to remember the dead children in Gaza. In response, Israel's Culture Minister Limor Livnat posted in Facebook, "Such people are a shame to the state." Geffen wasn't deterred and posted in reply: "Pardon me, but can I no longer show a bit of humanness?" Israeli society has sunk very low, she added.

"When Jewish youths walk down the street and demand the death of Arabs simply because they're Arabs, then I've lost my own small battle," wrote author and columnist Sayed Kashua about the current crisis in Gaza

When it comes to suffering, the Palestinian people have long since reached the abyss, says George Ibrahim, founder and director of Al-Kasaba Theater in Ramallah. He is shocked at what people are doing to each other: "It's unbearable." In times like these, Palestine's arts scene naturally takes a back seat. "Everyone is full of anger and sadness," he says.

He says that he understands the shift in priorities, but still encourages artists to continue with their work, adding, "Culture and creativity have to have a place. It's difficult, but otherwise everything is lost."

Mohammed Dajani, a former professor at Al-Quds University in East Jerusalem, holds a similar opinion. He experienced first-hand how his society deals with those who think differently. In his spare time he worked on an academic project aimed at bringing about reconciliation between Jews and Palestinians, which involved a trip to the concentration camp Auschwitz with young Palestinians.

Because of that, Dajani became a target; he was accused of being a traitor and forced to leave the university. Nevertheless, Dajani is convinced that peace is possible. "We have to learn from and talk with each other," he says. 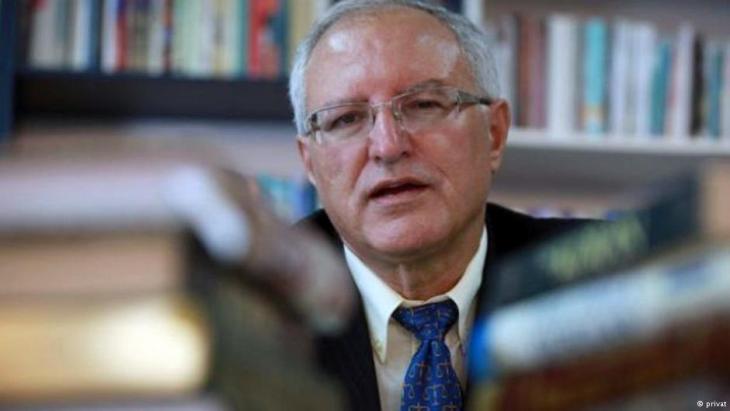 Despite having felt the rejection of society for working to bring about reconciliation between Jews and Palestinians, Mohammed Dajani, a former professor at Al-Quds University in East Jerusalem, is convinced that people on both sides of the divide "have to learn from and talk with each other"

Then there are those who belong to Israeli society but keep a distance to current events due to their own biographical backgrounds, like German author Sarah Stricker, who has lived in Tel Aviv for the past five years. She says her feelings are chaotic and she's ashamed that her family and friends back home worry about her safety, "although life here continues as normal."

On the other hand, she doesn't feel able to live a normal life. "Every morning I sit at my desk and try to work, but I can't, because the moment I feel like I'm in the flow, a siren goes off. And sometimes the siren doesn't go off, but you're waiting for it to go off any second," says Stricker, adding that she feels a sense of anger that goes beyond the two conflicting parties. "If the bloodshed continues, the international community is at fault for not doing anything except politely asking both sides to please stop killing each other."

The only thing that helps her get herself together, the 33-year-old said, is writing. Still, war inadvertently finds its way into her novel: "the way war forces itself into every story and every conversation."

Tuvia Tenenbom, an Israeli-born, New York-based writer and dramatist, is particularly critical of the media. "Foreign reporters speak neither language and have no idea what's going on here," he says, adding that while some reporters go to hospitals in Gaza and film the wounded under the guidance of the Hamas, others sit in posh hotels in Tel Aviv and criticise Israel.

Zubin Mehta, music director of the Israel Philharmonic Orchestra, has a clear statement as well: "I love the country, but not the government." They make many mistakes and lack courage, he adds. The 78-year-old actively strives for Jewish-Arab reconciliation: six years ago he founded a music school in two cities on the border to the Gaza Strip, where both Palestinian and Israeli students could study. If the maestro could have his way, he would conduct "Beethoven and Mozart in Ramallah and Gaza." While the region is torn, he is convinced that "music can heal".

Whenever that healing process finally gets underway, it might be too late for Sayed Kashua. He not only left his country behind, but also his language: "I won't write in Hebrew anymore," he says.

Asmaa al-Atawna's debut novel "Missing Picture" has been published in German translation (Keine Luft zum Atmen – Mein Weg in die Freiheit). In it, she describes life in Gaza from ... END_OF_DOCUMENT_TOKEN_TO_BE_REPLACED

At the end of every year, the team at Qantara.de gives you a run-down of the ten most-read articles on the site over the past 12 months. Here is a quick overview of the stories ... END_OF_DOCUMENT_TOKEN_TO_BE_REPLACED

Palestinian Christians are an integral part of the Palestinian national movement. This is the conclusion reached by the Chilean-born Palestinian political scientist Xavier Abu Eid ... END_OF_DOCUMENT_TOKEN_TO_BE_REPLACED

Jesus – Issa in Arabic – doesn’t merely enjoy the highest place among the prophets in the Koran. He is also revered in Islam’s mystical tradition for his message of love and mercy ... END_OF_DOCUMENT_TOKEN_TO_BE_REPLACED

With reported hostilities against Israeli journalists and the flag of the Palestinian territories flying on the streets and in the stadiums, it is clear the World Cup in Qatar is ... END_OF_DOCUMENT_TOKEN_TO_BE_REPLACED
Author:
Ulrike Schleicher
Date:
Mail:
Send via mail

END_OF_DOCUMENT_TOKEN_TO_BE_REPLACED
Social media
and networks
Subscribe to our
newsletter