The "Gaza Monologues"
What the War Does to People

Subtitled "What has the war done to you", the "Gaza Monologues" provide shocking insights into the lives of young people in Gaza. The play was performed simultaneously in 40 cities throughout the world. Bettina Marx reports 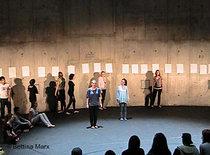 "Our dream is to die a good death, not to lead a good life": rehearsals for the "Gaza Monologues" in Berlin, Germany

​​ High grey concrete walls delineate the semi-circular stage in Hall C at Berlin's Schaubühne theatre. They serve as a sparse but imposing set for the play "Gaza Monologues", being performed here on one single occasion. The audience is representative of a broad social mix, with the front rows reserved for personnel at embassies representing Arab nations in the German capital.

The young actors are barefoot. They are just wearing jeans and T-shirts, most of the girls have long hair loosely tied back or pinned up.

The texts include quotes such as this: "Our dream is to die a good death, not to lead a good life," or: "Who will come to my funeral?" Or: "I want to die whole, not be torn into a hundred pieces." 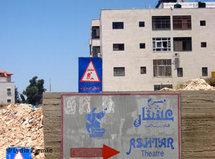 The play was initiated by "Ashtar", a non-governmental organisation that offers acting courses in Ramallah, East Jerusalem and Gaza, and is working on the development of Palestinian theatre

​​ These are monologues brimming with fear and desperation, but also full of dreams. They were written after the war in Gaza in at the turn of 2008/2009. Subtitled "What has the war done to you" they provide shocking insights into daily lives during the war and thereafter.

The idea for the production originates from "Ashtar", a non-governmental organisation that offers acting courses in Ramallah, East Jerusalem and Gaza, and is working on the development of Palestinian theatre. Because the youngsters are not able to leave the Gaza Strip, Ashtar managed to convince more than 40 theatres across all continents to present the texts simultaneously with young local actors.

The Berlin production involved youngsters from various youth theatres. The play was staged by theatre director Lydia Ziemke and acting tutor Uta Plate. The chance to work on the play with these young people was a fantastic gift, comments Plate.

The youngsters had just 11 days to rehearse the play, says director Lydia Ziemke. But before they could begin, they had to learn a great deal about Gaza and its residents, about the war and everyday life.

"The first major experience was to establish how wonderful it is to get acquainted with the daily lives of the people, to hear personal stories beyond the confines of politics, state entities and walls," explains Ziemke. "The central question was: how are our contemporaries faring?" The director goes on to say that this was the greatest motivation for her, to discover this and personally relate to what she found. 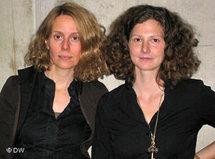 ​​ Moreover, the youngsters did not know much about the situation in Gaza: "We tried to get this across slowly over the course of several discussions. Of course, it's all very complicated," recalls the director.

The young actors were attuned to the lives of their contemporaries in the Gaza Strip during a collective weekend. During the weekend, the question repeatedly arose: "What would it be like if there was a war here?"

It was not easy for the young people to gain a real sense of this very different world. Speaking after the performance, 17-year-old Sophia says she had not known much about the Gaza Strip. She says that despite this, the experiences of her contemporaries had had a great impact on her. For her performance, she deliberately selected the monologue of Fatima, a young Palestinian woman who describes her dreams. Sophia says they are dreams that she can also closely identify with.

Mohammed's experience was quite different – after all, he is Palestinian. His father comes from the West Bank and his mother from a refugee camp in Lebanon. He was himself born in Germany and participates in the theatre initiative "Grenzen-Los" ("Border-less") in the Berlin district of Moabit.

Mohammed reports that working on this play about young Palestinians was a highly emotional experience. At the same time, he says he was delighted at the interest and commitment of his fellow actors, who plagued him with questions about Palestine and the Palestinians, but also about his own life in Germany.

There has only been one performance of the "Gaza Monologues" in Berlin so far. But both directors would very much like to see it performed again. It is due to be staged again by another ensemble in New York on 29 November, the International Day of Solidarity with the Palestinian People, on the sidelines of a UN meeting.

But the greatest dream of Lydia Ziemke and Uta Plate would be to invite the youngsters from Gaza to Berlin, and see them join forces with their German contemporaries in a theatre project.

Theatre in the West Bank
Fragments of Freedom
Most of them have never been outside their refugee camp on the West Bank. But now the Palestinian theatre students of the "Freedom Theatre" are discovering Germany and Austria. Kristin Hendinger went to see their most recent play, "Fragments of Palestine"

Cinema Jenin
A Small Cinema is Big on Reconciliation
It was once one of the loveliest cinemas in Palestine, then spent years as a ruin: Cinema Jenin. Now, a German has rebuilt it with the support of the Goethe Institute. In August, a movie theatre showing far more than films will open in the northern Palestinian city. Maxi Leinkauf reports from Jenin

END_OF_DOCUMENT_TOKEN_TO_BE_REPLACED
Social media
and networks
Subscribe to our
newsletter