Many Bamars – Myanmar’s majority ethnic group – view the current crisis as a conflict between the generals and Aung San Suu Kyi. But with the young generation, raised on the smartphone and the Internet, we could see more than just a return to the division of power between the NLD and the military.

These young people have international connections, with many of them seeking inspiration from mass student protests in Hong Kong and Thailand. The role played by social media cannot be underestimated: to date, the Internet and first and foremost Facebook, a synonym for the web in Myanmar, has served as a key resonance space for Generation Z, a space that they also use for mobilisation.

This is the view of the German daily taz, which has since 2013 invited a total of 45 journalists from Myanmar to attend workshops in Berlin and has access to numerous sources in Myanmar. When the military tried to block access first to Facebook and then the entire web just a few days after the coup, this did more to mobilise the young than anything else. For many, a life without Facebook is inconceivable.

On the other hand, social media have also served as a key propaganda instrument for Buddhist nationalists using Facebook to spread their Islamophobic propaganda – for example, furnishing the Islamophobic film "Fitna" with Burmese subtitles. "Fitna" proved to be extremely popular with young people.

Someone who also claims to be a big fan of Geert Wilders and his film is the Buddhist monk Ashin Wirathu, described by Time Magazine in 2013 as the "face of Buddhist terror". He was the driving force behind the anti-Muslim pogroms of 2013. Wirathu is just the tip of the iceberg – many Buddhist monks in Myanmar regard Islam as a huge threat to the nation, despite the fact that Muslims make up less than five percent of the population. 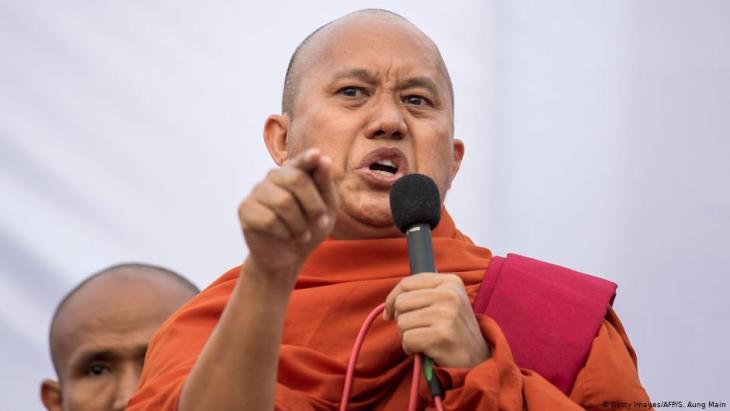 The "face of Buddhist terror": Wirathu is just the tip of the iceberg – many Buddhist monks in Myanmar regard Islam as a huge threat to the nation, despite the fact that Muslims make up less than five percent of the population. Although not all of the country’s half a million monks are as radical as Wirathu, many weave history into their arguments, preaching that nations like Afghanistan or Indonesia used to be Buddhist and that Myanmar is facing the same threat of “Islamisation“ if no action is taken to halt the process

Not all of the country’s half a million monks are as radical as Wirathu and call for violence against the minority. But many weave history into their arguments and preach that nations like Afghanistan or Indonesia used to be Buddhist and that Myanmar is facing the same threat of “Islamisation“ if no action is taken to halt the process. The military junta released Ashin Wirathu from prison in mid-February as part of a mass amnesty.

"The Buddhist monks influence the people here, no leading politician can afford to have them as their enemy," says 69-year-old Khin Zaw Win. The political analyst lives with his family in Bauktaw, a suburb of Yangon. This is the place where a few years ago, the radical 969 Movement led by Wirathu was still calling for a boycott of Muslim shops and businesses.

COVID-19 has many negative impacts on children, particularly in terms of education and healthcare. Development projects in the Indian state of Assam show how actors can ... END_OF_DOCUMENT_TOKEN_TO_BE_REPLACED

Authorities in Bangladesh started sending a first group of more than 1,500 Rohingya refugees to the isolated island of Bhasan Char, despite calls by human rights groups for a halt ... END_OF_DOCUMENT_TOKEN_TO_BE_REPLACED

The first hearings at the International Court of Justice reflect the entrenched positions in the Rohingya crisis. Rodion Ebbighausen believes the trial may finally help to soften ... END_OF_DOCUMENT_TOKEN_TO_BE_REPLACED

Myanmarʹs Aung San Suu Kyi and Hungaryʹs Viktor Orban have discussed their mutual fear of Muslims. In doing so, the Burmese leader has again showed she has lost the moral standing ... END_OF_DOCUMENT_TOKEN_TO_BE_REPLACED

Fatima was gang-raped during attacks on Rohingya Muslims as part of Myanmar's ethnic cleansing campaign. Now, she and her family live in a camp in Bangladesh with few prospects, ... END_OF_DOCUMENT_TOKEN_TO_BE_REPLACED

Islamophobia is rife in Sri Lanka, Myanmar and Thailand, with Buddhist monks heading up the hate campaigns against Muslims. Yet the roots of the conflict run deep. A report by ... END_OF_DOCUMENT_TOKEN_TO_BE_REPLACED
Author:
Dominik Müller
Date:
Mail:
Send via mail

END_OF_DOCUMENT_TOKEN_TO_BE_REPLACED
Social media
and networks
Subscribe to our
newsletter