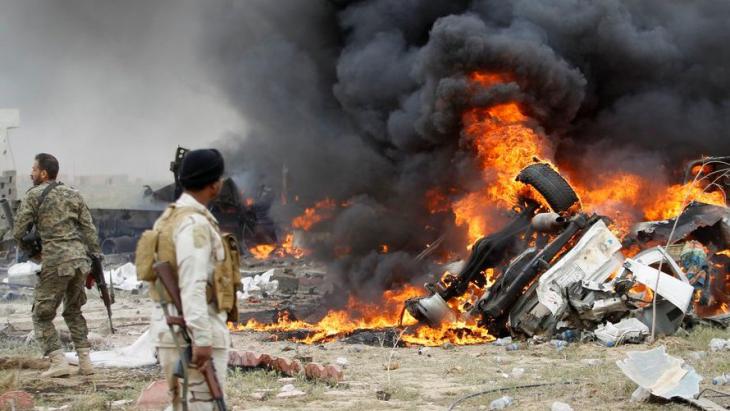 Indifferent superpowers and old rivalries: the megatrend in today's Middle East is the dissolution of a regional order. An analysis by Volker Perthes

Never make predictions about the course of the Middle East. In an uncertain environment, the soundest tool to prepare for the future is often to simply study the trends that we already see. While trends tend to shift, or to be broken, they nonetheless constitute strong currents which impact on the future flow of events and also frame the thinking of policymakers.

The current megatrend in the Middle East seems to be the dissolution of a regional order. With no one around to put it together again: external powers are unlikely to design a new "Sykes Picot"; regional decision makers seem unable as yet to gather for a "Vienna Congress" of sorts and establish their own regional security system.

In a number of respects, the political landscape between the Mediterranean and the Persian Gulf has ceased to be the Middle East that we used to know. This certainly applies state-society relations, but also to the geopolitical level. Here are five geopolitical trends that seem particularly relevant:

Renunciation instead of intervention

Firstly: International players try to keep out. In contrast both to the more aggressive American approach under George W. Bush and the European Union's post-2011 transformation agenda, external actors have largely given up on projecting ideas and order into the region. International actors will still defend vital interests in the region. But in the main, their approach is about containing risks and threats inside the region, enable local partners, and, if possible, resolve problems that could entail the risk of being drawn into regional conflicts. Consequently, international members of the Coalition against the so-called Islamic State (IS) try to limit their military involvement to airstrikes and training, while leaving the fighting on the ground to local forces. For Europe and the US, this may go along with a renewed prioritization of stability over political transformation and human rights, which ironically brings them closer to the approaches of Russia or China. 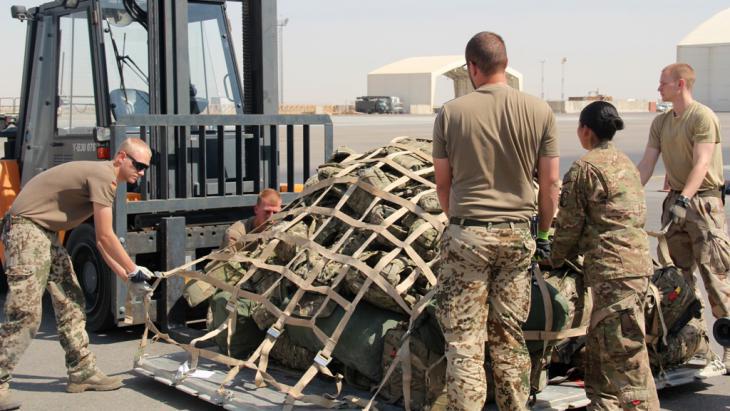 Phased withdrawal: NATO's ISAF combat mission to Afghanistan ended at the close of 2014 after 13 years. It was replaced by a non-combat training, advice and assistance mission "Resolute Support", for which just 12,000 foreign troops are set to remain in the Hindu Kush, among them just under 9,000 Americans and up to 850 Germans

Secondly: balances shift, no sustainable alliances emerge. Some of the power shifts are clearly more than ephemeral. Thus, for the first time in the contemporary Middle East, neither Iraq nor Syria is among the active players on the regional scene. Rather, the two countries – Syria even more so than Iraq – have become the space where all political, geopolitical and confessional conflicts converge. Egypt is largely occupied with itself, and unlikely to resume a regional leadership position for some time to come. Saudi Arabia and Iran have emerged as the main regional antagonists, rather than becoming the protagonists of a regional concert of powers.

In fact, neither the bloody conflict in Syria nor the region-wide confessional polarisation will calm down or come to an end without some understanding between Riyadh and Tehran. The majority of the regional states are now battling the so-called Islamic State. But they find themselves in a brittle coalition of inconvenience, rather than an alliance. The idea that a grave common threat, such as the emergence of the IS, would help regional actors to overcome their rivalries is obviously unfounded. Consider only the relationship between Riyadh and Tehran, Cairo and Ankara, or even Riyadh and Doha. In today's Middle East, the enemy of my enemy may still remain – my enemy.

From two-state solution to one-state reality

Thirdly: civil wars are no longer contained. The Middle East has for a long time been able to cope with – and even tolerate – various civil wars because they were more or less contained within the borders of the respective state. Consider the long civil wars in Lebanon, in Algeria, in Sudan, in Iraqi Kurdistan, or in Yemen. This is no longer the case. The wars in Syria and Iraq have migrated across borders; and borders – particularly between Iraq and Syria, but also between Syria and Lebanon are losing relevance.

Fourthly: the Israeli-Palestinian conflict loses relevance for the region, but not for Israelis and Palestinians. The conflict between Israel and the Palestinians remains virulent – remember the 50-day war between Israel and Hamas in the summer of 2014 – and it is unlikely to be settled in the near future. New violence is more likely than an agreement on a two-state solution. However, in contrast to most of the past six decades, the Israeli-Palestinian conflict is no longer the main mobilising issue in most parts of the region. This may add to a false sense of calm on the Israeli side. Israel's deterrence has strengthened, and its economy is strong. But unless a new Israeli government really accepts to give up control over the Palestinians, Israel may miss the opportunity of another U.S. mediation effort and sleepwalk into a one-state reality.

Expanding conflict zone: "The IS is not simply another terrorist group. In order to deal with and ultimately defeat it, we need to understand it as what it is, namely a jihadist state-building project. It is a totalitarian, expansionist, and hegemonic project for a state that tries to recreate a number of features of the defunct security states in Syria and Iraq, but rejects the state system as such and will certainly not apply for membership in international institutions," writes Perthes

Fifthly: new quasi-sovereign entities emerge. The weakness of states in the Middle East is not so much due to the frailty of state and security apparatuses or the lack of resources as to a lack of inclusiveness. In Syria and Iraq, the failure of two would-be strong states has led do the emergence of new territorially based quasi-sovereign entities. Similar developments may occur in other countries. It is relatively easy for the regional or the international community to deal with an entity like the Kurdish Regional Government (KRG) in Iraq which is already treated as a de-facto state actor by a number of governments, or even with the Kurdish cantons in Northern Syria. These entities aspire to be included into the regional and international system. The so-called Islamic State constitutes a totally different and much more dangerous phenomenon.

The IS is not simply another terrorist group. In order to deal with and ultimately defeat it, we need to understand it as what it is, namely a jihadist state-building project. It is a totalitarian, expansionist, and hegemonic project for a state that tries to recreate a number of features of the defunct security states in Syria and Iraq, but rejects the state system as such and will certainly not apply for membership in international institutions.

The bombing campaign of the US-led Coalition may succeed in inhibiting its further expansion. But the IS is likely to remain a military, political, and ideological threat to regional states and societies as long as no credible, inclusive governments are established in Baghdad and Damascus; as long as no appealing counter-narrative emerges from Saudi Arabia whose Wahhabist school of Islam remains the source of ideological inspiration for the IS; and as long tensions between Saudi Arabia and Iran continue to feed confessional polarisation in the region.

One of the rare, positive developments in the region is the rather smooth transition to a new leadership in Saudi Arabia after the demise of King Abdullah. Effectively now, power in the Kingdom has moved to the next generation – a move that many observers have deemed almost too difficult to succeed for many years. Leadership chances always involve opportunities: King Salman and his team could also adjust Saudi Arabia's regional relations and open new pages with old adversaries such as Iran. In practice, however, we should expect that the new leadership will first be tested by regional as well as domestic rivals – which usually isn't the best basis for courageous policy initiatives.

Volker Perthes is the CEO and director of Stiftung Wissenschaft und Politik (SWP), the German Institute for International and Security Affairs, in Berlin.

Home
Print
Newsletter
More on this topic
Global strategies for combating Islamic State: The intellectual battle against ISIslamic State (IS): A totalitarian, expansive and hegemonic projectStrategies for combating IS: Plea for a wide-angled view of the Arab worldThe Middle East in 2014: New regional power games
Related Topics
'Islamic State' | IS, History of the Near and Middle East, Islam and the West, Israeli-Palestinian conflict, Jihadism | Jihadists, Sunni-Shia tension, Syrian Civil War, Wahhabism
All Topics

The devaluation of the Egyptian pound combined with rising food prices is taking its toll on Egypt. More and more people are slipping into poverty. Karim El-Gawhary reports from ... END_OF_DOCUMENT_TOKEN_TO_BE_REPLACED

Egyptian Sufis have been on the defensive against the country's Islamists for decades. Meanwhile, interest in mysticism is growing among the young members of Cairo’s middle and ... END_OF_DOCUMENT_TOKEN_TO_BE_REPLACED

Abortions are illegal in Egypt unless they are necessary to save a married woman's life. But that doesn't stop local women from having one. Egyptian society needs to acknowledge ... END_OF_DOCUMENT_TOKEN_TO_BE_REPLACED

Food prices doubled, salaries halved, banks restricting withdrawals: Egyptians now have the same problems as the Lebanese. But if things get worse here, the fallout will be far ... END_OF_DOCUMENT_TOKEN_TO_BE_REPLACED

Giessen, Eichsfeld, Kusel, Berlin – cars bearing old German number plates are the latest trend on the streets of Cairo. Many Egyptians regard the discarded plates as chic. What ... END_OF_DOCUMENT_TOKEN_TO_BE_REPLACED

END_OF_DOCUMENT_TOKEN_TO_BE_REPLACED
Social media
and networks
Subscribe to our
newsletter